No Soccer is Here

This is not a column about rooting for the U.S. soccer team, I swear. Sort of. 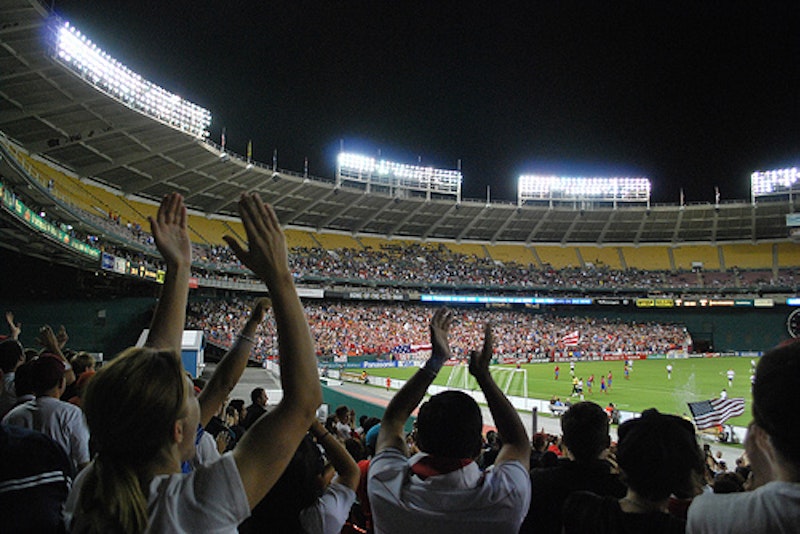 Crisler Arena, the home of University of Michigan basketball, was maybe one-quarter filled. We were losing to Indiana by what felt like 50 points, although it was probably 20. If you stuck out your index finger, you could practically poke the apathy, hanging thick in the air. We were on pace to post one of the worst seasons in the program’s history. Irrelevance held court.

As those of us who had bothered to show up shuffled out of the arena into the cold Michigan winter –  probably outnumbered by Indiana fans at this point—I thought about how different things could be. If the team just started winning, won a few big games, maybe made the tournament, hell, especially if they won some tournament games, well, then things would start to turn around. We would get noticed again, attracting the top talent. The arena would be full of our fans—always more fan than the half-empty Crisler packed with visitors. Kids would grow up wanting to play for Michigan again, it would be self-perpetuating. One day, we could maybe compete for a title or even establish ourselves as a powerhouse in a sport that isn’t even our primary concern! We would still love football more, of course, but who says we can’t kick ass in both?

That was in 2008. This year, we really did turn it around. We beat Duke at home. We made the tournament. We even won a game. Campus buzzed, games sold out, bars were full of fans—it was everything I could have hoped for even faster than expected. Maybe you know what that’s like. Maybe you’ve rooted for a team that the locals seemed ambivalent toward as long as they were stuck in mediocrity.

If you feel even a touch of empathy, then I hope you won’t turn away when I say this is exactly how I feel about U.S. soccer. Like virtually every soccer fan I know, it’s not my favorite sport. It’s not even my second or third favorite. But somehow, the U.S. Men’s National Team became one of my favorite teams, on par with Michigan sports, the Baltimore Orioles and the Baltimore Ravens. I don’t know how it happened, but one day in 2006, during the World Cup, I became obsessed. They were my team now.

Soccer has somehow come to represent an elitist other-ism, the sport of soccer moms and spoiled children. But today, the only elitism I see comes from the soccer haters. I hear Jim Rome spend five minutes disparaging what was a fairly impressive feat—defeating #1 Spain last week—accomplished by a team from the United States. If there was a huge curling upset during the winter Olympics, I doubt Rome would have spent an entire segment cutting down the Americans. Then I have to hear Chuck Klosterman whine on Bill Simmons’ podcast this week that a winning U.S. soccer team would only make the soccer “elitists” more insufferable.

I’d like to ask anyone who finds evidence of a tea-sipping shadowy soccer cabal to forward any tips my way. I don’t know where these elitists are. I’ve never met them. I’ve never seen them on the Internet or in books or newspapers. I haven’t really been able to discern any substantial differences between soccer coverage and that of other second/third-tier sports like hockey. In terms of being shoved down our throats, it definitely doesn’t compare to NASCAR, which was snatched up by major networks then given hours of daily commentary programming on ESPN.

What I can’t seem to figure out is why average viewership of the Olympics in 2006 was over 20 million per night—some of the worst ratings in years—while the U.S. national team garnered a measly 6.7 million against Italy in the World Cup six months later. Something is making people tune into curling to support America and tune out soccer to do the same. Indeed, it feels as though people like Rome or Klosterman are rooting against America just so they don’t have to talk or hear about the sport.

One thing that may have admittedly hurt the sport’s reputation as of late is the people who see soccer as a way for America to make a splash in the world’s sphere. When you’re used to such an insular sports culture and then discover this big world out there of which we are only a middling part, well, it can be intoxicating. But this is only a sideshow: it isn’t why I like soccer, nor why I want soccer to catch on.

Look, those of us—and I include myself—that want to see soccer take off in this country don’t want to see it supplant anything else. It would just be nice to develop a little bit of organic soccer interest, devotion, and culture to produce a few top players. And it would definitely be great to play Honduras in Chicago without ceding 80 percent of the stands to the visitors. You don’t have to start following it now or anything like that, but next summer in South Africa, gather up the family and flick on our games. Treat it like the Olympics, do your part for America, and stop the hate even if you don’t feel the love. Who knows, you may even like it. Or maybe, just maybe, your kid will fall in love and grow up to be the next Jozy Altidore. Lord knows we could use another.