I Knew He Was A Jerk All Along

Why we need to stop pretending an athlete's performance is any indication of his or her moral constitution. 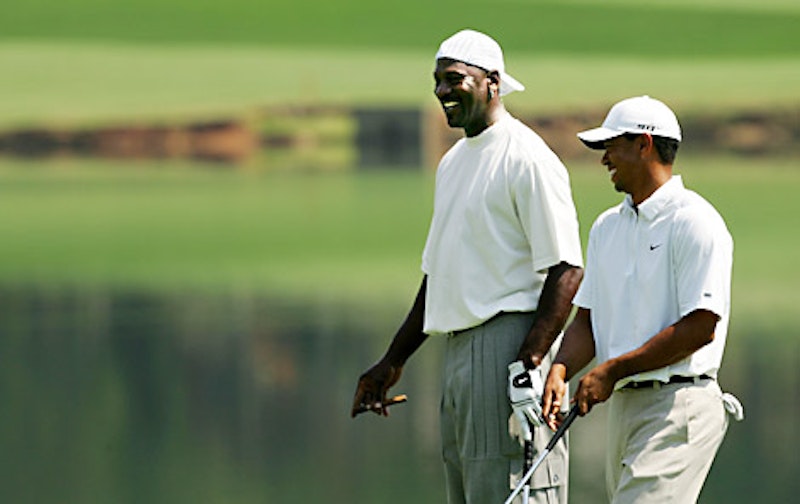 Tiger Woods does not feel guilt. Woods only vaguely touches what normal people understand as emotions. I bet words like "good" and "bad" only apply to a 352 yard drive with a slight draw into the wind  on 13 at Bethpage Black or putts that miss the cup lady's-side. So there is no use trying to figure out if Woods expressed genuine remorse in his press release yesterday or if he hired the same PR firm to write it for him. Idealistic rants about the dangerous proliferation of tabloid media will fall on deaf ears for as long as we continue to click on links that traffic in the personal lives of celebrities. So here is the question: Why do people enjoy acting surprised about Tiger Woods?

Trying to understand why strangers take more solace in the transgressions of the individuals that they root for, probably respect and even idolize is confusing. Ironically, nothing about the transgressions that Woods' engaged in should have surprised anyone: Esquire's Charlie Pierce revealed to the world Tiger's philandering proclivities back in a 1997 profile; the controversial voicemail that became public features a desperate man trying not to get caught by his wife. I don't know many adulterers, but it seems akin to someone looking back on a friend who turns out to be an alcoholic and saying, "Oh that makes sense, I never liked him anyway," and somehow experiencing a new feeling of justification.

It's not coincidental that Kobe Bryant, Michael Jordan and now Woods fall into the same category of sensationally talented individuals whose careers reach their daunting potential only to experience a moral tarnish. Jordan held the reputation of a notorious gambler. His affairs resulted in an ugly and public divorce. Bryant faced sexual assault charges back in 2003 that were eventually resolved in a civil settlement, but the public scrutiny that he faced resulted in the majority of his endorsement deals drying up. But while Bryant and Woods are contemporaries, the true reflection of Woods in terms of personality, acclaim, and reverence is Jordan.

The most defining image I have of Michael Jordan is his jump shot over Russell Westbrook in the 1998 finals to beat the Utah Jazz. Then I watched his induction speech to the Basketball Hall of Fame. I expected a regurgitation of the qualities that his image was crafted around: hustle, hard work, determination. But Jordan instead sounded like a spiteful shell of a once great man who did not know how to handle himself in the twilight of greatness. He questioned the height of the guy who beat him out for the varsity basketball team in high school; he repeatedly bashed Westbrook for calling him out before the game and failing. His Hall of Fame remarks are emblematic of the competitive urge that he is infamous for does not seem to exist innately in him, rather it is psychologically manufactured by his obsessive focus on every instance someone disrespected his ability. The satisfaction lay in the extent to which he proved them wrong. The accumulation of victory was not enough for Jordan.

I spoke with a friend of mine about the Woods melee and he seemed stymied that I even asked: "I don't know how he could do it. He's carved out this image of being a "great guy. Upstanding citizen, friendly, hard-working."

First, Woods is an upstanding citizen in the sense he is not a felon and probably pays his taxes, but not in the sense of the kind of guy you would want to leave in a room alone with your wife. Second, journalists have criticized Woods following multiple vulgar outbursts and club tossing incidents, but he does look friendly in those Buick commercials. I would call that a draw; not enough information.

I do agree that Woods worked diligently at the sport of golf. His preparation borderlines on obsessive. Perhaps the cut and dry image associated with Woods' success created that impression. Maybe this is a one-time mistake. Those who have a financial interest in his commercial success certainly had plenty of incentive to maintain that image for him.I think we tend to give the benefit of the doubt to individuals who work hard. We assume their work ethic speaks to their personal ethics. Time and again this is proven wrong.

Woods showed that he shared Jordan's obsession with the method of victory more than the victory itself dating back to 1997 when Charlie Pierce profiled him. According to Pierce, Woods took an unnecessary risk to prove that victory would not satisfy him and I think that is why we get up in arms over Tiger Woods. Woods, like Jordan, cannot make sense to normal people.
Normal people train and practice and behave because it is understood that's the gateway to success. Both Jordan and Woods threw themselves into situations that seemingly impeded their success, but maybe they subconsciously just needed something new to beat: themselves. They intrinsically understand the marginal value each victory holds, but the manner in which they sway the margins sometimes goes astray. Adultery, gambling. The early parts of their careers were spent dismantling their competition and the record books and the balance sheets. However, their actions, motivations and entire existence defy rationality, and the only way left to cope with that is to pretend you knew he was a jerk all along, that he gave you bad feeling one time. Because for normal people, winning is enough to feel successful, but for guys like Woods and Jordan, it is a way to feel.