The Birds of Baltimore aren’t the flashiest baseball team, but they’re quietly poised to compile their best record in 10 years. 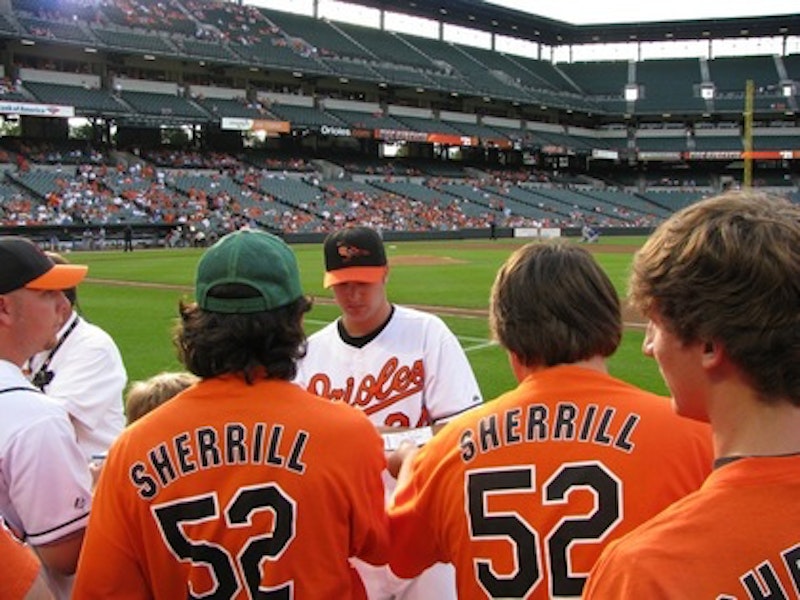 Not long ago, in this space, I speculated hastily that the Tampa Bay Rays would fade down the stretch and the surprise story of the 2008 MLB season would revolve around the Baltimore Orioles. That probably won’t happen, as it turns out, but it’s still curious to me why the O’s, almost unanimously picked in April to win maybe 70 games, haven’t attracted more national attention from the sports communications industry. It’s not as though the team hasn’t far surpassed expectations—as of July 22 they’re hovering around the .500 mark—and surely reporters, television gabbers and bloggers have the time and space to write and talk about more than just Scott Kazmir, Billy Beane’s 18th dismantling of the A’s, Jason Giambi’s hideous mustache, the blackballing of Barry Bonds, Josh Hamilton’s embrace of the Lord, and Manny Ramirez’s disgraceful scuffle with a sexagenarian Red Sox traveling secretary over an allotment of free tickets.

Although I’m a Bosox fan, I live in Baltimore, work with a few guys who favor the O’s and attend a lot of games at Camden Yards, and this is, in fact, a pretty interesting turnaround in what was expected to be a complete rebuilding season directed by the franchise’s impressive president Andy MacPhail. This might be off the mark, but I think the reason not many commentators give the O’s their deserved due is because it’s a team devoid of characters. The players don’t brawl, gaze at their home runs, fist-pump when completing a save or, with the exception of the goofy Kevin Millar, give colorful quotes after games.

Their manager, Dave Trembley, who toiled in the minor leagues, grinding it out for years, is stolid, earnest and…dull. He’s no Ozzie Guillen and doesn’t pretend to be. After a loss to the Tigers last Thursday night, one in which the O’s made three base-running blunders, Trembley unloaded in his standard post-game interview, slamming some unnamed reporters who “joked around” outside his office after the game. Saying that other managers like Jim Leyland or Tony LaRussa wouldn’t tolerate such behavior and would let loose with an expletive-ridden rant, he stated his feelings without such embellishments. “I hear everything, and I live and die with everything here. Not for Dave Trembley, but for the Baltimore Orioles. And if you think that’s a bunch of poppycock and this and that, people don’t know who I am.” Not exactly the dirt-kicking Earl Weaver, but Trembley’s the best manager this team’s had in years.

Daniel Cabrera, the 6’9” pitcher with a fastball that’s more lethal than a bullet, can cause a stir when he gets pissed off and throws behind batters, ignoring the consequences of the game situation—but that’s about it for angry young men. And Cabrera, who a few years ago was touted as a potential ace once he consistently threw strikes—some forget that Sandy Koufax couldn’t find home plate for a number of years when he started out with the Dodgers—might not last in this organization that’s no longer a doormat for the Sox and Yankees.

Here’s an example of what constitutes fireworks for the low-key Orioles. Last Saturday night, in a weird back-and-forth slugfest with the under-achieving Detroit Tigers (why that team, expected to run away with the A.L. Central, acquired Edgar Renteria and Dontrelle Willis in the off-season is anybody’s guess, but their sub-par performances have contributed to the team’s mediocre showing), the O’s Luke Scott, a smart pick-up in the Miguel Tejada trade with the Astros, hit a walk-off homer in the bottom of the 10th to give his team an improbable 11-10 win. (Improbable because Cabrera gave up six first-inning runs, driving the O’s excellent commentator Jim Palmer to utter distraction. Palmer’s full of himself and, like ESPN’s Joe Morgan, relives minute details of his Hall of Fame career a bit too often, but he’s by no means an O’s mouthpiece, unlike the chuckleheads who cover most MLB teams.) When Scott rounded third, ready to greet his teammates, he tossed his batting helmet and slid into home. He told a reporter at The Sun: “I was just so excited I couldn’t even contain myself. I was just having such a good time out there, just seeing all these clowns at home plate ready to kick me and beat me up.”

Gosh, Luke, that was zany! Just like an episode of Leave it to Beaver. Mind you, I’m not dumping on Scott at all—he’s got 17 home runs at this point and many have been clutch—but simply showing why this G-rated team isn’t all that colorful.

There’s nothing flashy about 24-year-old Nick Markakis, but he’s one of the best young players in the American League, not only for his outstanding play in right field, but consistency at the plate. Likewise, O’s mainstay and local favorite Brian Roberts steals a lot of bases, hits a lot of doubles, plays a solid second base and is the kind of player who’d be a huge asset to any team (in fact, Yanks GM Brian Cashman would never admit it, but he’d probably prefer Roberts over his lackadaisical Robinson Cano). The only clippings about Roberts concern his mention in the Mitchell Report—as if his alleged minor use of PED’s was uncommon—and the rumors earlier this year that he’d be traded to the pennant-starved Cubs.

Recently, the only O’s-generated controversy was over their closer George Sherrill (tied for second in the A.L. with 29 saves) pitching 2.1 innings in the endless All Star game last week. Some locals were cheesed off at Sox manager Terry Francona for keeping a one-inning guy out there for so long—although he threw just 25 pitches—imagining that he wanted to tax a player for an A.L. East rival. Francona called the Orioles braintrust the next day to express his admiration for Sherrill’s effort and called him the “hero of the day.” And for his part, Sherrill, 31, seemed to revel in the role he played in the eventual win for his league.

Sherrill, acquired last winter from the Mariners along with the budding superstar Adam Jones for the oft-injured and cranky Erik Bedard, has emerged as a fan favorite and I hope he doesn’t get moved as the July 31 trading deadline looms. In fact, Sherrill reacted this way to the rumors that some 10 teams are interested in picking him up: “It’s flattering to be the one that they keep asking about, but right now I’m an Oriole and proud of it… I want to stay here and win here, first and foremost.”
I went to an O’s-Royals game on July 1, the day after Sherrill had blown two consecutive saves, and he got a standing ovation from the nearly 20,000 fans in attendance. As it happened, the giveaway that night—when you’re playing Kansas City on a Monday night, some inducement makes sense—was a Sherrill t-shirt. Sitting in field level seats just past first base, my sons and I were floored at the huge number of people wearing those Sherrill shirts, creating a mass of orange at the park. (Unlike recent years, there is a lot of Orioles orange at Camden Yards, which has to cheer management). And they were rewarded when Sherrill righted himself and picked up the save in a 7-5 win.

Nearly two weeks later, the family attended an O’s-Rangers game and the crowd erupted when it was posted on the scoreboard that Sherrill had been selected as an All-Star. MacPhail doesn’t have an easy job trying to resurrect the franchise that aging owner Peter Angelos did his best to destroy, but he’s making more progress than anyone expected at this point in his tenure. It would give the city’s baseball fans a welcome jolt if, at the trading deadline, Angelos opened his wallet even a crack and allowed MacPhail to pick up a starting pitcher or two—even relative no-names from the National League could help the team’s rotation, its key weakness—and keep Sherrill in Baltimore. One more word of unsolicited advice: jettison Ramon Hernandez, a butcher behind the plate, and bring up minor league sensation Matt Wieters. That may go against the standard procedure of developing players, but the team’s fans would go nuts and besides, early call-ups have helped the Rays, for example, enormously in building a possible perennial contender. It’d be out of character for the O’s management to do something daring, but after 10 years of demoralization, the promotion of Wieters would add some zing to what’s already a surprisingly successful season.