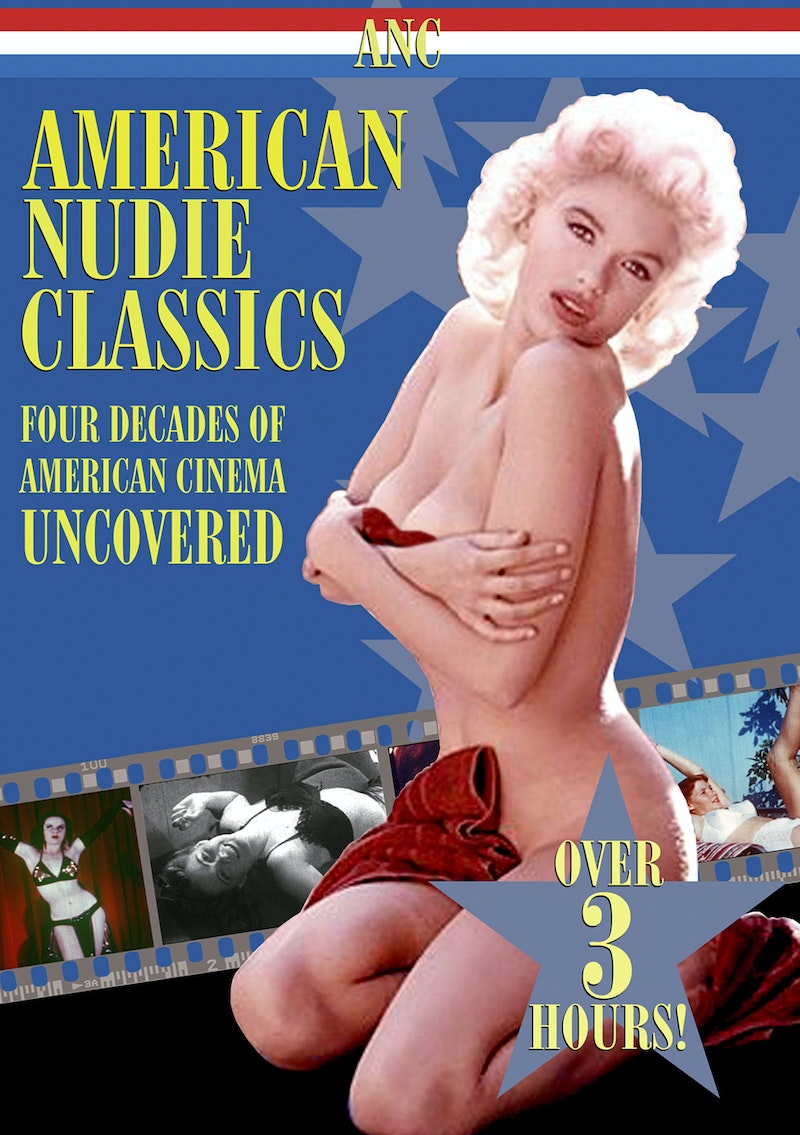 So, could that be? Could someone get off by watching this thing?

But while I can imagine less likely fetishes, the films collected here haven’t aged especially well, at least in terms of their originally-intended purpose. The clips from the 40s and 50s, in particular, are positively unsettling in their drab frankness. Women in states of undress gyrate with various degrees of enthusiasm in front of a remorselessly stationary camera. Sometimes, for variety, they wander around in a circle until you start to worry they’re going to get dizzy and collapse before they can remove that last little bit. “Stacey Farrell #4” is as good an example as any of the type—while big band music plays, a pleasantly horse-faced woman trots about the floor with a slightly embarrassed smile and the brisk efficiency of a high school gym instructor. When her breasts come out, they seem less insouciant than functional—like she’s a bureaucrat and is pulling out a sheaf of papers for you to sign. Except maybe that “sign my papers” sounds like it could maybe be a double entendre, and the breasts are less suggestive than that.

The 30s strips are no more sensual—though they are more varied. I’m not sure why this should be. Maybe film pornographers hadn’t quite hit upon one magic formula in the 30s, and so there was more experimentation. Or maybe whoever compiled the DVD just happened to find a broader range of clips for this decade than for the others.

Whatever the reason, though, it makes the six 30s clips significantly more interesting to watch than the balance of the DVD. Several of them are short skits, built around standard scenarios—girl discovered sunbathing nude; nudists go out to an island where a man steals their clothes; girls pose nude for an artist. Nothing especially unexpected … but still, once you commit to narrative, you can never tell what’s going to happen. The sunbathing skit, for example, spirals off to include FTM cross-dressing and an amateur detective improbably wearing what appears to be a Hasidic beard using his magnifying glass to examine a woman’s underwear. The nudists on the island crawl through each others legs and paddle each other as they go—that light spanking about as close as we get to kink on the disc, I think. The artist’s model skit ends up as a bizarre drawing room take on Cinderella—the artist rejects the two upper-crust girls who want to pose for him, and instead hires their servant. This prompts one of the disgusted rejects to tell her friend, “As an artist’s model, you’re a good chambermaid.” The nudity here is brief and decidedly secondary to the gag; the whole thing is so tame that it hardly feels like pornography at all.

In context, “Room Service” (“or,” as the title tells us, “Breakfast in Bed”) is something of a shock. It’s easily the most explicit thing on the disc, a brief flash of hardcore in a sea of just-barely-past-R. While it gets your attention, though, it’s not any sexier, in a conventional sense, than the other 30s pictures. Some of that is the brevity—you barely have a chance to be shocked before it’s over. Mostly, though, it’s the way the sex is presented. The woman being eaten out, for example, lies still with her arm thrown over her face. As a result, the act ends up feeling like a private moment rather than a performance. If there’s pleasure here, it hasn’t been packaged for the viewer; it’s not accessible.

Linda Williams, in her book Hard Core, argued, “The animating male fantasy of hard-core cinema might […] be described as the (impossible) attempt to capture visually the frenzy of the visible in a female body whose orgasmic excitement can never be objectively measured.” “Room Service” makes no effort to capture orgasmic excitement; it’s happy enough to just show the actions without the affect. As a result, it doesn’t read as hard core, even though it’s explicit.

The clips from the 60s, though, are a different story. These films are even more repetitive and staid than those from the 40s and 50s. In virtually every one, a woman reclines on a bed, strips off her clothes, and writhes around while funky and/or jazzy music plays in the background. Occasionally, the camera zooms in for a close-up of a nipple or a lip or a crotch.

Williams argues that the development of a pornographic fascination with female orgasm was perhaps a positive thing. Any “nostalgia for [old stag films] must also partake of a nostalgia for an age when male spectators of pornography could take their pleasure in investigating the woman without having to worry much about her pleasure,” she wrote. Maybe that’s so…though, on the other hand (and as I’m sure Williams would acknowledge) the demand that women not only present their wares but also enjoy doing so seems like it might have a downside as well. Part of the reason “Stacey Farrell” doesn’t read as sexy is because she ‘s so obviously going through the motions—which, decades ago, was perhaps sufficient. “Farrell” could keep a bland, cheerful autonomy without pretending her soul was touched—which maybe meant it wasn’t.

But whether it’s better not to care about women’s pleasure or better to care and demand it’s presentation on demand, one thing is clear—preferences have changed. The earlier clips aren’t unsexy because people didn’t know how to do sexy; they’re unsexy because what they thought of as sexy was different. Their fantasies were tied up in a genre—and both the genre and the fantasies are different now. There’s something eerie about that realization. Desire seems like such a private thing. But when you watch these films it’s hard not to wonder how much of what you want is what you want, and how much of it is just the arbitrary concupiscence of the decade in which you happen to be wanting.