What Women Want, According to Match.com

For starters, it helps to be a nonexistent composite of masculine archetypes. 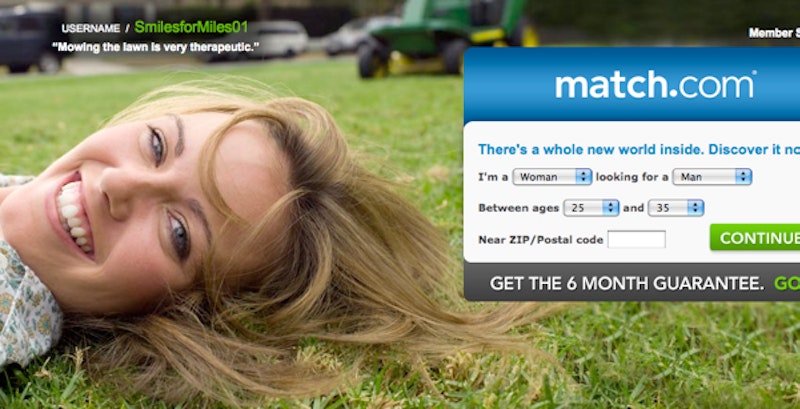 Sigmund Freud may have spoken for all men when he famously told his disciple Marie Bonaparte: "The great question that has never been answered and which I have not yet been able to answer, despite my 30 years of research into the feminine soul, is, What does a woman want?" Sadly, the princess's reply went unrecorded. Then again, Princess Bonaparte was renowned for her frigidity, so perhaps she was the wrong person to ask.

If a genius like Freud remained stumped by the elusiveness of women's desires, what makes the rest of us think we can figure it out? Vanity, perhaps. Then again, we have access to something Freud didn't have: Match.com.

After months of intensive analysis of the profiles of the women on Match.com, I am naïve enough to think I have a pretty good idea what women want. And, if I am right, it may turn out that Freud was over-thinking, that he was unnecessarily complicating something that is rather basic, and that the secret of what women want is not so profound and obscure as we think.

Women, like men, want different things at different stages of their lives. Because I am in my mid-40s, I was interested in looking at single women between the ages of 34-44. This is generally the age when single women begin to get serious about a relationship, if not downright panicky. That doesn't mean she is ready to settle for just anybody, however.

I was immediately struck by the similarity of the profiles on Match. Most women seemed to want the same things, employed the same language, read the same Oprah Book Club books, and were seeking the same mythological ubermensch. They were all "honest," "easy going," "independent," and "enjoying life to the fullest." They enjoyed "fulfilling" careers in marketing or pharmaceutical sales, and they were all at a good place in their lives, though they wouldn't mind a male companion with whom to go ice climbing up the north face of an Alaskan glacier. They all loved sushi, baseball games, and any event where you stand in line for a half-hour for a thimbleful of wine.

Basically, they are a composite of one woman whom we'll call Miss Match.

Miss Match is a deeply spiritual person. She is either a passionate Christian or is "spiritual, but not religious," having rejected traditional gods in favor of some vague sort of life force. Miss Match has at least one dog, usually a mix of something and a poodle, and she loves horses, though, thank God, she can't afford one.

It is no coincidence that nearly all of the women on Match describe themselves as outdoorsy. And by outdoorsy they don't just mean they enjoy a day at the beach. From reading their profiles you would think the Bataan Death March would be their ideal holiday: day after day of tramping through a tropical jungle. Besides countless photographs of dogs, Miss Match's profile is littered with photos of her scuba diving and skydiving. Admittedly, I found this confusing. Are these women trying to say they are vacuous thrill-seekers like the idiots on Jackass? Or was this a subtle warning to couch potatoes: "Be prepared to get your lazy butt off the sofa and into a parachute?"

Actually, the fortysomething female fixation on outdoor adventures is quite understandable. Most of the women you find on Match.com sit in a cubicle 40-plus hours a week staring at a spreadsheet. It is only natural they would desire to be outside on the weekend, if for no other reason than their bodies are starved for vitamin D. As it happens, a lot more men spend their work week outdoors. Hence a weekend al fresco does not hold the same fascination for men. What's more, maintaining that she "loves the outdoors" is Miss Match's subtle way of saying she is not a domestic. Few women will come right out and say they do not like to cook and that they loathe the role of homemaker. After all, rule number one on Match is: "Don't Be Negative."

What's more, Miss Match knows she is competing against women 20 years her junior, people who do not have to jump out of airplanes to demonstrate their fertility. Miss Match is simply trying to say that while she may be 44, she is not yet ready for her wheelchair.

But before all those potential Mr. Matches get the notion that she is just some reckless tomboy who never grew up, Miss Match slams on the brakes and reveals that she is a well-rounded, classy dame: "The real gems are the beauty and peace found in nature, but I also enjoy the lights and sounds of city-life," she waxes poetically. "I honestly love both and can easily go from getting my hands dirty on a multi-day backpack trip to dressing up for a night on the town."

So who is Miss Match's ideal match? Easy, she wants the male model on the cover of Men's Health magazine, assuming he is straight and without flaws and as compassionate as the Dalai Lama. He must be funny, but his humor cannot be overly dry or sarcastic. His glass is always half full, his outlook always sunny, and he is optimistic. He is in great shape, with six-pack abs, though he is not in the least obsessed with his body. If he is not a Christian, he is "spiritual, but not religious." He is financially secure, a leader of men, but he knows family comes first. He has season tickets for the hometown sports teams, but you will never find Mr. Match sitting in front of the TV in his boxer shorts Sunday afternoon watching football and swilling canned beer. And did I say he must love dogs? He is "that guy who can stargaze in the middle of the Ozark Mountain Trail or from the rooftop of Vin de Set."

Nothing ever flusters Mr. Match. There is no obstacle too high he cannot overcome. He never complains, never whines. When life throws him a curve, he knocks it out of the park. When life hands him lemons, well, you know.

He is, of course, a bachelor, but not because he fears commitment or prefers to play the field, but rather because he has been focusing on his career and has yet to meet Miss Match. Or he is divorced, tragically, but he never says an unkind word about his ex-wife. Despite his rough, chiseled masculine good lucks he knows how to be tender and soft. He knows how a woman wants to be treated and touched. Amazingly, he never says a stupid word. And he is curiously attracted to fortysomething girls who jump out of airplanes.

Needless to say, my immersion into the world of Match.com left me feeling somewhat depressed. I still don't believe most women like going to baseball games (except maybe to people-watch or to be seen), nor do I believe that given the choice between strolling around the mall or scaling an ice cliff that they would choose the latter.

If Freud were to ask me what women want, I think I would have to reply that they want a man that does not exist. In their feverish obsession not to settle, women have excluded perhaps 90 percent of men who, in one way or another, do not make the cut.