We Are Afraid of the Penis

A Manhunt Mobile billboard in Los Angeles has some up in arms. 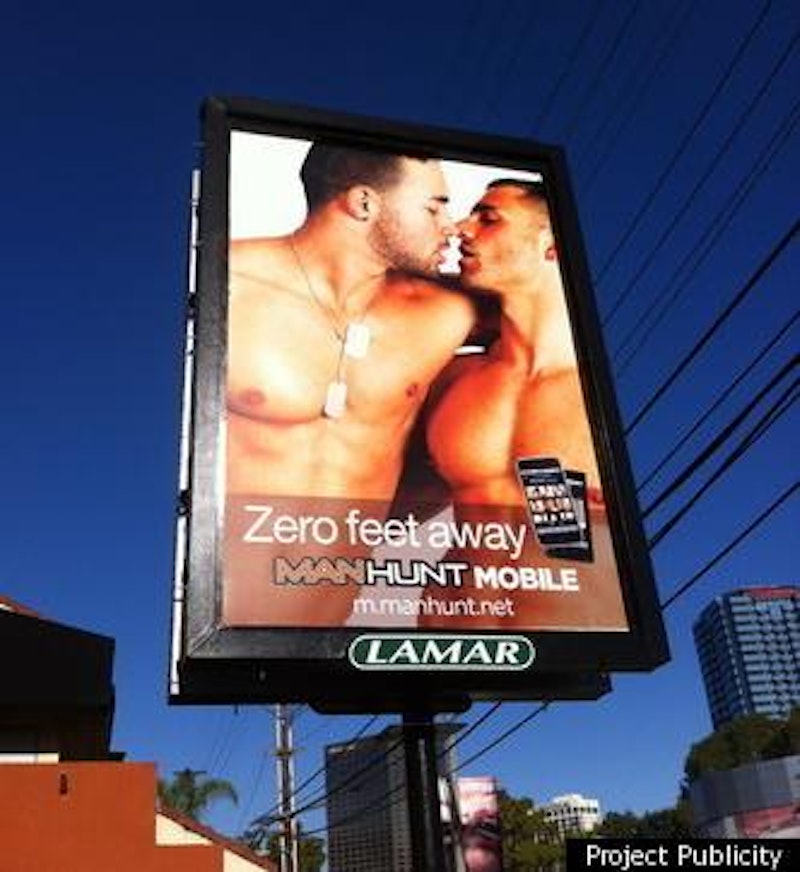 There’s a Manhunt advertisement featuring two hot, very tan, dog tag-wearing gay dudes on the precipice of making out that’s getting some L.A. mommies’ leopard print Snuggies in a bunch. The billboard, a plug for Manhunt Mobile, Manhunt’s very own GRINDR-inspired, location-based hook up app, has some moms upset because it’s too just close to the neighborhood elementary schools and bakeries for comfort.

“You try explaining the “Zero feet away MANHUNT MOBILE” phone application to your 9-year-old son. A 9-year-old who loves Army guys, and so noticed the dog tags right away,” explained Kelly Cole, a self-professed “liberal feminist complaining about a sex-positive, homosexual billboard.” I have a hard time judging this situation since I don’t have children, so who knows how far I’d go to protect little Dior. But I’d like to think that if he asked me about what they were doing in an ad like that, I’d probably be like, They’re just really good friends.

I understand not wanting to have the sex talk with your nine-year old child on his way to soccer practice, and really no parent wants to have the sex talk with his or her child ever. He will discover it on the Internet anyway! But the fact is that images of sex are everywhere, from television to countless other aspects of visual culture. The real tea is that for the broad American population, even the “liberal feminist” sector, gay male sexuality is threatening, frightening, and scary precisely because two men, father figures, are not supposed to be doing that. We expect our men to be strong, builders, father figures, doers. Dad fixes the sink when it’s clogged with too much chili. Dad works on things in the garage. The idea that two male figures would engage in some kind of intercourse is frightening because inevitably one of the male partners will get penetrated or be subservient to the other—which some see as a feminized gesture—and thus strips away stereotypical manliness.

One time I asked my grandmother about gay sex. Can you believe it? I think I was still too young to realize what gay was or even what sex was for that matter. But I had heard about “gay people” because they/we were on the television all the time. So I asked her, point blank, “Grandma, how do gay people have sex?” And she said, with a look of pure disgust, “In the booty.” And I think I followed up with something like, “But how? With what?” Her disgust in explaining the juicy details of gay butt sex is virtually the same logic that goes behind straight guys being into two chicks getting busy, whereas the idea of two guys working loads out of each other is disgusting, gross, appalling, and needs to be censored immediately. It’s the same reason that there are more lesbian sex scenes and innuendos on television and in popular culture than gay ones.

Look—we are afraid of the penis. So the potential for two penises getting together can really ruin somebody’s day. I have never seen a stiff penis, or even a flaccid one, on any television show or movie that was out and visible for more than five seconds. Okay, well I guess there was Shortbus, but still. Even Boogie Nights, the most notorious huge cock movie ever, didn’t feature Mark Walhberg’s real penis. And let’s not forget about that HBO “Hung” which has us believe that the main character is exactly that, except we never get see it. I need me some proof!

Despite the lack of peen on the screen, I have seen numerous breasts and vaginas, not on request, on a range of sources throughout visual culture. Why is it that female sexuality is so much easier to accept, to visualize, to objectify, than male sexuality? Why is it that nearly every movie about college has a lesbian innuendo, but a similar thing between two dudes would either be a farce or receive a bunch of “boo’s” from the audience?

For some reason, this positively harmless Manhunt ad has been called “pornographic.” I don’t see anything even remotely pornographic about this billboard. So why does gay sex—even when there’s not any visible gay sex—get tied to pornography? Gay male sexuality seems to only work for the masses when it’s neutered—when it’s completely emptied out of even the slightest suggestion of sexual activity. Think about any gay characters from television today—none of them get laid. They just sit there looking cute, and are of course happy to deliver a fabulous quip. I understand that we don’t want to talk to our kids about sex of any kind. But the way to protect our children is perhaps not by huffing and puffing and shielding their eyes from what they’ll discover on their own anyway, but to be honest or at least learn to tell a quick white lie.

Several of these Manhunt ads have been taken down since the news broke, which is a shame. If only younger gay kids had more sex-positive gay images in the visual culture they grow up in, we might be able to speed up and solidify the coming out process.