Everyone loves an attention-seeking slut. 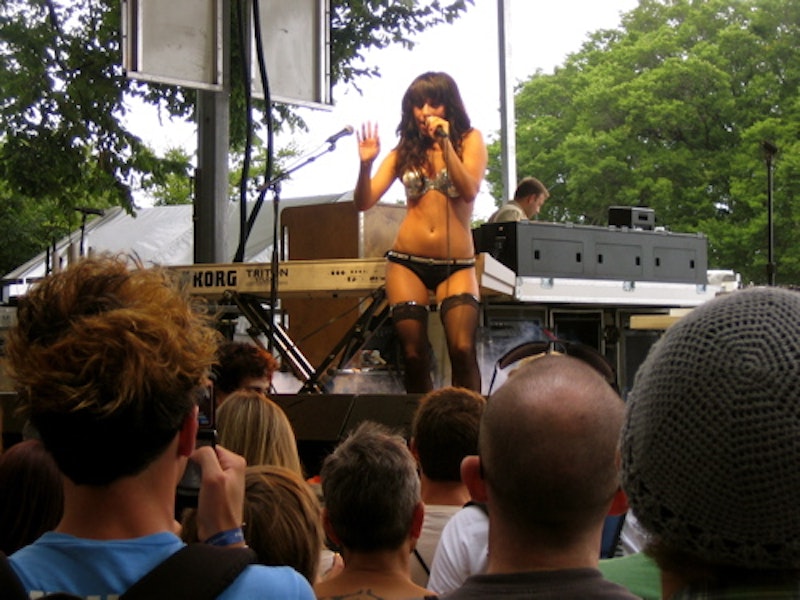 When I Love the 2010's airs in 10 or 20 years, Lady GaGa will define our era’s popular music. A semi-interesting artist and a shrewd self-promoter, GaGa has gone from literally nobody to the biggest celebrity in the world in just four years, an astonishing and confusing accomplishment that deserves some respect. Focusing on her image more than her music, GaGa has presented herself as a kind of modern provocateur, daring to do what no one else will and wear what no one else would ever think of. Most of it's bullshit of course, and I'm still not convinced she's more than a flash in the pan musically (with only an album and a half to her name, GaGa hasn't released any new music in almost a year, despite extreme overexposure). But GaGa’s at the forefront of a contemporary cadre of young female lead singers who use sex appeal in a more conspicuous way than ever before. Artists like GaGa, Ke$ha, and Katy Perry are leading the way in Slutwave.

A Slutwave artist follows a pretty simple formula: be reasonably attractive, don't wear clothes, get a handful of super catchy songs built for saturation, and boom, you've got Katy Perry on The Today Show, or GaGa at Lollapalooza. And while GaGa is certainly more adept at marketing herself and playing up the fashion aspect of her art, those bizarre outfits are only justification to stare at her body, drool slipping from one's lips. Ke$ha is more brutish and to the point, bragging about making out with chicks, digging clothes out of dumpsters, drinking too much, and being stupid. Perry embraces the same disarmingly blunt tone, freely talking about Googling herself, craving attention, being manipulative, and getting high with Snoop Dogg. Posing in her underwear on the cover of the most recent issue of Rolling Stone, Perry has also identified herself as a slut riding the wave.

Those same teenyboppers who once worshipped Britney and Justin are at the foot of Miley's altar now, or Justin Bieber's. Slutwave isn't teaching preteens to be promiscuous/stupid, and its target audience skews a little older than Britney's did in the early 2000s. I'm curious to see where this aesthetic goes in the future. Because really, where can it go without becoming pornography? A photo was leaked a couple of months ago of Ke$ha covered in semen, with a dazed "I've-just-been-fucked" look and a general aura of slut. Stunts like this, and GaGa throwing herself into the crowd to be groped and licked at Lollapalooza, would've sunk these stars just a decade ago. But now, it's part of their m.o., people would feel gypped if they didn't get to see some skin/genitalia. Wherever the Slutwave happens to crest, a camera will be there, and it will be glorious.