Phone etiquette among the non-telephonic generation: It ain't easy. 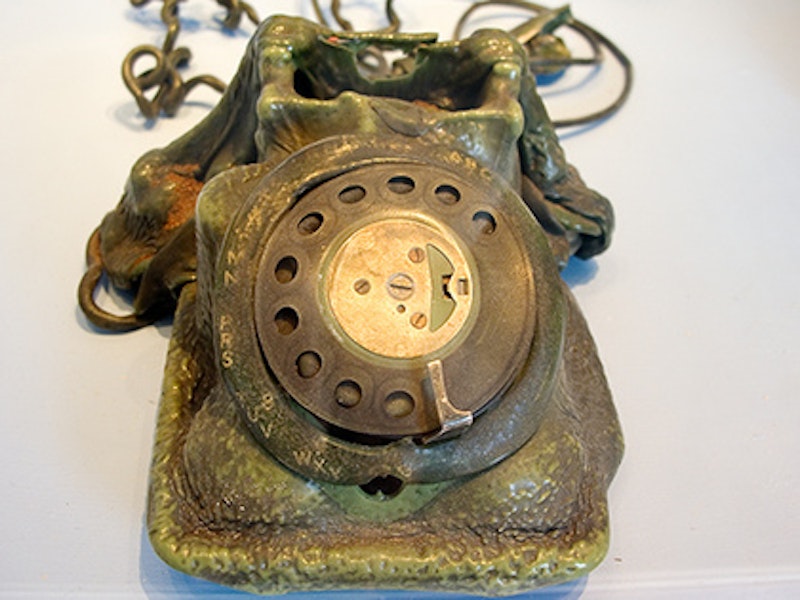 My throat runs dry at the sound of the beep. The way the very superstitious hide their faces from cameras, I shrink from voicemail services—for fear they might steal my soul!

I told Reggie this the other day, after he regaled me of a whole relationship he recently began and ended via text message. “She never called me!” he said mystified. “Just all these text messages throughout the day. I should have saved them,” he said woefully, twirling his pasta.

“She was probably afraid to call,” I told him not on the phone but over dinner at a restaurant in the East Village. “There should be a Latin name for this fear,” I told him. “For phone phobia,” I said. “A lot of people probably have it.”

“You think she was afraid for her soul?” he asked.

“No. Just has an awkward phone manner is my guess, and was afraid to commit it to voicemail.”

Who of us hasn’t, after all, at one time or another gotten off the phone dejected after having tried and failed to leave a light-hearted voicemail? “Yup, I won’t be hearing from him/her again,” you think putting your phone away after having left a catastrophically awkward message. You know it while it’s happening too, though there’s no remedy. The harder you try, it seems, the worse it gets—the more stilted, the more sad and desperate it all flows out. You’re crashing, you know, as you try to effect confidence though your plane is nosing downward—“So, call me back, okay?”—crash and burn. You had started with the best of intentions. You were so confident when you dialed. What happened?

The beginning of any affair is a veritable minefield. It’s no wonder that so many of us look to texting for reprieve. My friend Ronald told me of a whole relationship he had recently consisting solely of the sending and receiving of LOL cats. It went on for months that way, he said, without them ever having to see each other. When I asked him if he at all missed the actual relationship part of the relationship, he said he was just so relieved to finally be a part of something that worked, that he didn’t want to nitpick. “Why press it any further,” he explained, “and not just enjoy it for what it is?” But this fairytale of Ronald’s is a rarity, and won’t do as a solution for most of us unfortunately, whose goal it is to actually see the person at some point.

Most of my friends have fashioned some method of dealing with their audio performance anxiety. My friend Felix precedes his initial phone calls to women with the ceremony of 10 push-ups so as to get the blood flowing. My friend May precedes hers with the application of three beers or more. For a while I would listen to marching band music before I made the call to someone I liked. A little Sousa would put me in the fight mood, I thought, and up my confidence 10-fold. A girl I know recommends making flash cards when you plan on calling a boy (as she likes to call men), with topics for discussion in case you get nervous and go blank. I never do that for fear of sounding too rehearsed, which is just the opposite impression one hopes to give. These days, I mostly just wing it. This method either works or fails miserably. It’s dangerous territory, this effortless spontaneity.

The actual call, assuming it’s answered, is the least of one’s worries. Conversations are fluid. A stupid thing said can be corrected by another stupid thing said immediately after. It’s the voicemail that is the trap as it is on record, and further and more frighteningly, is without the mitigating collaboration of the other person. It is 100 percent you.

Added to the normal phone anxiety that sneaks up on everyone, I possess an uncommonly awkward phone manner. Friends are always telling me that I sound depressed when they call. In most of my phone conversations the question comes up, “Iris, is anything wrong?” There usually isn’t, except that I can’t seem to adjust my communications to phone mode. Perhaps this perception of sadness results from a lack of vocalizing on my part, which in face-to-face conversation, I make up for through body language. Odd pauses and silences that in person suggest my thoughtfulness on the phone suggest only ghostliness. Owing to that, I’ve tried introducing more sounds during phone calls. Like “Wow” and “That’s great,” trying in this way to deliberately communicate good cheer. This often comes out stilted though, making me sound like a happy robot. Or a depressed robot pretending to be happy.

My relationships seem to terminate almost always if a man gets my voicemail in the early stages of our dating. For this reason I try to be a quick draw with my phone when it rings. Unfortunately though, there are such times when even I am unavailable. And like this our signals can be crossed too easily. I’ve even started to consider that it might be these very messages that cause me to miss out all too frequently on those ever-elusive second and third dates I’ve been hearing so much about.

It is Wednesday, say. I arrive home from an evening out and check my voice mail. A mixture of dread and hope washes over me as I hear Jimmy’s voice reprised on my service. Jimmy, the second date of my dreams!

“Uhh, this is Jim. Ummm. So, uhhh. Just calling to say hello. Uhh, give me a call back when you get a chance.” Seems straight forward enough on the surface, but his message, I am sure, is riddled with horrors, the result of him having finally heard my voicemail greeting with its unmistakable mixture of melancholy and mania. My voicemail greeting has betrayed my couth leading him to discover my true identity as a desperate lunatic, I’m sure.

Let me break it down:

“This is Jim”—subtle declaration of an earnest, but nevertheless flawed psyche—“Who am I?” this translates to, which tells us both finally that this will never work.

“Ummm”—He’s thinking, I sort of had a good time on the last date. I guess I’m kind of interested. She’s probably easy. I’ll ask her out and get her drunk.

“So, uhhh, just calling to say hello.”—Then again, last time we went out I blew a hundred on her at the bar, didn’t get lucky. Yeah, I’ll just say hi and not ask her out. It’s too much work.

“Call me back when you get a chance”—Placate her, but get off the phone at all costs! She likes you too much. She is going to fall in love with you. You don’t have to pick up the phone when she calls you back. The important thing is to just get off the phone now!

Happy that he’s called, my heart warms, perhaps he likes me, too. I should not keep him waiting too long, and so I call him back immediately, as I’d want him to do the same. Nervous and excited, it’s Wednesday night and only 11:30! I dial his number thinking to invite him to meet me, why not now?

Voice mail comes on. His is chipper, light hearted, funny even. “Yo, it’s Jim. You know what to do.”

Indeed I do… And so I muster all my nonchalance and whimsy and begin: “So uh, yeah, hi, just got in, got your message, thought I’d call you back… You’re probably out doing crazy things. I just stole a car, myself…[throat clearing sound] well, talk to you soon then. Call me. This is Iris, by the way. Smyles. Miss Jackson if you’re nasty. Haha, No seriously, this is Iris. Okay. Hope you’re well. Talk soon, kiddo. Yeah, Okay. Okay, Bye.”

You know how it ends. Me, the telephone by my side singing its silent aria for the next few days until, at last a jug of Burgundy washes me up on the shores of the weekend. The Saturday afternoon movie is Beverly Hills Cop once again. They’re showing it twice in a row on TBS. I watch it both times on mute, listening instead to my heart full of broken electronic equipment from Radio Shack (who also got my number and never called) clanging about the hollow cave in my chest, making a noise that is everything but the ring of a phone. It’s Saturday again. I call Reggie and ask him to call me back just to make sure my ringer is working.

“Hi Reggie,” I say, answering the phone after it rings loud and clear. We talk for a while about Beverly Hills Cop. He is watching it too. And then he tells me about this new girl he is seeing. Not so much seeing yet, but they’ve been “poking” each other on Facebook. “In my day, to poke someone meant something entirely different,” I say.

“What do you mean, your day? You’re younger than me!”

“Yet I feel so old, Reggie. I don’t know,” I say and pause—for too long again. “Wow,” I throw in, making an effort to express levity.

“Is anything wrong?” Reggie asks.

I confess, “I don’t feel at home in this world.”

He bites into an apple, I guess from the sound of it, either that or crushes the spine of a small animal between his incisors.

“So what do you think would be a good Latin name for my phone phobia?” I say, reintroducing the subject from last week’s dinner. He’s quiet for a while and then suggests, “Erectile dysfunction.”