Pimp With a Heart of Gold

When pimps rule the world, everybody's a whore. 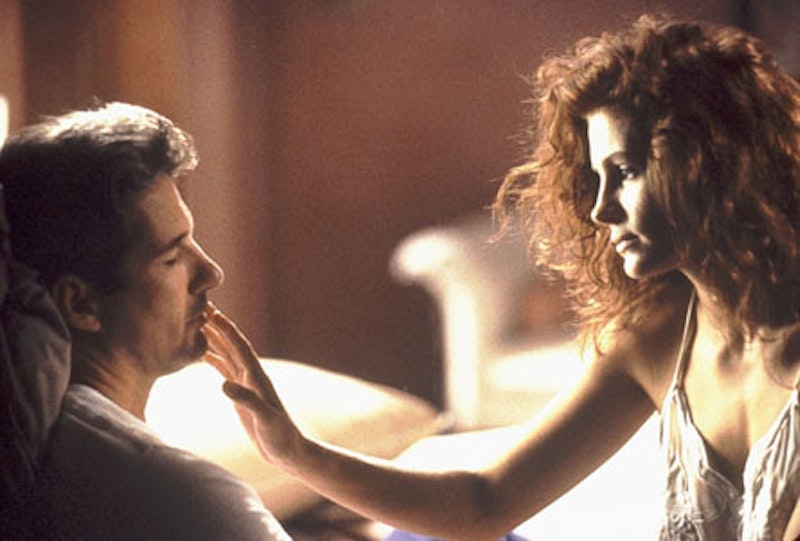 The first scene of Pretty Woman (1990) is devoted to the ritzy lifestyle and rocky romantic life of financier Edward Lewis (Richard Gere). Edward is the guest of honor at a massive LA soirée for his obscenely wealthy business associates and friends. In quick succession, he breaks up with his girlfriend by phone, seeks affirmation from a now-married ex, and drives off with the hot car of his asshole-but-subservient lawyer, Philip (Jason Alexander). It's only after this montage of privilege and pique that we turn our attention to the female lead, the prostitute-with-heart-of, Vivian (Julia Roberts.) The first shot of her we see, however, focuses not on her heart, but on her panty-clad ass, followed quickly (as she turns over in bed) by a close-up of her crotch.

Pretty Woman, and its treatment of women, was in the news this week when Miss Ohio cited Julia Roberts' character as a positive role model for women. This sparked a predictable, and justifiable, backlash, encapsulated by Amanda Marcotte who pointed out that Roberts' "character is functionally a warm-blooded dress up doll with no will of her own."  Along similar lines, Crooks and Liars took the opportunity to quote Darryl Hannah, who in 2007 said that "[O]ne of the things I'm most proud of is refusing to take Julia's role in Pretty Woman." She went on, "Every time I see it I like it less and less. They sold it as a romantic fairytale when in fact it's a story about a prostitute who becomes a lady by being kept by a rich and powerful man. I think that film is degrading for the whole of womankind."

I don't really disagree with either Marcotte or Hannah—Pretty Woman, as that opening crotch shot makes immediately clear, treats its main character as a body to be dressed up, eyed, manipulated, condescended to, and fucked. The film appears to grant Vivian's every wish—riches, a perfect lover, a happy-ever-after ending. But in defining those wishes in such a limited way, and by robbing her of agency in their fulfillment, it ends up treating her with a systematic and remorseless contempt.

If you want to read against the film, then, I think you have to do it by taking your eyes off Vivian, and focusing instead on Edward. Admittedly, this is difficult to do, since Julia Roberts is appealing and funny and animated and Richard Gere has the proportional charisma and energy of a gray-suited slug.

Beneath that colorless exterior, though, there lurks a well of bland viciousness. Edward makes obscene amounts of money by buying companies, selling them off in pieces, and fucking over whoever gets in his way. His job is his life, not just in the sense that he works all the time, but in the sense that it defines how he sees everyone around him. He uses people as things. As I mentioned, one of his first acts of the movie is to break up with his girlfriend because she isn't jumping through all the hoops he wants her to; shortly thereafter he drives off in his employee's car without permission just because he feels like it. He dickers with Vivian over how much he'll pay her to spend a week as his escort, and then gloats about how he got her for a bargain price—which is supposed to be cute and flirtatious, but given the power disparities and how much money he has, just ends up seeming like he's a miserly asshole. And, of course, his business dealings are vile. At one point, he finds out that the shipbuilding company he wants to purchase has a defense contract in the works that will make its stock spike. So he calls his pal the Senator and tells him to hold up the contract in committee. It's okay though; political corruption and naked influence peddling are charming when you're cute like Richard Gere.

Of course, the film is aware that Edward is a dick. He had a bad relationship with his father and as a result has difficulty expressing emotions. The love of Vivian, though, is supposed to transform him. He takes a day of work; he smiles more; he decides to go easy in his business dealings. Instead of breaking apart the shipbuilding company and selling it for parts, he decides to invest in it. He is no longer a parasitic financial leech; instead he's a patriotic enabler of America's global imperialism. "I'm proud of you!" declares the elderly shipbuilder whose company Gere has decided to spare, and it's a lovely father-son moment. Daddy issues resolved.

From this perspective, Pretty Woman isn't really about Vivian's retooling; it's about Edward's. Vivian gets new clothes, but she doesn't really change as a person. The emotional dynamics of the film depend on her being the same charmer from the beginning to the end. That charm saves Edward and teaches him how to be a good man—which is to say, it teaches him how to exercise patriarchal power with a touch of generosity and emotion. He still is surrounded with sycophantic servants, but he treats them better. He learns the name of the manager of the hotel where he's staying; he brings Vivian flowers, and will apparently take her to New York with him rather than just putting her up in an apartment in LA. Furthermore, the limo driver seems touched to see Vivian and Edward get together. Who doesn't revel in the happiness of their betters, after all?

In the beginning, then, Edward purchases Vivian to be at his sexual and romantic beck and call. In the end, he's learned that you shouldn't treat people that way. So instead, he uses Vivian to make him slightly kinder and slightly gentler and to help him work through his issues with older men. Thus Vivian goes from being a blow-up doll for wanking to being a blow-up doll for emotional growth. Not exactly an inspiring career arc, but that's hardly her fault. When pimps rule the world, everybody's a whore—even, or perhaps especially, if we're supposed to believe that the biggest pimp has a heart of gold.