Give Someone an STD Anonymously 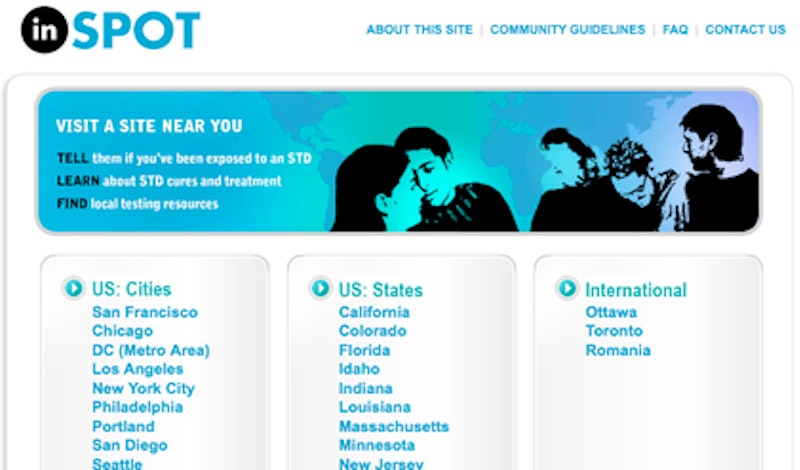 You’re spending a wild night out on the town with your fierced-out, leggings-as-pants wearing girlfriends. Goal for the night? Get laid, obvi. You’re dancing around and mingling and making a general asshat of yourself. You’ve had one Cosmo or Long Island too many. Enter the stroke of midnight. Ugh oh—no viable “asspects.” What a quandary! Drunk with horniness, you reluctantly decide to go home with that one guy who bought you a drink. The problem is, you fear that in real lighting, Drink Man has the potential to be majorly ugly. I mean really ugly. But hey, maybe he’ll have a huge cock. “He can’t be that annoying if I’m sitting on his face,” you rationalize.

The next day you receive the following anonymous e-card: “It’s not what you brought to the party, it’s what you left with. I left with Gonorrhea. You might have, too. Get checked out soon.”

A little website called Inspot.org allows your boyfriends, girlfriends, exes and hook-ups to send an anonymous e-greeting saying you might have contracted gonorrhea, crabs or, oh, HIV from them. Ain’t that some shit? They allow you to pick the prettiest card, and you even get to send a cute personal message, too! All that’s missing is a box of Godiva chocolates.

I know I delete countless spam daily—most of them for penile enlargement and erectile dysfunction. But who the hell wants to receive a spam message telling them that the ugly guy they didn’t want to sleep with was a ho? Lemme tell you what they need: they need a companion service that lets you anonymously send a response to they ass. “You a nasty trollop. Oh! And your dick ain’t even that big!”

See, that’s why I never got into the whole sleep-around-with-as-many-people-as-humanly possible gig. For one thing, sex can be gross and embarrassing. Right? It’s sticky and, depending on the type of lube you use, it can be incredibly viscous.        Why you want to go around, ass all viscous, hooking up with people you don’t know? On the real.

I think that’s partly why I stopped going out to nightclubs. I couldn’t deal with the high school nature of gay clubs. And I never liked that, more often than not, the prize of the night was whom you went home with.

Of course, some people will say that the STD emails are all gravy or whatever because at least they’re a responsible way to let the people you fuck know that they’re gonna get a surprise. It’s better to send an anonymous email than to let the other person be sick and not know why. “It might burn a little the next time you pee! Oops! Sorry about it!”

I guess what bothers me about the STD emails is that they’re the latest example of how human relationships are becoming less and less interactive, and more virtual by the second. I recently overheard this girl talk about how she felt to be going out on a date with a guy from J-Date, and how she carefully crafted her profile page to attract a certain type of guy; if you don’t update your Facebook status every hour you’re like not even real anymore. And believe it or not, I met the man of my dreams on a gay dating site, and so did my best friend. So online dating sites do work.

What’s great about them is that they allow you to be your best self for the world. You can pick the best pictures and add the right music to convey what you’re like as a person. Online dating sites are about creating community, or about joining whatever community you see fit. Alternatively, it’s a way for all of us who are too chicken to hit on that hot guy or girl in our “Race, Gender and Sexuality” class. You can zoom past the peeps who don’t match your interests and on and on.

But while online dating websites and the Internet obviously facilitate dating, the apparently unavoidable consequence is a decline in responsibility for, um, real human relationships. People are so busy communicating via text messages, AIM, You- and XTube that it is easy to forget that relationships are about people, not the “send” button.

For example, one time this guy I dated broke up with me via email. It was totally un-fierce.

When I didn’t respond to the message, he called just to ask if I got it. My response? “Yeah I got it. What the hell was I supposed to say in response? ‘RU4REAL’?”

Hey, I’m all for technology and websites and the Internet. I just can’t help but see the STD emails as an impersonal, irresponsible way to not be held accountable for your actions. I worry that it could become a crutch for excusing irresponsibility. It’s like you’re saying, “I know I have this STD, but I’m going to fuck you now anyway and then send u an anonymous email and you’ll never know what happened! Hey, I was responsible!”

I say if you have an STD and you’re still determined to have sex, tell that person beforehand. Don’t be so interested in getting off that you forget that a human is not a cyborg. And if you later find out you have an STD, you should be upfront and not fucking anonymous about telling your sex partners. Your partners have a right to know.

I mean, what next? An automated STD phone call?