You Can’t Blame the Advertising 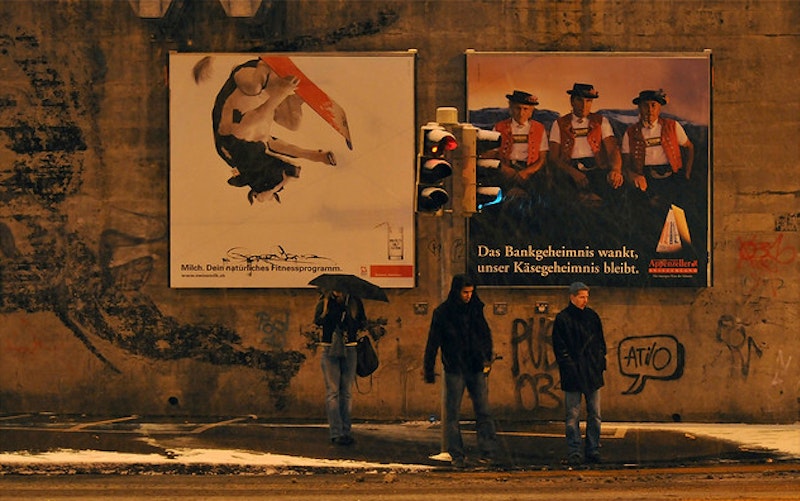 Chris Ofili: It’s a distant scene, an image taken from the viewpoint of someone who’s not there.

Shepard Fairey: You can only see this when you are wearing sunglasses.

Ofili: Did either of us have a camera?

Fairey: No. It’s a Taoist thing.

Ofili: An exit. The less you know beforehand, the purer the read.

Fairey: Definitely. As long as the cops don’t know me that well.

Fairey: It was an abandoned building, so I don’t know why they cared.

Fairey: That’s something I had to come to terms with. One day he sees them working up in this building and he sees them doing something that looks like chemistry and then the next day the cops come and tear down the whole camp and run everyone off and destroy the building.

Ofili: I thought, to further the feeling of shame, he needed to be exposed.

Fairey: He seemed like the only contemporary person doing poster propaganda. When the cops came, he was shaking.

Ofili: One says that he hung himself and the other that he exploded.

Fairey: He was going off on me, and I realized that when people don’t know what something is, they feel threatened by it.

Ofili: He lived on the beach. Context is everything.

Fairey: People that are slaves to fashion are pathetic and I feel sorry for them, but they also make me mad because they usually use that as a weapon against other people that don’t care about fashion as much because that’s a way they can feel that they are superior.

Ofili: If you hadn't told that lie the first time around, it wouldn't be perpetuated.

Fairey: You can’t blame the advertising. I don’t know whether that’s good or bad.

Ofili: I find a way to translate it into my own experience. But at what point is the subject not the subject anymore?

Fairey: In a way, it’s like saying I participate in this thing that is rebellious and I am not a normal conformist. To think that Coke would do that is so ridiculous, but I would definitely do it if the time were right.

Ofili: (laughter) Why are you here?