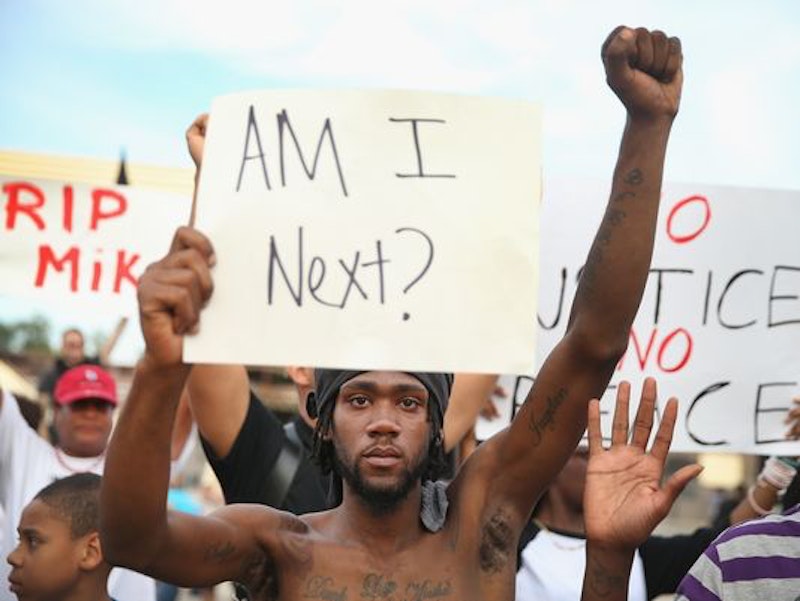 Some white people recoil when they hear about race. As a black man who’s had friendships and sex, partied, worked, taught and conversed with whites all my life, I know this is true.

I’m amazed how often I encounter white people who honestly believe race is one of two things: 1) a concoction of the liberal media or 2) an old fashioned symptom we did away with at the end of slavery. You think that because we have a black president now or because slavery was “such a long time ago,” or because segregation ended (it hasn’t) that race is no longer an issue?

You get to dislike the concept of race. We get killed.

Just because you don’t like the concept of race—and don’t necessarily experience race, let’s be real—this doesn’t minimize or invalidate the systemic, cultural and institutional effects of racism and white supremacy that millions of brown people face every single motherfucking day.

It’s not your fault, and no one is blaming you for centuries of old wrongs. But you need to know that turning a blind eye to race doesn’t make it go away.

There’s the even more troublesomely race-blind “I don’t see color,” a phrase I learned white people believe is a progressive political stance steeped in the lie of a post-racial society. But white people are the only ones living the post-racial lie. Brown bodies, who are violently arrested for crossing streets and which lay dead for hours and are shot for carrying toy guns, are not. So many of my closest white friends, who are intelligent, compassionate and politically liberal, or so I think, have said that they “don’t see color” without understanding that the reason they “don’t see color” is because they are white. This is the defining feature of white privilege.

For white people, the decision not to indict Darren Wilson for his cold-blooded murder of Michael Brown is all about the facts. “I’ve seen all the facts”; “I’ve studied the evidence”; “Facts are facts,” people are saying on Facebook, Twitter and on comments to the thousands of articles on the subject. But the Brown decision is not about facts, especially knowing that even facts can be biased depending on how you look at something. If the attorneys were not interested in prosecuting Wilson, then by all means the “facts” they present to the grand jury are going to be biased.

So no, this is not a case about “all the facts,” especially knowing key facts and lines of questioning that could have incriminated Wilson and which would have emerged in a fair trial. So no, this is not a case about facts. It is about histories and legacies of white police violence against black bodies in a place like St. Louis, where racism is strong, alive and booming, as described particularly well by The New Yorker’s recent cover image depicting a “Broken Arch” with equal parts that are divided but don’t come together in harmony.

This is a case about centuries of stereotypes and public displays of black and brown bodies as animals and Hulk Hogans and extra-human “demons,” and about differentiating black bodies from white bodies by describing in video game level detail how much more beastly and aggressive we are than white people.

Against black bodies, white people are always dainty, innocent and simply protecting themselves from the specter of the big black donkey-dicked beast.

This is a case about why police officers get to be above the law, or why so many Americans of all backgrounds buy into the bold-faced lie that the American military industrial complex is there to “Protect and Serve,” that it will always do the right thing and that law enforcement are not biased, racist, sexist, transphobic or homophobic.

People think racism takes tangible form—that a cold-blooded racist looks like a skinhead or has to be vocally anti-brown screaming “I am racist!” But like most systems of institutional power, racism doesn’t necessarily reveal itself the way we think and it is nearly always invisible to the naked eye.

Why are Robert Pattinson fans tormenting his fabulous and talented brown girlfriend FKA Twigs? Why did Hunger Games fans go apeshit when black people played what they imaged as white parts in the movie? Why is Ridley Scott producing a $100 million dollar movie about Egypt with an all-white cast? Why are movies with black leads that win top film awards almost always about slavery?

But enough “why’s—let’s talk about when. When will black people enjoy the same socio-cultural power and status that our music and viral dance moves and our catch phrases and our Shonda Rhimes’ and our Olivia Popes and our Beyoncés and our Nene Leaks’ and our RuPauls and our Nicki Minajs and our fashion styles and our singing and rapping styles and our patterns of speech and our underground art forms and foods and other cultural productions seem to have in contemporary culture?