While My Guitar Gently Pukes

It’s no fun playing music live when felled by the flu. 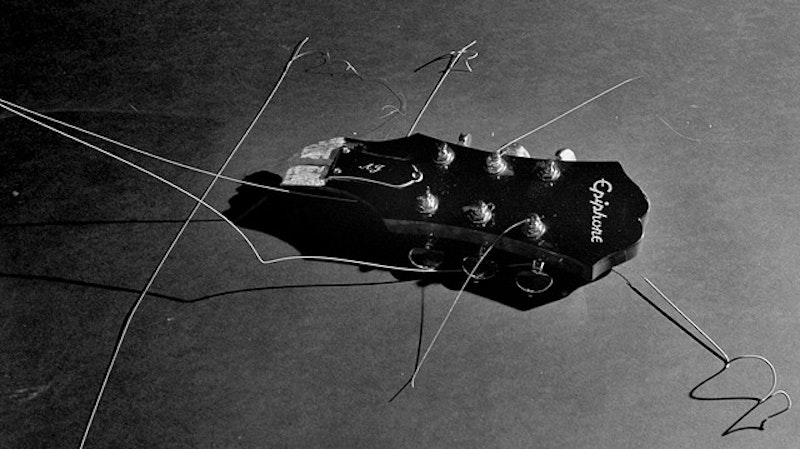 Last week I endured a brutal flu. I’ve a weak stomach to begin with, and any bug that attacks the gut sends my fragile constitution into total dysfunction. I got home from work last Tuesday wrought with the worst nausea I’ve had since I was a little kid—three particularly bad bouts stick out, in 1999, 2004, and 2006—where it goes past nausea. You just enter into a weird fugue state where everything makes you want to puke: thinking about anything, doing anything, not concentrating on not throwing up. It passes after a day or two: you’re still sick for a week, but any relief from that radiating, dull pain is welcomed. You can’t do anything but put your palms in your eyes, drink water, maybe listen to a song, a movie, but anything and everything you enjoy normally now attacks you with stinging unease, and it’s so bad you feel like you’re hallucinating.

I had a solo show at Baltimore’s Club K the day after I came down with the flu, and was in no condition to go out and hang around a black light, Orange Soju, lasers, ravers, cravers, and quadraphonic Japanese television broadcasts. I was especially bummed because it was the first time I had played or been to Club K, the city’s newest (and almost nightly) noise friendly D.I.Y. shoebox, and the lineup was more or less all friends. Third to play, preceded by my fabulous roommates Oskar and Guam of Kisses, I felt ready to ralph the whole time, achy and sick, drained of any enthusiasm for where I was or what I was doing. I felt the flu’s dissociative qualities especially that night, I questioned if playing was even worth it, despite the crowd.

Five minutes before the set, I’m burdened with headaches and a racing heart, normal pre-show jitters amplified by no food and 1,000,000 mg’s of Vitamin C. I chain together my lanky arc of guitar pedals, slanking them awkwardly across the floor as I try to remember to plug everything in and dial in the correct settings. Without enough patches, Oskar lends me four long quarter-inch cables to complete my chain, making my guitar’s tone sound brittle and distant. I play two new songs—“A Smuggler’s Bible” and “Takes T to Tango”—using rudimentary beats on a drum machine, and the mix is flaccid, but I rush through them, choosing instead to close with two old, well worn rockers, “Cuped” and “Daniel,” parts I could play under anesthetic.

The songs have room to jam, and I let them go haywire, cutting through my pain with heinous, trebly feedback and destroyed scales, songs that start off euphoric and rhythmic and end in complete cacophony. I toss my guitar in the air and miraculously catch it by the neck, pressing it against my amp and pulling away to rein this noise hell to its rightfully scorched conclusion. I terminate the abuse after 10 minutes or so, and luckily, we all agreed it was consensual catharsis, and I felt a little bit better, but only because I knew I didn’t have a show to play anymore.