Last weekend, Rick Ross survived a drive-by shooting. It's high time that he started exploiting it. 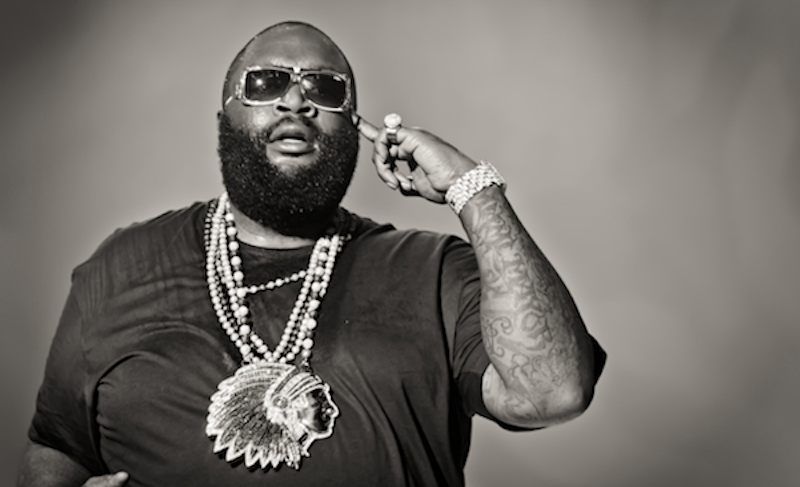 A gunman opened fire on the rapper Rick Ross early Monday morning as he drove his Rolls Royce down East Las Olas Boulevard in Fort Lauderdale, Fla., causing him to lose control of his car and crash into an apartment building, the police said. No one was injured, and the gunman escaped.

7. At the end of an all-star remix of Lil Wayne's "Love Me," Rick Ross thanks the gunman and extends an invite to a Grammy after party. 50 Cent, who is also in the studio, chuckles knowingly.

6. Rick Ross begins to reference David Cronenberg's Crash and Pulp Fiction in random, jarring ways on songs, declaring himself "Skidz Rozsay" and launching an ill-advised campaign to resurrect SKIDZ until Fonzworth Bentley talks him down during a star-studded intervention at the 2014 Source Awards.

5. Maybach Music house producers are ordered to surreptitiously loop samples of Kendrick Lamar's automatic-fire doot-doot-doot-doot-doot ad lib from "The Jig Is Up" and Kanye West's "too cool for the safe belt" lyric from "Through The Wire" into all Maybach Music productions through 2015.

4. Rick Ross rechristens himself "Balaclava Rozsay," commits to marketing silk balaclavas and donning them in public, raps incessantly about obscure Russian oligarchs and their molls, tours Siberia in winter with entourage consisting of men of similar build wearing identical balaclavas.

3. Rick Ross devotes a ton of new verses to cats, and the number of lives cats purportedly have, and how if he was a regular person it would be logical for the superstitious in his audience to assume that he's got eight lives left now, except that owing to his enormous personal wealth and prestige Rick Ross possesses a gold-plated quonset hut full of feline lives in an armored compound on Pluto, guarded by platinum Sentinels.

1. The rap world gets the post-smash up mixtape it deserves—demands—dedicated to describing, in perversely microscopic detail, how lavish and opulent Rick Ross' wrecked automobile was. At the denouement of the 18-cut tape, Rick Ross reveals that the car was merely "a throwaway."