Which Christmas Misfit Are You? 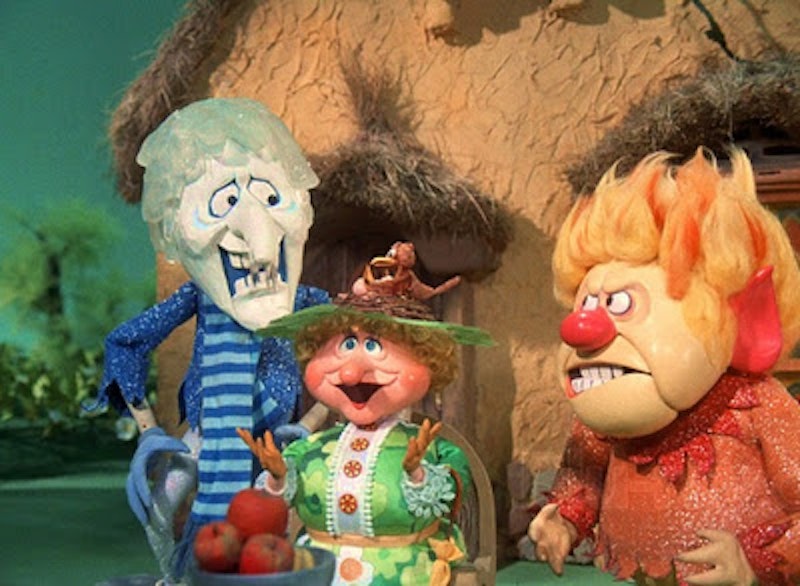 If you grew up with a television in your house in the 1960s and 70s, chances are you’re quite familiar with the works of Arthur Rankin, Jr. and Jules Bass. From Rudolph the Red Nosed Reindeer (1964) and Frosty the Snowman (1969) to their more obscure works like Nestor, The Long-Eared Christmas Donkey (1977) and Mouse on the Mayflower (1968), most of the major holidays were covered with stop-motion and/or traditional animation. Though I liked The Little Drummer Boy (1968) growing up, my favorite was always The Year Without a Santa Claus (1974) featuring the antics of the dysfunctional brothers Heat Miser and Snow Miser, their fabulously glitter-clad backup dancers and domineering matriarch, Mother Nature.

There are themes in Rankin/Bass “animagic” television specials. Writer Romeo Muller and musical director Maury Laws had a formulaic equation of awkward misfit outcast meets adorable creatures plus villain and snappy songs equals TV magic. It worked. I still know the words to every one of those songs and often quote them. They’ve become pop culture standard for the Generation X and beyond. The celebration of the misfit—whether it’s square wheels, a jelly-squirting gun or the innocence of polka dots—is something that stays with us year after year, as many Xer parents consider these classics required viewing for our kids.

So this year we ask: which beloved Rankin/Bass misfit archetype are you?

The Dictatorial Asshole: “Who doesn’t think of totalitarian dictatorships and their impoverished, subjugated masses when on the topic of Christmas?” asks Steven Romano in his article “Five Unsettling Things You Never Realized About Rankin-Bass Christmas Specials,” and it’s a fair question. Burgermeister Meisterburger from Santa Claus is Comin’ to Town (1970), with his German accent, lederhosen and collection and burning of toys in his village (Sombertown) is about as close to a cartoonish Hitler as animation has ever gotten.

“In case the allusions to the Holocaust weren’t blunt enough, there is also an elderly man, the Winter Warlock, hiding in the woods. He is skeletal, and his beard is long and scraggly and white. He is voiced by Keenan Wynn, the son of Ed Wynn (born Isaiah Edwin Leopold), one of Vaudeville’s brightest stars. Wynn Jr. makes the character, who later asks to be known simply as Winter, sound like Albert Brooks on a chicken soup binge, a graying Jew who is all self-doubt and shtick and exasperation and kindness.

I let my cocoa grow cold. How could I have missed the painfully obvious fact that my beloved escapist cartoon was essentially about a struggle between a sadistic Bavarian dictator and a kindly old Jew, with Kris Kringle stepping in to save the day like a red-clad, ho-ho-hoing Oskar Schindler?”

The Hysterical, Whiny Girl/Hippie Slut: Women don’t get the best of treatments by Rankin and Bass. The series of Mrs. Claus’ throughout the specials have a tendency to be hysterical and whiny and/or henpecky of Santa, with the notable exception of Shirley Booth as Mrs. C in The Year Without a Santa Claus. Her charming feminist tune “Anyone Can Be Santa” in which she actually "fantasized" cross-dressing, makes it clear that a girl can wear the suit, too.

But Rudolph’s mom, Clarice the reindeer, Frosty’s friend Karen: all super whiny. No one is whinier than Dolly, the doll from the island of misfit toys in Rudolph. And why is she a misfit toy in the first place? Though she lives on the island of misfit toys, there doesn’t appear to be anything wrong with her. Alas, her hysteria secret was revealed on NPR's Wait Wait Don’t Tell Me news quiz show (broadcast December 8, 2007) when Rudolph's producer, Arthur Rankin Jr. said, “Dolly's problem was psychological, caused from being abandoned by her mistress and suffering depression from feeling unloved.”

The oddest representation of a female is Jessica (the future Mrs. Claus) singing “My World is Beginning Today” (in front of the heil-Burgermeister statue)—she is completely tripping with her blossoming metaphor flower, swirly mushroom dots and realization that now that she’s found a man she can begin her life as a ho-ho-housewife. Yawn.

The Gay Loner: The most notable Christmas misfit is Rudolph the red-nosed reindeer himself (voiced in the original special by a woman); his differentness is right in the title. The Charlie-in-the-Box toy isn’t even hiding it with his stereotypical lisp. And the Miser brothers are in a musical. But is Rudolph (with that beard-reindeer Clarice by his side) gay?

Domenick Scudera rewrote the lyrics for the Huffington Post:

J. Christopher Arrison in his article “Coming Out in Christmastown” writes:

“In recent years, perhaps no group has identified more with Rudolph’s central story than the gay community, many of whom believe that the special’s creators, Arthur Rankin Jr. and Jules Bass, intentionally created an allegory depicting their struggle for acceptance. Rudolph exhibits sheer flamboyance. He was born this way and should not need to conceal his true self.”

And what about Hermey the elf, who doesn’t like to make toys? Don we now. Gay. “With his grand swoop of blonde hair and delicate speaking voice, Hermey is a closeted elf desperate to follow his heart’s desire amongst belligerent peers,” writes Arrison.