Living it up with America's favorite blind tenor. 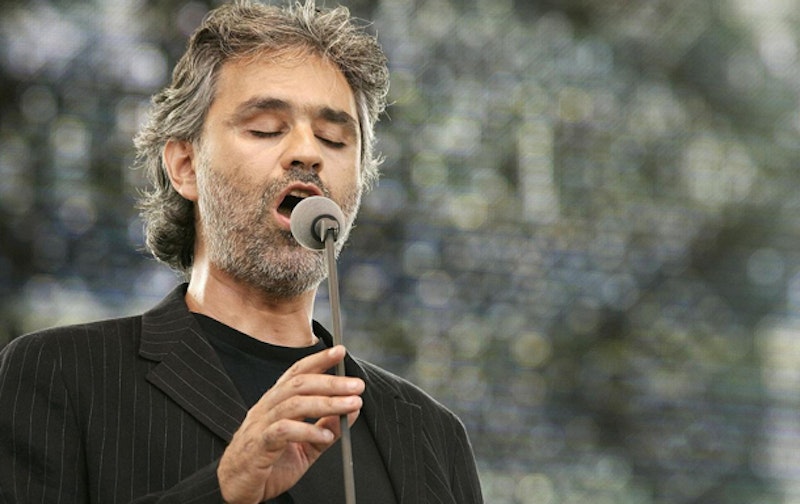 Andrea Bocelli sometimes stands motionless, for hours, on one of the more elevated turrets of his beachfront Maui castle, the breeze tickling his chest hair and singeing his nostrils, taking in the cries of gulls and the carefree laughter of children. Then he enjoys a judicious sip of Chardonnay.

Early in his career, Andrea Bocelli was prone, in concert situations, to off-putting Mitch Hedberg impersonations between sets.

Andrea Bocelli occasionally busks on the streets of blighted urban centers, just for sport, then delights in the aural havoc wrought by throwing the fruits of his labors into the air, "making it rain."

As a rule, Andrea Bocelli is never photographed without Isobel, Rita, and Estaban, the trio of snow leopards he keeps as pets, which creates difficulties for the corps of paparazzi that follow him and for the gangs of staff photographers his management team employs to shoot album covers, promotional glossies, and portraits. The snow leopards, schizophrenic and bloodthirsty, are typically edited out or replaced by cherubs bearing bouquets of roses.

When Just For Men reached out to Andrea Bocelli's agent with a sponsorship deal, Bocelli decided to sleep on it; this was a difficult decision for him. He didn't need the money, and, while reasonably vain, could not actually see the white and gray strands dominating his finely-manicured beard and rarely worried about them. After consulting clergy, Bocelli consented to sign a deal with the brand, but pledged his earnings as donations to the National Institute for the Blind.

Andrea Bocelli sometimes dreams that he is not, in fact, a beloved Italian tenor with album sales of more than 80 million worldwide—that he is, in actuality, Mr. Roarke, a character portrayed by Ricardo Montalban on the television program Fantasy Island, and that as Mr. Roarke he is plagued, sometimes, by dreams that suggest that, in actuality, he is an enormously successful Italian tenor named Andrea Bocelli, living the high life in a dystopian, semi-distant future time.

Andrea Bocelli is the owner of 1000 tailored white suits of varying textures, cuts, and styles.

Each Christmas, Andrea Bocelli works an incognito shift as Santa Claus at F.A.O. Schwarz in New York City for charity—even though, secretly, Andrea Bocelli fucking loathes Christmas, detests the holiday and all it signifies, is sick to death of being mistaken for Jesus.