What the Fuck Happened to Christina Aguilera? 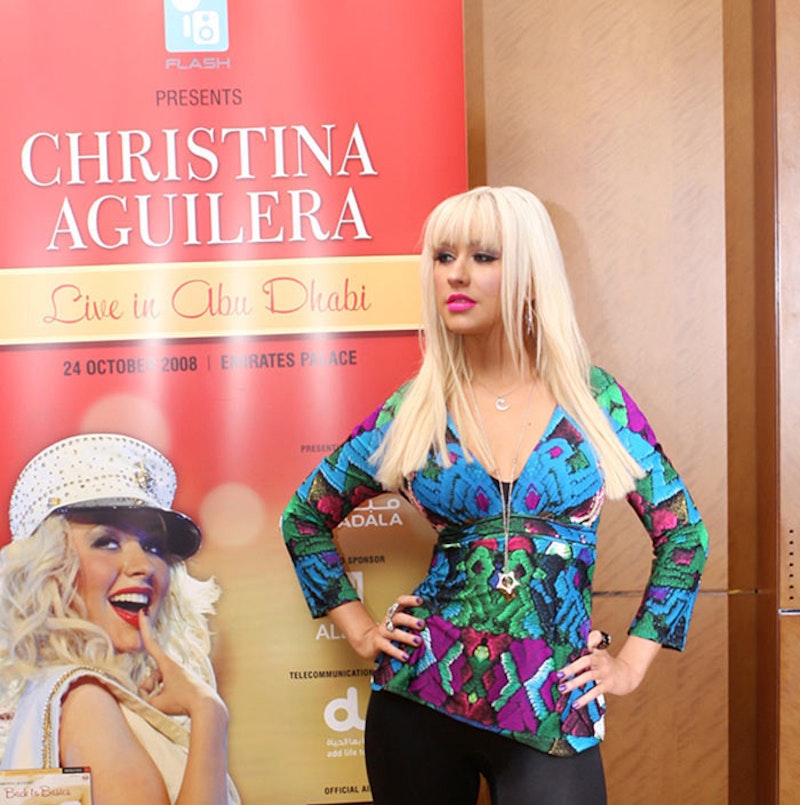 I watched Christina Aguilera perform on the American Music Awards a few Sundays ago, and let me tell you: the performance was all kinds of trifling. Too bad, because I bet the performance was supposed to be some sort of promotion for her movie Burlesque. I felt sorry for X-Tina the whole time she was up on stage, though. She just looked so tired, which is kind of impossible given that she was recently d-r-o-p-p-e-d from her record label. And, um, she’s not on tour or doing anything else, so there’s really nothing to be tired about.

The more I sat there watching this train wreck and shaking my head, the more I wondered: What the fuck happened to Christina Aguilera?

Wherefore art thou, Christina? Doesn’t everybody remember when she was the shit? Her transformation from “Genie In A Bottle” to “Dirrrty” was pure perfection, and Stripped is obviously my favorite X-Tina album. Back then, when I used to jam to her on my way to class, and when all the gays would freak out to her on the dance floor, X-Tina was making a name for herself in a world dominated by Britney Spears. Brit Brit always made good tunes, but I always looked to Christina to be risky. She had the multi-colored dreadlocks. She had the gay dudes making out in her music video. This is the woman who can seriously blow—all she has to do is squint her eyes “like this,” hold one finger in the air, and before you know it she’s hitting notes you didn’t even realize were there.

And now? Listening to her most recent album, Bionic; it sounds like Christina is trying too hard. When I first heard from the blogosphere that she would be working with Ladytron, I thought “Oh that should be really interesting!” Ladytron is a fabulous British electronic/New Wave band that does exciting things with sonic textures, and with Christina’s voice the results could have been neat. The eventual sound, though, was too unsure of itself, too worried about feeling current without offering anything new and worth playing on our iPods over and over.

In a pop music world alternatively controlled by Rihanna, Ke$ha, and Lady Gaga, Christina Aguilera’s voice doesn’t even sound relevant anymore. When she opens her mouth, like she did during that performance at the American Music Awards, do you want to know what I hear? I hear 1998, and that was like 12 years ago, people. You can’t keep a career as a pop star being 12 years behind. Our fair Christina is like a relic from another period. Part of the problem may be that Christina has too much voice, which I guess doesn’t really work in our Everybody Is Auto Tuned era. But even that’s not true, because my new BFF Florence, from Florence + The Machine, can blow her British ass off. Her music is incredibly catchy, and you can tell that she has enormous vocal talent.

If Christina wants to revamp her musical career, and I think she can, she needs to rethink her approach to pop music. Somebody get this girl a new image, and fast! She needs a fabulous new sound and enough with the bleached blond hair already. Am I wrong for thinking that Christina came back to pop music with this kind of defiant posture, convinced her fans would still love her because she is CHRISTINA AGUILERA in all caps? Sorry, Chris! We’ve got Lady Gaga and Amy Winehouse now, and Gaga is always changing outfits and Amy wears that big pouf on her head. Plus she’s white and British but sounds old and black. So you’re going to have to beat that to get our attention now, Christina! By the way, Amy Winehouse recently laid down a cover of Lesley Gore’s 1963 classic “It’s My Party” for her new album. So good. The ball’s in your court, X-Tina.