I Don't Have Bieber Fever 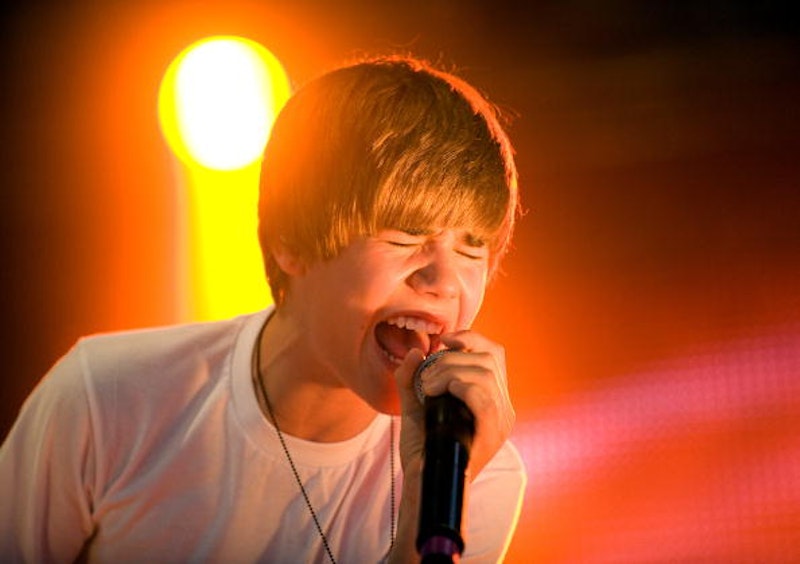 If you’re like me, you have a 10-year-old niece who is slowly maneuvering herself into the position of Supreme Overlord of Hell via a series of carefully crafted tantrums and a wall of elaborate Facebook lies. You probably also know that there’s a Justin Bieber movie coming out.

Not only is this movie going to be shown on actual movie screens and consume valuable natural resources, but it’s also going to be a biographical film. As if exploring the few short, embarrassingly inane years of the Bieberverse isn’t an insulting prospect enough, it’s also going to be in 3D. I’m not sure what he’ll be doing that warrants him invading anyone’s personal spaces, virtual or not, but allow me to feel both violated and bored on behalf of us all.

I don’t know if it’s cool or not to sarcastically blog about Bieber anymore, and frankly, I don’t really care. The Bieber Thing always been more of a non-entity for me, since the cult of celebrity nauseates me, and to concern myself with the affairs of homogenized little brats with no sense of critical thinking doesn’t fit into my schedule. Should I visit the toy store, the quiet urge to slip my pocketknife into the Try Me hole on the singing Bieber action figures and give it a quick, gut-popping twist is only a fleeting one. I don’t bear a grudge against a barely articulate, androgynous child who is obviously powerless against the momentum that’s been placed behind him. He’s like a plastic beach chair caught up in a tsunami. I just prefer to keep a safe distance from giving a fuck. Unfortunately, when you have a small child loudly declaring that Bieber Fever has afflicted her on a daily basis, reminding you of the throbbing mediocrity of the world, the bitterness begins to simmer.

So, when the niece requests an out-of-production, expensive Webkinz Peace Puppy for Christmas and you don’t capitulate quickly enough, the exceedingly delicate holiday game changes. And this is how I became part of the problem.

Justin Bieber’s Never Say Never is scheduled to hit my area sometime next year, and the niece will either be in attendance, wearing her Biebershirt and Bieberglasses and other “collectible” Bieberphenalia, or else the immediate family might not survive the night. In the interest of survival and keeping the already sickly Christmas Spirit afloat, I bought the girl a $38 movie ticket, which covers the cost of a branded glowstick and a lanyard, as well as inexplicably high FedEx shipping. Despite the fact that I explained that tickets wouldn’t start shipping for a few weeks, the niece still proceeded to tear through any mail that came to the house addressed to me until I convinced her that it was totally illegal.

So, I’ve contributed to the creepy Bieber Empire, and I don’t feel good about it. I feel like I bought a Hummer and intentionally hit a family of deer. Or like I just punched a morally ambiguous baby, catalyzing its slow transformation into the world’s next Hitler or Glenn Beck.

But I can also sympathize, just a little. When I was 10, I was grossly preoccupied with Nintendo. I can still remember what that preoccupation felt like: an all-consuming mega-thought that burnt like a little ember at the base of my skull, even when it wasn’t at the forefront of my mind. I strove to turn everything around me into something Nintendo-related, and I sifted through every minute detail of every game I could find. At the end of it all, when I realized what had gripped me, I felt a little gross and embarrassed. It was an education in the nature of obsession that most kids have to go through—a kind of blurriness that clarifies the world. I don’t know if this is a common experience, but I hope that it is, at the very least, common among my questionable genetic kin.

So, I await the collapse of my niece’s Bieberphilia, hoping that it doesn’t transform into her mother’s old Marilyn-Manson-and-screwing-every-boy-in-town phase. Vlogbrother John Green posits that the cure to Bieber Fever is a dose of The Mountain Goats. Since that only elicited moaning and stupid faces when it was administered, there’s only one hope left: common sense. And if there’s a way I can extract $38 worth of life back from Bieber, I’m all over it.