Adventures in auditing a course titled “Sex, Drugs, and Comedy.” 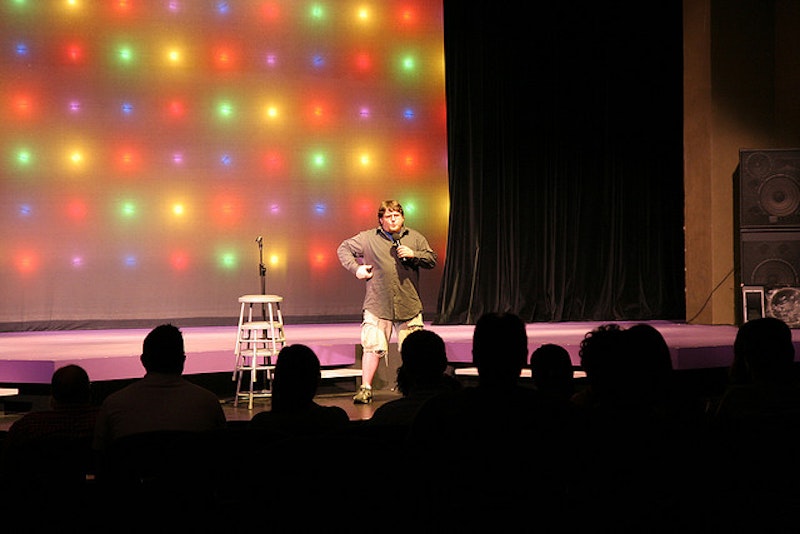 This semester I’m auditing a fabulous graduate sociology course at The New School on “Sex, Drugs, and Comedy.” For fun! Whenever I tell people I’m in this thing, I always emphasize the fact that we’re gonna be participating in the trifecta (sex, drugs, and comedy), which only makes it that much more rad, and totally unlike anything that would ever be offered at my home university. But just for the record this is not a “bong for all”—it’s not like everybody can just bring in their cocaine, or whatever—where we do drugs in class and talk about how it “feels.”

The method of this class is knowing through doing and being, not simply by reading and spewing Foucault or some other difficult-to-spell theorist. Doing is the most effective way to know, and what academics call “theory” is not something you should smear onto a topic like paint to a wall. Theory lives “inside” whatever object you’re talking about.

“Sex, Drugs, and Comedy” is a so-called “seminar of engagement,” meaning that over the course of the term we’ll be literally engaged with those areas. We are going to comedy clubs. We will be involved in some way with drugs. And we are going to “sex events.”

Doesn’t that sound like fun! I have to say, though, that I’m excited and freaking-the-f-out about this “engagement” business, because I have no idea what’s going to happen.  Everything is completely unknown, unfamiliar, and that’s what makes it intoxicating.

A course like this is risqué  on so many levels, and probably looked down upon by the Oxford University Byzantine Society and/or the Mathematical Association of America. I can already hear the anti-humanists boiling on about courses like this being the death of intellectualism. But that’s why so many people love these kinds of courses. Students need engaging classes to keep them off their BlackBerrys and iPhones, so I don’t understand why universities don’t offer sexier course loads. Nobody wants to read Charlotte Brontë or whatever her name is anymore. People want to talk about J. Lo and feminism!

This isn’t to say that the classics and more standardized academic subjects should somehow totally fold into themselves—I’m convinced that the 19th century was the hottest spot in time, plagues and everything aside—but it means that for the humanities to stay relevant, it has to be connected to what people are interested in. College professors should figure out a way to squeeze Brontë (old) and Ke$ha (new) into the same course, because almost every college-aged person is interested in popular culture. Imaginative courses like “Sex, Drugs, and Comedy” attest to the freedom of the academy, and to a certain openness to new kinds of learning and untraditional subject matter.

But courses like that also change how we see the world. I’m already seeing comedy, a way of understanding culture, differently than I did before taking this class. Just this week I went to Caroline’s on Broadway, one of the best comedy clubs in America, and of the eight or so comics that went that night, almost everybody cracked a joke about ethnic or sexual stereotypes. One comedian (white) zeroed in on an Asian guy in the room and asked what his name was. So the Asian dude’s like, “Andrew.” And the funny guy goes, “Your name’s not Andrew. What’s your real, Asian, name?” The room roared with laughter, like seriously flipped out. But, really, what was so funny about that? Why do we laugh at racial stereotypes, gay jokes, and jokes about Jewish mothers?

I’ll tell you one thing: racial stereotypes aren’t so funny when they’re real and made outside a comedic context. It’s not funny when Mel Gibson or, most unfortunately this week, when the world’s greatest fashion designer and now ex-Christian Dior employee John Galliano says something anti-Semitic. We take both iterations of hatred very seriously. But what’s the difference between an anti-Semitic comment and a cheap racist joke meant to get a laugh out of you?

That night, if people weren’t making jokes about stereotypes, then they were busy doing sex jokes. I heard one comedian tell the ladies that if you’re gonna shave your vagina, you might as well just shave the whole ass, too. Don’t shave one and not the other. Again with the explosive laughter. But what are people laughing at? The truth? Insecurity?

One thing I really hope to understand through this “Sex, Drugs, and Comedy” course is the humor in sex, racism, and being fat. Are we only capable of laughing at sex and stereotypes?

I can’t wait until we go to the sex event. Wondering if that will be funny.