On the choicest Obama photograph of the 2012 U.S. presidential campaign, bar none. 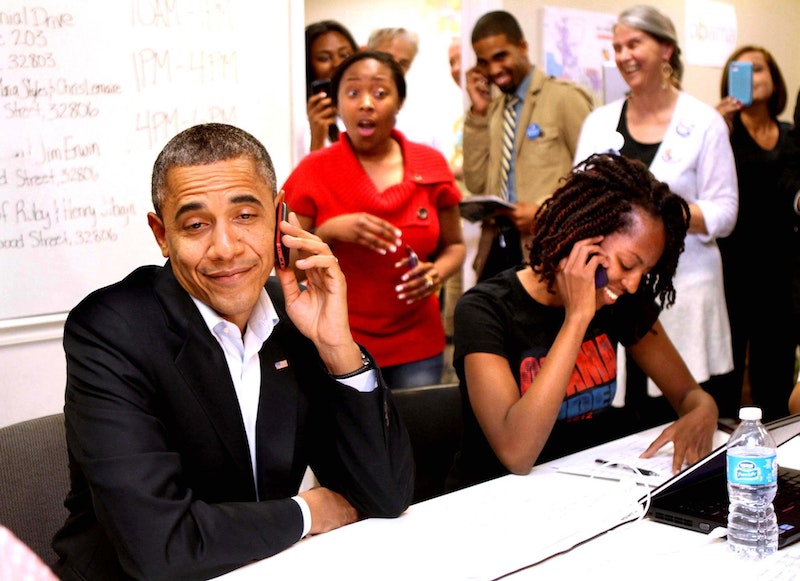 Really, it’s that smile. The smile is sedative, an instruction to relax. The smile says, “nah, it’s okay, I got this.” Wars are raging, a storm is bearing down on the East Coast, and a grueling election season is screeching to a halt, but if the Commander in Chief can fake his way through a cold call he wasn’t prepped for, the rest of us should be able to hang tight for a couple more days.

Confound the pigmentation, juggle the dimensions, and gender-switch a couple of the surrounding players, and the photograph above could’ve subbed for a Keith Giffen/J.M. DeMatteis-conceived Justice League International splash page from 1989: some classic Maxwell Lord stunting, you know?

I mean, sure, there are worry lines etched into that face, gray coloring the hair, and the President could probably benefit from a power nap or three, but élan in Joe Burbank’s Orlando Sentinel photograph is a joy to behold: the kind of knowingly amused cool you want your candidate projecting near the tail end of a purported tight re-election run. Clintonian, that’s what it was. You know? Damn.

For context: during an unannounced visit to an Orlando campaign field office, the president was handed a phone to talk to somebody—a sickly aunt, an undecided voter, who knows—but the wrong number was dialed by accident, necessitating that the President improvise on the spot, play it off legit.

And I refuse to investigate who he actually wound up jawing with because the potentiality is more fun that whatever actually happened—just as the Sentinel is entitled to its own story, I’m entitled to my own delusions—and the red-topped volunteer’s expression in the background is all oh-shit dismay, as though she’d inadvertently connected the prez with her Illuminati-obsessed step-uncle or the falafel-spot delivery guy or, you know, plugged him into customer-service Hades.

This is instructive, by the way: successful politicians are able to think on their feet, to adapt to shifting circumstances. Who wouldn’t trust Obama to wing this random call, which could’ve been to Fred Phelps or something, and not somehow walk away with a handful of endorsements and an invitation for dinner that evening? Mitt Romney would’ve blown it, you know? He’d talk over the person on the other end or hang up “by accident” or fake as though he was driving through a tunnel while obviously not driving through a tunnel, live on TV. Then he’d deny that he’d just done it.