The Rain It Raineth Every Day 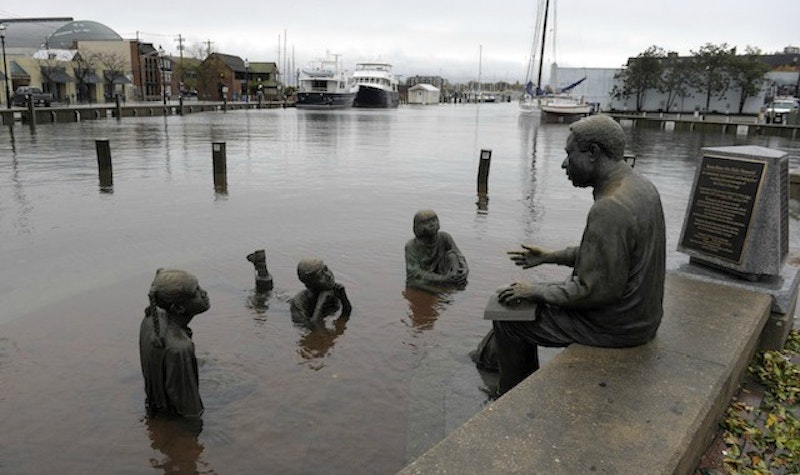 Early Monday afternoon, in the hours before Hurricane Sandy made landfall, my oldest brother and I sat in a bar in Hagerstown, MD, drinking beer and watching the sky darken. On the TV, some poor, poncho-clad weather woman was in Bethany Beach, saying something about dune erosion. "That's that dumb bitch who was out there this morning talking about the 25-30 ft. waves behind her," my brother said. "They had this one guy up in Connecticut or Rhode Island or something, he's all fuckin' wrapped up in this big rain jacket and this face mask and boots and shit, and then behind him come these two guys in shorts and flip flops. Fuckin' hilarious."

It'd been raining for more than a day at that point, and though it had turned gusty that morning there wasn't anything particularly Hurricane-y about the weather. Nor would there be, from our vantage in the Appalachians. Unlike the beach towns a couple of hours east, we had no significant flooding (the Potomac never even rose to flood stage in our county). And though the mountain roads were dusted with snow, it was nothing like the two-three ft. that some parts of Garrett County were left with.

Later that night, storm trucks driven in from Indiana and Ohio to help local electric crews had their copper wiring stolen. "That's what they got for their thanks," said Sherriff's Office Spokesman Lt. Tom Newton. A few miles away, 51-year-old Richard Deneen had the roof of his trailer ripped off. Talking to reporters later, Deneen was quoted as saying, "I heard this big roar, and all of a sudden the roof just lifted off the house… We thought maybe a tractor trailer might have hit the place."

All around the Internet I've been reading blog posts about how Hurricane Sandy was some kind of freak storm caused by climate change. StateImpact, Daily Kos, Grist and a huge number of other sites (some more legitimate than others) offered definitive answers. This morning CNN ran an op-ed titled, "Climate change is real." Over at The Washington Post, Brad Plummer explains, "Yes, Hurricane Sandy is a good reason to worry about climate change."

But at NPR, Adam Frank's post from Sunday, "Frankenstorm: Has Climate Change Created A Monster?," the post that started all of this talk, was a bit more nuanced: "There is a hierarchy of weather events which scientists feel they understand well enough for establishing climate change links. Global temperature rises and extreme heat rank high on that list, but Hurricanes rank low."

Part of the problem is a simple lack of data. Before global satellite tracking started in the 1970s there just wasn't a lot to go on. "For hurricanes," Frank writes, "…sticking to the science means it is still hard to point to an individual storm and say, yes! Climate change! A more reasoned approach is to take the full weight of our understanding about the Earth and its systems and go beyond asking if any particular event is due to global warming or natural variability." Which is not to downplay the threat of climate change, but merely to suggest that we're all better off when we don't give in to politicized hyperbole. As Tania Lombrozo put it, "...rhetorical oomph comes at the cost of an opportunity to educate people about how science works and why the products of science are our most reliable guides to the natural world."