Cosmo's "Man Manual" is the go-to spot for young women looking to demean themselves and their partners. 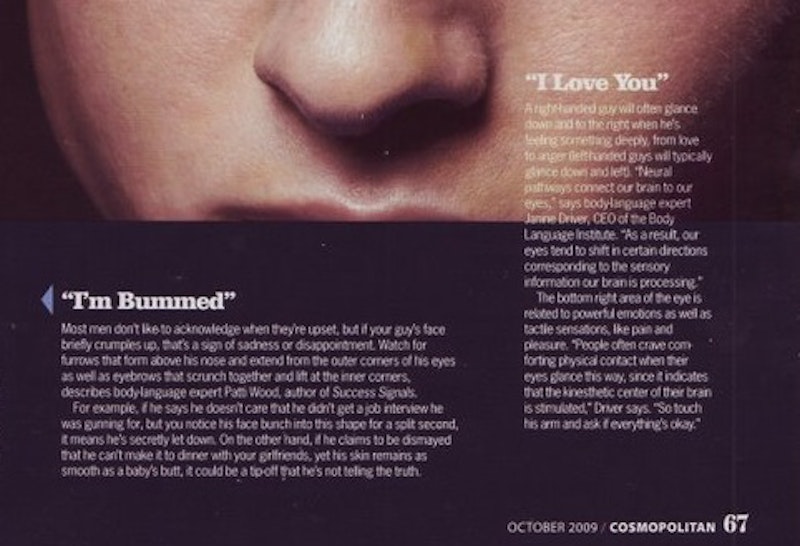 "Ugly guy truth: No matter how much we love you, we're only capable of listening to about 20 percent of what you say."

So says Matt Titus, a "relationship expert" quoted in the October issue of Cosmopolitan magazine. I usually don't read Cosmopolitan, but my new housemate has a tendency to leave her copies lying around in the bathroom. As it turns out, Cosmo makes for great toilet reading: after just one or two pages, I feel a great desire to flush the whole thing.

I've written a lot in the past about my objections to women's magazines, from the unrealistic images of beauty to be found between their covers to the schizophrenic approach they take to readers' bodies, which tends to go a little something like this: "Love your body! And lose ten pounds! You're perfect just the way you are! But these jeans will flatter your butt! You need to tone your abs! Gosh, why do still hate your body!?" Because I like to read things that don't make me hate myself, I have very little tolerance for women's magazines. In fact, I'm usually so disgusted by the fawning beauty copy and the emaciated-looking models that I rarely even make it to overpriced fashion section in the middle of the magazine.

This is perhaps for the best, because, as I discovered when I finally made it to the back of a Cosmo this week, it's at the back of the magazine that one finds the mother lode of outrageous, truly sexist crap. I'm talking about the relationships advice section or, as it's called in Cosmo, the Man Manual.

The aforementioned Mr. Titus, coauthor of a book called Why Hasn't He Called? (let me guess, it's because he's just not that into you?), is this month's guest columnist in the Man Manual section, the subject of which is "Why he calls you a nag, when you're not." Titus' theory is that men use this n-word because they know it makes women feel like they're turning into their mothers—or worse, into their mothers-in-law. Men know, Titus claims, that dropping the n-bomb will make a woman shut up immediately, so that her boyfriend can go back to watching the game in blissful, woman-free silence.

On the bright side, I guess you could call Titus' relationship advice a step towards gender equality, in that it insults both men and women. Let's take, for example, the assertion that men only listen—nay, are only capable of listening—to one-fifth of what women say. Quite apart from the difficulty one would have in proving such a hypothesis in any convincing scientific way, the sexism inherent in this idea, which is stated as bald, inevitable fact, is quite spectacular.

In this view of the world, men are easily distracted overgrown man-children who, deep down, think that their girlfriends are trying to boss them around just like their moms did, rather than form a collaborative partnership based on respect and affection. "In guys' minds," Titus writes, "we already did everything a woman (i.e. Mom) asked for 18 years... If we do everything our girlfriends and wives say, we will actually lose our manly status and turn into children again." Male readers should feel free to correct me, but if I were a man, I'd be rather insulted by this representation of my gender.

But I'm a woman, so I'm busy being insulted by the suggestion that men can only muster the attention span to listen to one-fifth of what I, and the rest of my gender, says. Sorry Susan Rice, I only listened to the first twelve minutes of your speech at the UN. Shucks, Indra Nooyi, I zoned out nine minutes in to your keynote address. Apologies, Sheryl WuDunn, I only read one-fifth of your half of Half the Sky, but I sure did enjoy all of what your husband wrote about women's rights.

The problem with this kind of dating advice is not whether it's correct or not, because, as I said, there's no way for Cosmo to prove that. Take it from someone who has tried even the most miserable-sounding, failure-doomed Cosmo recommended diet that truth plays very little part here.

The problem is that advice like this teaches women to expect to be ignored by the men they love eighty percent-eighty percent!-of the time. It normalizes the idea that women must accept having their thoughts and ideas ignored by the very men who are supposed to love and respect them, because that's just the way men naturally are. Sorry ladies, nothing we can do about it: we're just naturally disrespectful. And just like that, men are off the hook for forty-eight minutes out of every hour. The cost of being off the hook, of course, is that men everywhere have been insulted by one of their own.

Do we really want to teach women to settle for men who can watch a fifteen-minute football quarter, but can't handle twelve minutes of talking to their girlfriends? Surely we underestimate men when we depict them as inherently, inevitably, assholes. Women deserve better—and surely men can do better—than twenty percent of the time.