Modern people may never be more cruel than when they're out at a bar. 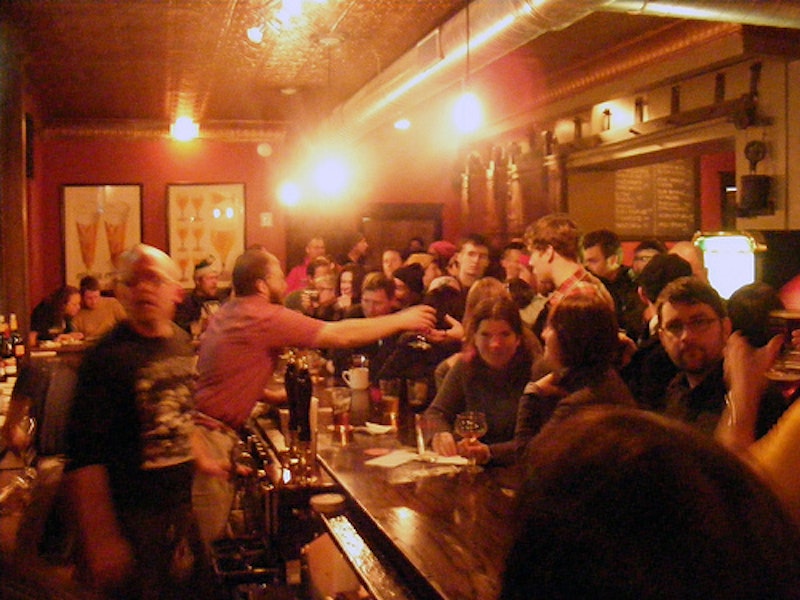 The girl walked into the bar wearing a shirt that had clearly been designed with a much smaller person in mind. In fact, I wondered if she had borrowed the shirt from a friend. A much smaller friend. Or, more likely, a "frenemy," since no "friend" would allow her to walk out of the front door in a shirt intended for a ‘tween. At this moment, in a crowded bar during happy hour, I was seeing more of this girl's skin than her dermatologist. And it was not "sexy."

I heard a girl sitting nearby suck in her breath and whisper (audibly to half of the bar), "What was she thinking? She poured herself into that shirt, and it's leaking out everywhere!" There were a few giggles, a couple of stunned gasps, and one snorted inhalation of a two-dollar draft beer by a girl who had very little room to comment on the sartorial tragedies of others. All of this was immediately followed by a moment of silence as every single girl in the room suddenly took stock of her own personal appearance and wondered if it laid invitation for commentary as well.

This is the double-edged sword of criticizing others: you are suddenly hyper-aware of your own corporeal presence in the transaction. If you are commenting on someone else's appearance, it's likely that someone out there is taking stock of you. Now, this isn't to say that there aren't head-turning victims of fashion and personal style out there. If a female is wearing something that is a blatant study of human anatomy, I feel that this invites a barb. But there's a certain awareness that needs to be had here.

A few weekends ago, I was out with a friend in a bar where there was copious drinking taking place. She leaned over and, whispering in my ear, said, "Look at that girl's hair!" I immediately began scoping the bar for some evidence of an unfortunate mop, perhaps a mullet or maybe a visit to the 1960s before there had been scientific advancements in color processing.

But she went on before I could witness the tragedy. "It's incredible!" she said. "It's curly and shiny and long and it's so beautiful! How does she even get it to look that way?" I followed her line of vision to see a Keri Russell-look-alike (pre-Felicity chop) with the most unbelievable mane of strawberry blonde curls standing in line for the bathroom and sipping a pint of beer.

My friend worked her way through the crowd, went right up to Curls and said, "Your hair is beautiful. I have always wanted hair like that, and I just wanted to tell you that it's just incredible." I watched as Curls' face shifted quickly from stunned, to modest, to a blushing amusement. She lit up. And, as my friend elbowed back through the crowd over to me, I watched as Curls looked around, at nothing in particular, as though someone had just told her that she was someone else's reason for living. My friend took a long sip of her beer and said, "Where were we? Oh yes, discussing the time you made one of your college ex-boyfriends cry in public."

I thought about that random compliment, and the delight it had surely passed on to someone else's life. And I thought about how callous and cutthroat girls can be to one another in light of our own insecurities. It's become so commonplace to bitterly hold people accountable for fashion choices. Which is why a random compliment is such a breath of fresh air. Anytime that you have an interaction with another human being is a moment rife with the potential to be called upon at a later point in time in the minds of both. If the interaction is a negative one, the devastation can be long-lasting. But if the interaction is one of those "random acts of kindness" that people preach on bumper stickers, well; it can be a pretty latent moment.

A few nights ago I was at dinner with my roommate and we noticed a pair of gorgeous red shoes worn by a girl there. I watched, with a practiced eye, as they scoped every person who walked through the door. I saw the three heads come together in conspiratorial whispers over a bottle of Spanish white, and I knew that whatever commentary was taking place could only be described as "harsh."

After we paid our bill, as we were leaving the restaurant, I stopped by the girl with the shoes. All three heads swiveled in my direction as I leaned over to join their little camp, and whispered, "Those shoes are fabulous!" while pointing at the truly stunning red leather stilettos.

The girl paused, and I saw that flicker of astonishment. She quickly regained composure and thanked me, politely, but as I turned to go I noted that she was smiling in a way she hadn't been before. A random compliment had been paid in an environment that seems only to encourage whispered criticism masquerading as humor, and I hoped that she would pay it forward.