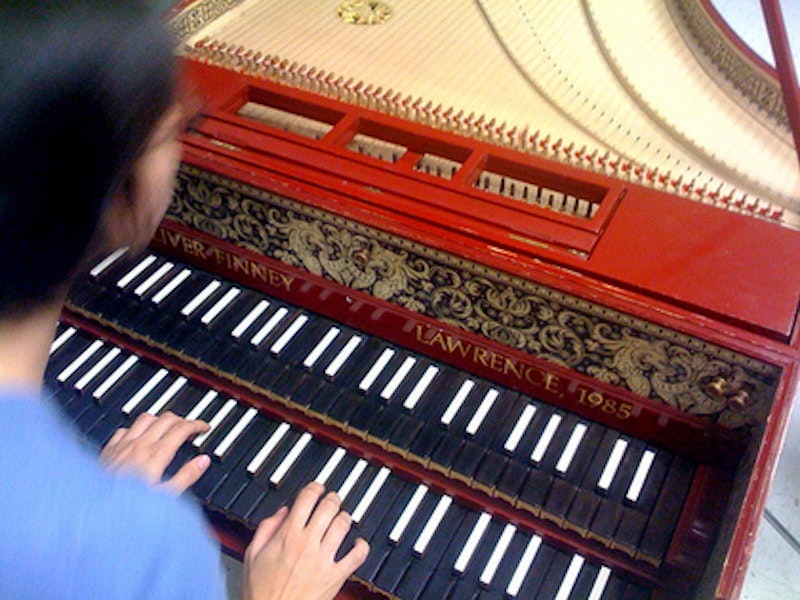 Harpsichords are in! Photo by nathanborror.

Who has his finger more firmly on the pulse of hot fashion and lifestyle trends than an Internet writer living in New Jersey? No one, that’s who. Here’s a list of trends that I predict for 2009, or in some cases trends that I really hope happen in 2009 but obviously won’t.

Touring Bicycles
Everyone is sick to death of fixed-gear bikes. Yes, bike messengers ride them, and they’re cool and have great hair and wear their belts sideways and listen to interesting music, but let’s face it—the whole scene is over. The new big thing is FULLY LOADED TOURING BIKES. Trust me. Come January, you will see many a hipster clad in tight wool pants cruising down 5th Ave. with bulging panniers all over his bike, carrying a cooking stove and four person tent as well as a few dozen un-translated Japanese music magazines.

Harpsichord Music
This is coming back in a major way—or should I say coming BACH? No, back. I saw T-Pain, or someone who looks exactly like T-Pain, buying a three-choir Italian cedar harpsichord in Mahwah, NJ last week. The viola da gamba, on the other hand, can rot in hell.

Clear Plastic Snow Shovels
Shoveling the driveway? BORING. Using a snowblower? Please. But if you have a gnarly clear plastic shovel, you’ll not only be getting great exercise, you’ll be able to see the bottom part of the snow, the part that once languished in invisible obscurity. I guarantee you that these things will be huge.

Kohlrabi
The German-engineered cabbage-turnip that’s fun to eat, looks like it was designed by H.R. Giger and is good for you! What more can I say? Young kohlrabi can be eaten raw, although I would recommend that you become a Satanist before trying this (i.e. you need to be wearing shitloads of Clive Barker-style rings and reclining on a velvet chaise lounge).

Stomping on Tubes of Toothpaste
“Honey, let’s skip going to Hot Night Club and stomp some toothpaste in the driveway!”

Netsuke, the exquisite tobacco-case charms of feudal Japan
Developed to hold tobacco cases to the robes of Japanese nobles during the Edo period, netsuke are fantastically detailed tiny sculptures attached to ancient Japanese cords. They are basically like the nylon straps that come with the nerdier sort of cellphone, but for medieval Japanese fanny-packs. We need these, because America is dangerously low on cell phone accessories.

Bruno Latour
This French philosopher and historian of science has long been popular in academic circles but it’s his fragrance that will win him trendsetter status in 2009. Pasteur One, Latour’s $95-a-bottle cologne, combines the odors of a working French cattle farm with inert anthrax bacilli and a hint of sandalwood.

Steampunk
Internet gadfly and unself-conscious dork Cory Doctorow is right: nothing is really cool unless it has shitloads of brass dials stuck all over it.

Nashua, NH
Manchester’s sleepy cousin will be THE destination in the coming year. Boasting tons of restaurants (six), several of them good, Nashua has it all: a non-discount shoe store, a real estate agent, some parking, and an L.L. Bean factory outlet. Look out especially for the coffee shop owned by a weird, overly friendly Romanian guy, across the street from the Dunkin’ Donuts and the police booth that is for some reason mounted on railroad tracks.

Autoerotic Asphyxiation
This is no longer that daring but it needs to make a comeback, especially because it can lead to hilariously awkward funeral announcements in the newspaper: “He died doing what he loved: choking himself with a silk scarf and watching Big Butts 9.”

Tiny Head
I think it’s about time that the tiny, snappy head from Alien stops being a piece of movie magic and starts being a legitimate fashion option. You know, the one that comes out of the big alien’s mouth? That one.

Freecycling
Freecycling is pulling stuff out of the garbage or something like that, but in my mind it really should be recycling, but with a kind of Jesus Christ Superstar vibe, like everyone goes out into the desert and just recycles things in a frenzy of singing and dancing.

Scene Hair
I can’t get enough of it. I think it’s time for scene hair to migrate towards older and stodgier people. Until we see doctors and history professors with long, dead flat black hair swooped over one of their eyes I know that I won’t be truly happy.

Broth
Nobody gets excited over broth. What is wrong with you people?

Horrible Showtime shows
I always get my wish when it comes to horrible, poorly written shows on Showtime, so this is just a formality. Maybe a Tudors/Weeds crossover in which Mary Louise Parker has to dance erotically for Henry VIII?