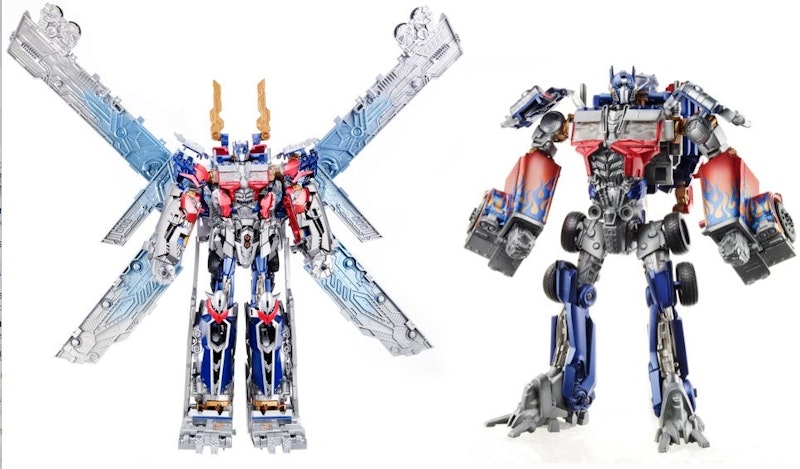 Rubik’s cubes never held any allure for me during childhood; they were puzzles I had no interest in solving, which is probably part of why I don’t presently command an enviable salary and am not fondling the keys to a summer home as I type this. Parenthood has been different, because in re-introducing Transformers into the public consciousness as a means of promoting a series of expensive, visually exploitive motion pictures, Hasbro has opted to make the process of turning an object into a robot and back extremely fucking complicated. (Two words: Tuner Mudflap.)

Time was—I’m talking the mid-1980s, when I was a boy—the uninitiated could sort out how to transform Starscream or Optimus Prime or Bumblebee in 30 seconds flat. No longer: it’s possible to lose 15 minutes or more figuring out how Cliffjumper’s arms fold together to form the front of a what looks like a sporty smart car. So playing with Transformer toys with my son becomes an exercise in frustration and futility because, well, it’s impossible to sustain any degree of imagination-powered storylines when they’re interrupted by furrowed-brow, gritted teeth attempts to convert the things, and then by the time you’ve managed to actually do it, with or without directions—directions which are mostly meaningless because the complexity level of these contraptions is MENSA-level insane—the thrill is gone, and you’ve forgotten whatever it was that the Decepticons were about to do to the Autobots, or vice-versa, the relative coolness of possession or design drained away.

And ironically enough, we’ve had more fun playing Transformers without actual Transformers in hand—using Trios constructions or Matchbox cars as stand-ins instead, cooking up concussive mouthed sound-effects, the living room giving way to Oregonian wastelands and secret headquarters and high-tech O.K. Corrals, the power of imagination ruling the day and simplifying the experience enough to turn it into a special, shared memory.