Toy Fair: A Gallery of Delusion and Sadness 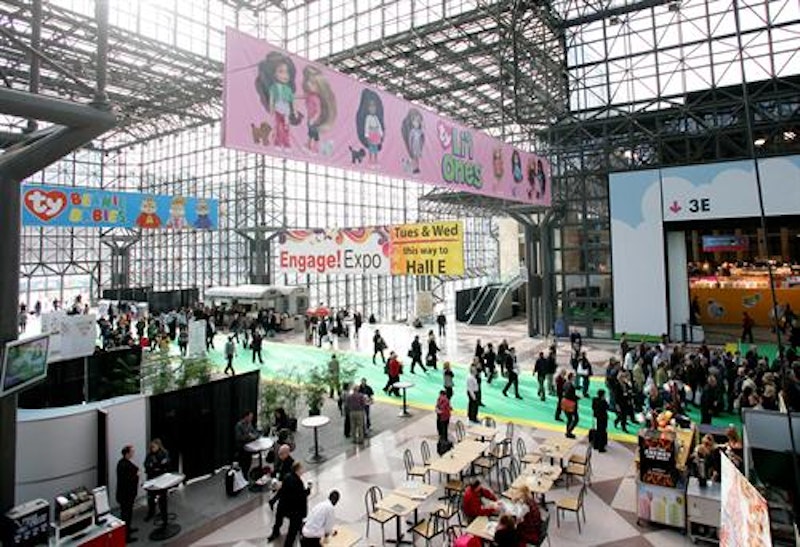 The International Toy Fair, held in NYC’s vast Javits Center every February, is an experience which is closed off to everyone but toy manufacturers, toy distributors, and a few people who write about toy manufacturers and distributors. Bombastic and excited booth people try to sell you on the merits of whatever weird thing it is that they’re trying to sell, and behind them, people in suits confer very seriously and quietly about the future of the known universe. Some companies treat the press like kings and shower them with gifts and promotional materials, and others will spit at you and shoo you away from their top secret wares as if you were just chewing on their collective sofas, fearful that a single photograph of their items finding its way to the Internet will destroy them. It’s a weird hot-and-cold dynamic that’s always disconcerting to stumble through.

I’ve been to Toy Fair more times than I care to admit—first as a nerd excitedly in search of action figures, then as a reporter interested in new collectibles, and eventually, as a disinterested guy with a camera, a deadline, and shoes that were invariably full of snow. About seven years ago when I started attending the event, Toy Fair featured alleys of toy creators and new ideas in a central area that they called “Inventor’s Alley.” This entire section was replete with bright-eyed visionaries trying to make one of their inspirations explode into the treacherous and potentially profitable world of toys. As the years progressed, Inventor’s Alley slowly shrunk, and eventually slithered away into a dark, uncarpeted corner of the Javits Center. This is where dreams go to die, behind the epic Lego booth and Sideshow Toys’ life-sized busts of Darth Vader. Somewhere to the left of the hot dog cart.

The years have not been kind to many of these toy inventors, and their stories are alternately hilarious and tragic. Youthful enthusiasm and wonder is rarely successfully paired with a mature perspective on what makes things successful. Otherwise, we’d have far more Pee-Wee Hermans. Conjecture about what might appeal to a youthful audience is usually pretty laughable also.

There was “Kick Golf,” a booth at which someone had set up nothing but a lone golf ball and a plastic drinking cup, and scrawled “Kick Gulf” onto a piece of poster board with a Sharpie, misspelling his own product’s name. Nothing was branded, or even legible, but someone thought that this was a good enough idea to buy an expensive space at Toy Fair and some very cheap beer cups. This is the “lazy inventor” approach, hoping to capitalize on those unrealistic stories in which a singular idea explodes into a fortune.

There was a large, plastic bottle in the shape of a baby, for collecting sand at the beach, making the most unwieldy and disturbing doll possible. It was also good to store beach-related keepsakes, apparently. The act of storing things inside of a baby has some fundamental problems that were not properly addressed. Many of these toys are the physical equivalent of blurting out something really embarrassing, but without the necessary social skills to be aware that one should be embarrassed about them.

One of the most tragic stories is about Bulletball, an ill-conceived tabletop game of ping pong which is played with the forearm. In order to make this dream a reality, the inventor poured almost three decades of his own life into its completion, as well as his house and his wife’s wedding ring. At least we got an amazing rap song out of Bulletball, though, thanks to the website’s order page.

Many creators appear at Toy Fair with the hope that their strange character designs will catch fire and they’ll be paid for licensing rights. The cycloptic Eye-Man never survived the winter, but Thumbs-Up Johnnie thrives even today, as a thumbprint with a face drawn on it. After writing a critical review of Johnnie and asking if “Thumbs-Up Johnnie” was his name or instructions regarding where to insert one’s thumbs into the titular character, his creator actually sent a care package, complete with a cookie and a book. I can’t hold a grudge.

Po-knee. When giving your kid a horsey ride on your knee requires accessories. Like a pony head that you strap onto your leg. There were at least two inventors who came up with this idea during the same year, and they had booths just down the aisle from one another. I’ve gotta tell you that Toy Fair was like a powder keg that year. Only Po-knee survived, and can still be purchased today.

An intensely Slovak guy shouted about his gang-centric board game at me, proudly describing the merits of being a pimp, using hoes as currency, and using the word “bling” more times than any self-respecting adult should. The game was summarized with the catch phrase, “Don’t hate me, hate the game.” Can’t I do both?

Most of these are the ideas that never make it past their first real trial among people who aren’t supportive friends and immediate family. There’s a very specific kind of Internet ghost town which reveals the fading foundations of bad ideas, lost hopes and investments gone wrong, but it’s sobering to see these inevitable train wrecks, and the people responsible for them, just prior to their collision with the forces of reality, and it leaves you with one pervasive thought: great ideas and delusions are often indistinguishable to their bearers.