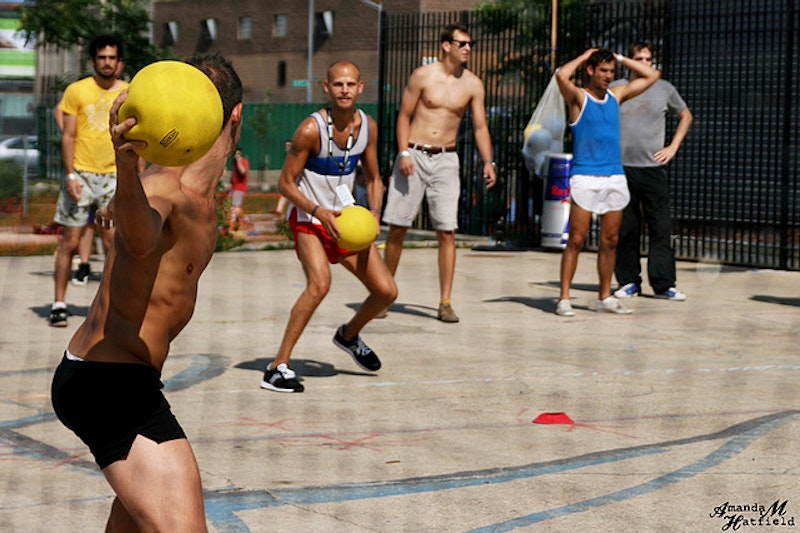 Only in New York can you live in a neighborhood where virtually nobody speaks English, where you go to the all-in-one laundromat/quick mart/fax place and the Polish dude running the joint acts like he’s never seen, touched, or encountered a fax machine in his life. This process unnecessarily slows your day down by 20 percent, so you’re like “fuck!” And only in New York can you go to the very fancy all-organic grocery on your block, which carries every vegetable, every fruit, 12 different kinds of organic honey, Polish delicacies straight from the Mother Land, and all you need is dishwashing liquid. But this place doesn’t sell dishwashing liquid. Surprise! It’s not that they’re out—they just don’t sell it. Period. What, are my dishes so organic they poof away into a biodegradable dust at the end of the meal?

New York is a fabulous place to live, one of the best to my mind. But that doesn’t mean living here comes without its annoying little frustrations. So as we approach the New Year or, you know, just in case you needed a reminder about why you pay $2,000 for a small ass studio apartment in a “hip” neighborhood and risk having your face shoved into a stranger’s armpit on an unbelievably crowded L train at nine a.m. on a weekday, here are 25 reasons to keep on loving New York City. Hey, New York: sometimes you’re a hot fucking mess, but damn it I just can’t quit you.

25) Because nobody is from here, not even you. Ever been on the subway during a holiday weekend? It’s empty because everybody’s back in Boise, Idaho or wherever they’re really from. You know you’re a real New Yorker when you get on a busy subway and some bitch looks at you crazy for making even less room and you look at her and say, “Hey, lady. It’s a crowded train. If you don’t like it, move to Minnesota.”

23) Because Lady Gaga. Where else could she come from?

22) Because we don’t have a Wal-Mart, though we do have seven ginormous Whole Foods. And the line is always ridiculous and complicated.

20) Because the L train is itself a performance piece.

19) Because the annoying “What the fuck” moments, like when you’re forced to have small talk with somebody you’ve been avoiding; you ran into them in Clinton Hill—a neighborhood you never go to. Or like when there’s only one cashier at Duane Reade but 20 people waiting on the line. What the fuck?

18) Because we will tell tourists who stand with their maps at the bottom of the stairwell to get the fuck out of the way but if they ask us how to get to Lincoln Center, we will give them the best directions and walk them halfway there. It’s in the direction we’re headed, anyhow.

17) Because no pants day. Or wait—is that just the crazy lady who never wears them?

16) Because everybody is eye candy, even if they’re not actually that cute.

15) Because maybe you’ve never even been to the Upper East Side or wherever. But when you do go to a different neighborhood, it feels like you’re in a totally new place.

14) Because the guy at my magazine shop knows I come in once a month for Vogue Paris and Vogue Italy, and he’ll even tell me what he thinks about the covers.

13) Because I saw Gwyneth Paltrow walking through the West Village but I was too busy sending a text message that I didn’t flinch.

12) Because the best part about traveling to other places is that euphoric sense of excitement you get when you step back out of the taxi for the first time when you return. I spent three weeks in L.A. in September, and there was nothing like that $20 cab ride from Penn Station over the Williamsburg Bridge and down Bedford Ave.

11) Because we avoid Times Square, but people come here from all over the world just to see it once...though the new Times Square Forever 21 is kind of the bomb (it’s 90,000 square feet and has 100 dressing rooms!).

10) Because culture. Only in New York is a conference on either Slavoj Zizek, Hilary Hahn, Roland Barthes, or Judith Butler completely sold out.

9) Because you can get anything and anyone from Craigslist.

8) Because the Mitzvah Tank!

7) Because walking 30 blocks is nothing, but waiting eight minutes on a subway is annoying as FUCK.

6) Because everybody stares down into the subway tunnel and gets annoyed when a) it’s not coming, b) a train comes but it’s the trash train, or c) it comes but doesn’t stop. We bond over stupid shit like this.

5) Because every morning when I go to Peter Pan bakery, they know I always get one Sugar Jelly and one Honey Dip, no matter who’s taking my order.

4) Because no matter what’s going on in your personal life, you can always have an intern do your dirty work. I mean, really: interns are what keeps the city running.

3) Because no matter who you are, how fabulous you are, or how rich and important you think you are, don’t worry: there’s somebody else even more fabulous and even richer, e.g. Olivia Palermo.

1) Because we wait in line for ridiculous things. If there’s a line, you know you’re either at the new “it” restaurant, a Whole Foods, or an Alexander Wang sample sale. Have you ever seen the line at Shake Shack? Ridiculous.

0) Because the ads for Manhattan Mini Storage have nothing to do with storage, and everything to do with wit. Store your valuables with us “Until It’s Safe To Have A Tea Party Again”; or, “Your Closet’s So Narrow It Makes Paris Look Deep.”