Captain Mar-Vell is a rarity in the super hero world because he's a character who has stayed dead ever since he was killed off. 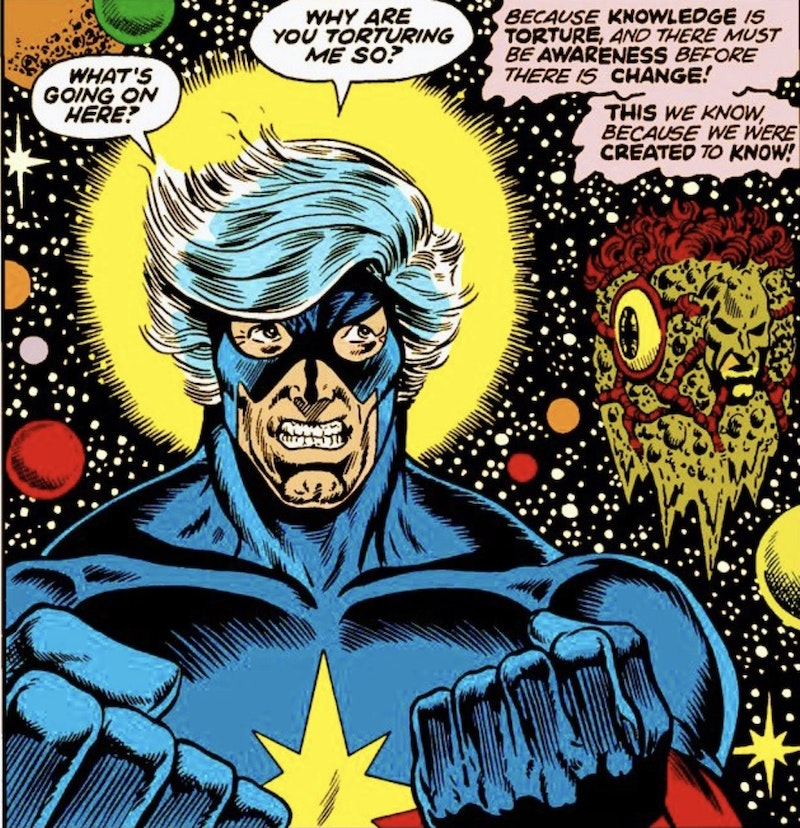 Captain Mar-Vell (aka Captain Marvel) was an alien super-soldier from the planet Kree. His story encompassed elements of Marvel Comics’ Thor series, political thrillers in the vein of The Fugitive andThe Prisoner, and traditional space operas. He was created by Marvel stalwarts Stan Lee and Gene Colan, but many different writer/artist teams worked on the character throughout his existence. The captain’s adventures ran in the Marvel Super Heroes anthology until he got his own series in early-1968.

Jim Starlin took the creative reins for 10 issues beginning with Captain Marvel 25 (March 1973). Until Starlin came along the Kree hero’s exploits were little more than overblown fight scenes punctuated by predictable melodrama. Mar-Vell was an unfinished sketch with a few unique sci-fi elements that made his adventures barely better than average. This sliver of a character became the perfect blank canvas for Starlin’s wild conceptual action painting—Mar-Vell’s chaotic ascension from non-entity to galactic savior. Despite being preceded by a mess of narrative dead ends, Starlin’s imaginative re-interpretation of Mar-Vell went into overdrive from day one. Under his guidance this clunky title became an important part of the Marvel Universe and the epitome of tripped-out 1970s aesthetics.

Starlin’s first big addition involved the disgraced titan Thanos. As a gesture of love for the beautiful immortal Mistress Death, Thanos attempts to destroy the universe by “blacking out the stars.” In an almost completely random plot twist, Mar-Vell is then confronted by an interdimensional composite entity called Eon who uses supernatural education and psychic powers to turn the super soldier into the only being who can stop Thanos.

Initially the Kree hero had no moral problem with traditional concepts of war or violence. The idea of physical force as a necessity has been drilled into the minds of soldiers and warriors ever since the dawn of recorded history. The same can be said for all Kree soldiers. Eon reveals that battle is only effective when tempered by cosmic awareness, a solipsistic balance rooted in the preservation of emotional relationships and abstinence from destruction. Eon’s mystical/free-form college of cosmic awareness becomes central in Captain Marvel 29. Its prosaic words radically re-shape heroic purpose into something unencumbered by the polarized dynamics of good and evil, work and rest, enlightenment and confusion:

“…Knowledge is torture and there must be awareness before there is change! …You have lived and accepted the ways of the warrior! The universe now needs not a warrior but a protector! He who seeks to protect must first love…”

Captain Mar-Vell is a rarity in the super hero world because he’s a character who died and has stayed dead ever since he was killed off. His fate was the subject of Jim Starlin’s pioneering graphic novel The Death Of Captain Marvel (1982). Years before The Death… Mar-Vell fought a super villain called Nitro The Exploding Man (a melee immortalized in Captain Marvel 34, the final Starlin issue). He emerged triumphant, but in the process was blasted with the Compound 13 nerve gas; its after effects eventually afflicted him with terminal cancer. The encounter with Nitro occurred soon after Eon’s revelatory cameo and battles with Thanos, all things which transpired from Captain Marvel 25 to 33. Reading those issues it becomes clear that, despite Eon’s influential wisdom, Mar-Vell never gained a firm grasp on cosmic awareness.

He saves the universe by killing and destroying Thanos’ hordes using all manner of combat techniques (cosmically informed and otherwise). The cosmic awareness plays only one major part in guiding the super soldier to victory. It reinforces the protective/paternal instincts that keep him hot on Thanos’ trail. Eon’s radical anti-polarization and Death’s appearance as a love interest were both revolutionary genre-busting concepts, but the big face-off between Thanos and Mar-Vell (a career defining moment for both characters) ends with little more than a classic showdown. At its core, it wasn’t radically different than many other climactic comic battles.

Unlike Adam Warlock’s suicide, Mar-Vell’s cancer death was preventable and painful. WhileThe Death Of Captain Marvel never makes direct references to retribution, Mar-Vell’s suffering was the quasi-karmic result of his inability to take full advantage of cosmic awareness’ non-violent benefits. Eon extolled the virtues of a balance that Mar-Vell couldn’t maintain forever. This limitation (the lingering dominance of aggression and offensive strategy) led the Kree hero straight into Nitro’s carcinogenic blast. Violent routines scarred Mar-Vell’s consciousness. “The ways of the warrior” tainted the cosmic awareness even as it created a legendary protector of peace.