The Problem With Gentrification

Spike Lee says it best: "We been here!" 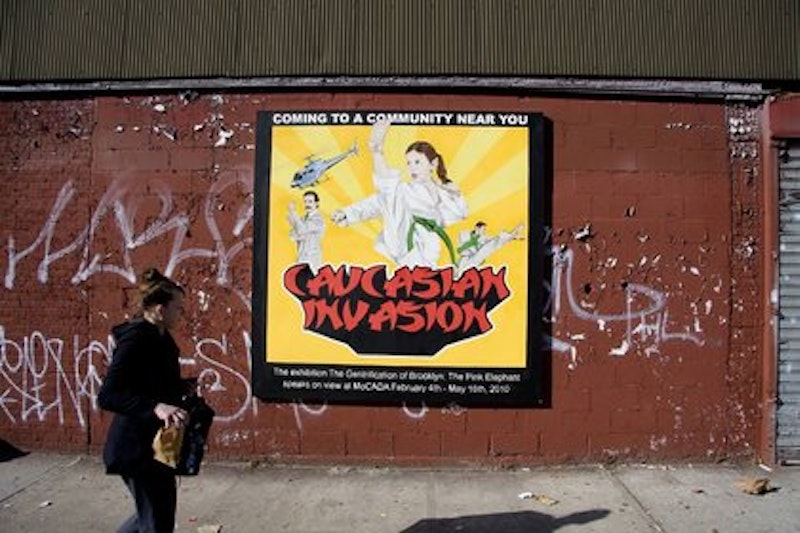 My favorite Brooklyn café is a little queer-friendly place in an area real estate agents call Clinton Hill but which is technically still Bed Stuy. Situated right on Franklin St., about a five-minute walk from the Franklin A/C subway, Outpost is a super hipster café that marked one of the earliest signs of the gentrification of the neighborhood. Since 2006, I’ve been to Outpost hundreds of times. I wrote much of my dissertation and a lot of my graduate school course work there. When you’re doing a huge creative project you go to coffee shops to be around other people who are also working on stuff so you don’t get lonely or slit your wrists.

One day in the summer of 2011 I was walking back to the subway and I noticed something striking about the neighborhood. It wasn’t all the ugly, poorly-designed condos that were springing up, though those architects ought to be ashamed of themselves. And it wasn’t the bougie wine bars, either. It was that on my walk back to the G train at Classon I didn’t pass a single black person. Not long ago people knew you didn’t walk around at night around the Bedford Nostrand G train, which was not so far away. At the time, police stood on the corners at night, ready to pounce on troublemakers (read: black men). But now? There are more white people getting out at Bedford Nostrand than ever before, and more power to them for dealing with the G train’s frequent weekend ridiculousness.

This is when I knew Brooklyn was gentrifying. It’s not that the signs weren’t there before—the trains packed full of white people getting out in predominantly black neighborhoods, the organic food stores, the coffee shops, the vegan joints. But the symbolism of walking to the subway for 10 minutes in a historically black neighborhood without passing a single black person on the way really brought home not only that Brooklyn was gentrifying, but that it was doing so at an alarming pace.

Gentrification is a reasonably normal process of urban development. The problem with gentrification is not the improvements it makes to neighborhoods. No one will argue against the better services, more frequent trains, fabulous bars, better public schools and cool shops. And I’m not sure anyone will bitch about the real estate prices, if, that is, you can afford to be a homeowner.

The problem with gentrification is that in every single instance, from San Francisco and Chicago to New York and East London, it always takes an influx of white people in poorer neighborhoods of color before things get better. This is a fact. So no matter what your thoughts are on the issue, ask yourself why it takes the process of gentrification and the white people who come with it for poorer areas to see any substantial improvement.

“We been here!” an animated Spike Lee said in a brilliant anti-gentrification rant delivered at Pratt this week. “Why did it take this great influx of white people to get the schools better? Why’s there more police protection in Bed Stuy and Harlem now? Why’s the garbage getting picked up more regularly? We been here!”

The genius of Lee’s rant is in how he called out white hipsters for ruining Brooklyn, particularly those trustifarian assholes who could easily afford to live in an area of the city that’s more in line with their (parents') pocketbooks. The story of gentrification is how marginalized people who are embedded in neighborhoods get priced out of areas they have lived in for decades for increasingly white-collar workers and cultural interests.

But gentrifiers are a whiny bunch, too. A few months ago when the new Rough Trade store opened in Williamsburg the venue was scheduled to hold a highly anticipated show in support of Childish Gambino’s new record Because the Internet. The concert was shut down because of noise complaints from the luxury apartment building next door, in Williamsburg, a neighborhood known for a festive nightlife and music scene.

Listen up, bros and mommies: you don’t get to move to areas that are “cool” and “happening” and then complain about the stuff that made them desirable in the first place.

The “We been here!” trope isn’t the only failing of gentrification, though. Things get even more complicated if you are anyone who lives in New York who doesn’t make six figures. Maybe you make less than $50,000 per year, or less than $22,000 per year. Here comes the hard part: unless you come from money, you can’t afford to live in any central area of any city that’s going through a process of gentrification. Chelsea is out of the question, so is the Upper West Side, Gramercy, and the 16eme. So guess what? You are forced to move to Bed Stuy, you’re forced to move to Crown Heights, you’re forced to move to Dalston or Peckham or Pilsen.

If you move to Shoreditch or Williamsburg or Lakeview, you’re not gentrifying because those areas are already there. People have already been priced out. Today it’s more expensive to live in certain areas of Brooklyn than it is to live in Manhattan. For context, folks who fled to Williamsburg because the Lower East Side and the East Village were too expensive can now afford to move back to Manhattan. Can you imagine? That’s how expensive the city has become.

Down in Richmond, Virginia I pay relatively little for a renovated loft apartment with concrete floors and all utilities included in an area that is still up-and-coming. Sure, I could probably afford to live in the leafy suburbs, but I’d be so bored out there and, anyway, the one great thing about gentrification is that those are often really exciting. I just wish planners, developers, real estate people and everyone else could figure out how to keep the interesting blend of local and newcomers without turning every goddamn place into an outdoor shopping mall.