The Niche Appeal of Chelsea Handler

Women comics in America get no respect, no respect at all. 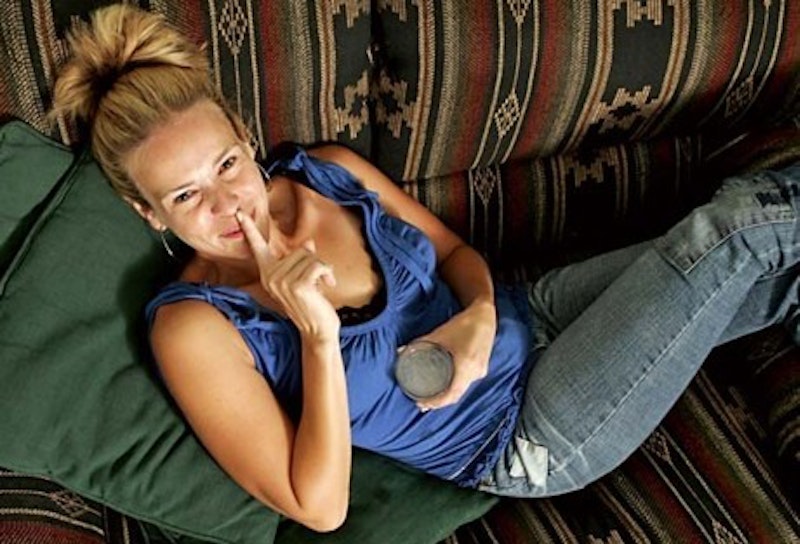 Chelsea Handler is at the top of my list of favorite comics, beating out a very gay-friendly Margaret Cho by a landslide. My boyfriend first introduced her to me a couple of years ago and I scoffed at her irreverence. But the more I watched, the faster I realized: Oh! That’s exactly the point. Now I think Chelsea completely blows all the other (mostly male) comics out of the water.
So the first thing I did when visiting L.A. a few weeks ago was get tickets to see a live taping of her hit show Chelsea Lately.

Well, that was an experience! I’d never been to a live taping before, so it was really fun to see the cameras and all the work that goes into making TV great. The whole production lasted about three hours, but most of that time was spent waiting/getting strip-searched by the Comcast security dudes who, by the way, were not letting me in the studio with my really fabulous man bag, even though the bitch in front of me had the same one. I kept saying to myself, if they don’t let me in because of my bag, I’m gonna start some shit.   The most surprising part of the show experience was how fast it went. I guess I thought it would take a lot longer to film—you know, with mess-ups, flubs, and do-overs. But Chelsea didn’t make any mistakes. She was in and out. Bam.

And there was something about being right there in the audience that made the jokes seem much funnier: you could feel the warmth of everybody’s laughter, the anticipation for the next punchline. At one moment during her interview with B.o.B, Chelsea talks about her love for T.I. (she has a thing for black dudes) and she’s like, “I love T.I.” and so B.o.B stands up and goes, “He wanted me to give you this” (a hug) and then Chelsea’s like, “Oh, did you want me to turn around?” before she stands up. As in: do me doggy-style with your BBC! And that’s when I screamed: no she didn’t! But yes she did, and the whole audience passed out laughing.

High off my experience at Chelsea Lately, I looked forward to seeing her performance on MTV as the second woman to ever host the VMAs that Sunday, which I basically only watched to see Chelsea and Lady Gaga. But to tell you the truth, I was a little let down and didn’t think she was all that funny. Maybe she cracked under the pressure? Apparently, I wasn’t the only person who didn’t think she was funny. A Facebook friend of mine posted an old school video of Chris Rock hosting the VMAs back in 2003 with the headline, “In case you didn’t realize how bad Chelsea really was.” Dayum, Gina!

Here’s the thing: Chelsea follows a long line of comics whose brand of comedy just doesn’t translate to a mass audience. Some people don’t like asparagus no matter what you do to it. The host of the VMAs needs to be a little bit like McDonald’s—fast, easy, and something everybody likes. And if there’s anything MTV does well, it’s populism. So, maybe Chelsea wasn’t the best match for MTV’s audience in the first place. First of all, Chelsea attracts a certain kind of person—mostly the gays, the liberals, the New York-New Jerseys , those who can’t wait to see what bitchy thing Gawker will say next. Basically, everybody who loves sarcastic, intellectual humor. Chelsea isn’t as Laugh Out Loud funny as somebody like Mo’Nique or Conan (who to me is not very funny) unless you’re used to her.

We saw the same thing with Wanda Sykes, too, who basically ripped off Chelsea’s format on short-lived Wanda Sykes Show with a roundtable, a celebrity interview, and a drag queen as a sidekick instead of a midget. But Wanda’s ass eventually got cancelled, which is a shame. But even there, her brand of sarcasm ultimately didn’t translate from HBO to Fox.

Am I the only one who thinks it’s a bit sexist that the two funniest women comics around get bad reviews? Dude comics seem to easily flip between television and hosting. Wonder why that is? Wonder if America prefers their chicks in swimsuits rather than at the microphone. Feel like America’s a place where if you’re a dude running around barefoot in a field of hot shit wearing just a diaper, then you’re being funny and you’re probably already on TV, but that’s totally not a show I would ever put my eyes on and yet it’s likely the highest rated thing on the air.