As Seen on TV: Human Ignorance

The not-so-mysterious case of the Fushigi. 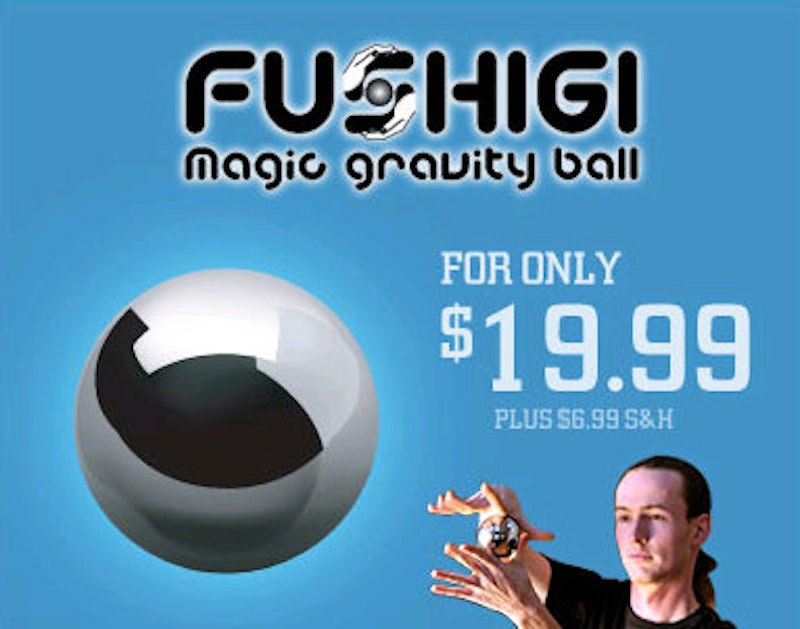 The word “fushigi” means “mystery” in Japanese, but it might as well mean “go fuck yourself.”

Somewhere in the depths of this summer’s Adult Swim-filled evenings, ads for the Fushigi started appearing on TV in my area. The Fushigi purports to be a magical sphere which effortlessly floats from hand to hand, defying gravity and logic, demonstrating an otherworldly grace, and inevitably getting you very laid. Anyone with a couple of firing neurons and a familiarity with any part of reality can quickly deduce that an acrylic ball cannot truly possess any magical abilities, especially since unicorn horns are in such short supply these days and leprechauns are notoriously expensive to rent.

While plenty of the Internet’s intelligentsia lament the fact that communicating with the Fushigi company directly is tantamount to signing up for telephonic torture-by-telemarketers, and that Fushigi falsifies shipping records without actually sending you your precious balls, and even that they’ll likely bill you twice for the same purchase, a stunning portion of these “reviews” are genuinely angry that the Fushigi is not genuinely, honest-to-Gandalf magical. Lord of the Rings was a documentary, right? Saruman scored his wicked awesome Palantir from the TV box, yeah?

“Ha..ha..ha I thought I’d buy the Fushigi ball for my son cause it looked cool. Dang TV gets ya every time. Its just a plastic Ball it does not float you can’t do what the DVD dude tells ya to do with it. DON’T BUY IT!”— withoutlube

“First I thought Fushigi was magic. But then when I saw a movie then I saw that it broke. I saw that it was just a marble and was a dumb plastic ball. Fushigi just wants your money and they just want you to buy it so that they will be rich.”—Polly

“to all of you that are saying that their Fushigi Ball is getting stuck to the ceiling, STOP THROWING IT. It is a solid ball so if you put holes in your ceiling with it then it may not come down.”—Josh Klug [noted opponent of Internet sarcasm]

Maybe it’s not ignorance as much as it is an intense human desire to believe in something, like the idea that x-ray specs once found in the back of comic books could actually reveal a bounty of boobage hidden beneath the lightly wafting blouse of that girl next door. When stuck in a climate of intense social, political and emotional unrest, we fixate on the hope of magic. This time, it happens to be presented in the form of a goofy plastic ball, as if it were the catalyst for some kind of real solution to everything, since everything else has been completely divested of any kind of stable hope. Magic, if it has been discovered, must surely be a stable force that one can believe in and depend on. You can substitute “religion” for any instance of “magic.” It’s your call.
Television calls it Fushigi, and it seems to be thriving despite the unrest of its acolytes, simply because it’s far too easy to find more desperate, hopeless people looking for something to hold true.