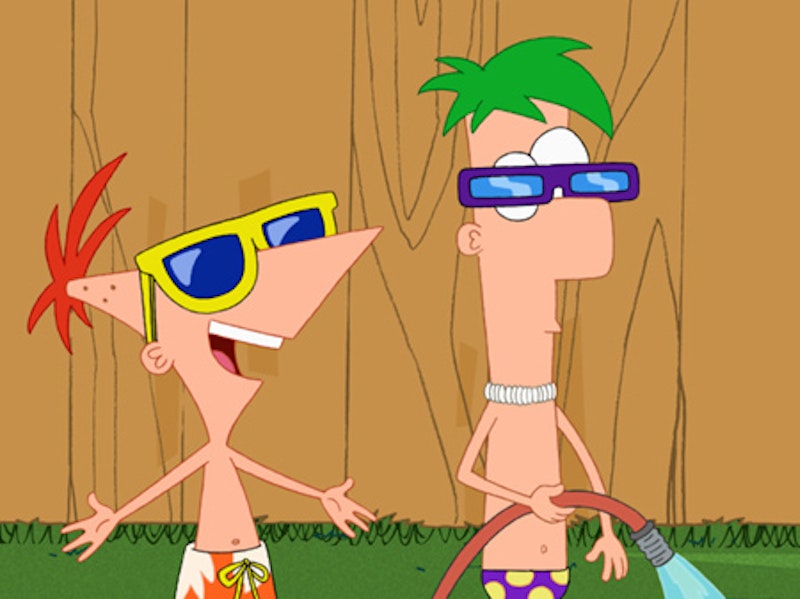 Has it really been 11 years since SpongeBob SquarePants hit the airwaves? And six years since what our German friends call Der SpongeBob Schwammkopf Film arrived in theaters?

The Disney Channel has had enough of seeing the Nickelodeon character dominating the merchandise stalls, not to mention the hearts and minds of both the children and the parents of America. And if Disney wants to overtake something, you can bet your last bootleg copy of Song of the South that they’ll spare no effort.

Hence, Phineas & Ferb, a way-above-average animated kids’ show that’s been around since 2007 but which Disney has tagged as the next SpongeBob. According to a recent New York Times article, Disney is hard at work trying to take the show to the next level and—employing math that’s “fuzzy,” per Nickelodeon—making claims that in some cases P&F is already beating the spongy one in the ratings.

Among Disney’s arsenal: Costumed characters at Disneyland; merchandise rollouts at Wal-Mart, Target, and the like; a monthly magazine; marketing efforts at MLB and NBA events; even a branded Kraft mac-and-cheese line.

Normally this kind of scorched earth policy would annoy me (and, given a few months, it still may), but in this case it doesn’t, for one simple reason: Phineas & Ferb is great. More Simpsons in its execution than SpongeBob’s Ren & Stimpy-isms (creators Dan Povenmire and Jeff Marsh are Simpsons vets), each half hour usually presents two separate stories with three plots: One centering on the goodhearted stepbrothers Phineas Flynn and the usually mute Ferb Fletcher as they pass their summer vacation by creating outlandishly complicated inventions; one on the travails of Phineas’ older sister Candace, forever trying and failing to expose those activities to their parents; and one on the super-agent adventures of their pet platypus, Perry.
Usually the three threads converge in some fashion, though one of the running jokes is that no one knows of Perry’s double life, being sent out by Major Francis Monogram to do battle with evil scientist Heinz Doofenschmirtz (or, as my five-year-old calls him, “Douche-en-smerts”), who’s intent on taking over, if not the world, then the never-defined “tri-state area.”

The jokes come fast and furious, as in the best Simpsons episodes, and if a few are pitched at a height ridiculously over most kids’ heads, so much the better. Pop culture and near-current events add accent to, rather than drive, plot (sorry, South Park), and the show rarely goes for full-out parody of familiar titles like the Simpsons’ endless Godfather, Hitchcock and Kubrick references.

Then there are the original songs, usually one or two per half hour, sung over montages or flashbacks by the characters (though apparently there are plans afoot for a Clay Aiken/Chaka Khan duet, an idea that seems disastrous in almost any context). An album of many of the better ones was released last September; Bowling for Soup’s boppy theme song, the nearly Kraftwerkian “Phinedroids & Ferbots,” and Candace’s immortal “Squirrel in My Pants”—already used for an NBA promo—are among the many highlights.

Even beyond the yuks, though, the series isn’t above showing some real heart. Candace’s pining for teen classmate Jeremy feels very real (though Jeremy’s fluctuating feelings for her are oddly inconsistent), and the episode “Dude, We’re Getting the Band Back Together,” in which the three kids work together for once to reunite the group at whose farewell concert Mom and Dad first kissed, was unexpectedly touching. (Just in case it got too sappy, the band’s name was Love Händel.)

Smartly funny shows for kids aren’t necessarily anything new, but finding one that can make parents laugh along is still rare. Nick Jr.’s Yo Gabba Gabba! is sufficiently out there to capture older stoner siblings and experimentally-minded parents as well as the target pre-school audience, and of course we’ll always have SpongeBob.

But P&F feels very much like it could join that company, as long as it stays true to its roots (and avoids too many Clay/Chaka duets). As Walt Disney’s frozen head itself might put it, it’s entertainment that the whole family can enjoy.