"And then the gay smiled, pressing a secret button hidden inside his Givenchy purse (Fall 2010 collection), and all of a sudden he grew 25 feet tall and roared a special mixture of fire and sequins." 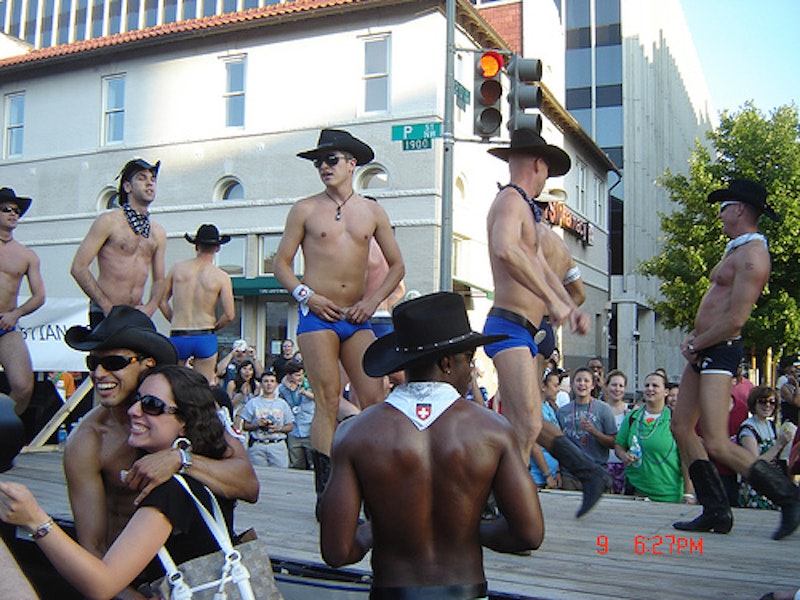 There’s a fat, prematurely balding dude with a basketball-shaped head in my neighborhood who really doesn’t like gay people. At. All. Every time I walk past the little pizza place he’s always at—obviously the extent of his social life—he makes some kind of anti-gay remark. Like these:

“That shit is nasty!”

“That gay shit is wack!”

When he throws these profound phrases at me, I don’t even trip. I just let it roll right off my back. But if it was Anna Wintour standing there laughing at me, telling me I was too fat, or that my outfit didn’t make any sense, or that I was downright ugly, I’d probably go slit my wrists and end it there.

We just had Gay Pride in New York, and I had absolutely no interest in participating. Once you’ve been to one Pride, you’ve been to them all. And last Sunday it was just way too hot in New York. Plus, I’m not really in love with parades, and I am gay every day, not just the last Sunday in June. I’m gay when these pizza dudes call me queer, I was gay when I wore sequins everyday in New Hampshire, I’m gay when I look at hot dudes (including you) and think about how much fun they’d be in bed, I’m gay when my boyfriend and I do it in the kitchen. So I guess I don’t really need Pride, do I?

All the things that the gays are fighting for—like gay marriage and a repeal of Don’t Ask, Don’t Tell—are great and everything, but homophobia is the real issue. That’s what causes the most harm, often verbal and sometimes physical. If a straight guy gets hit on by a “girl” who turns out to be tranny fierce, or if a gay guy hits on the aforementioned straight, the straight can beat the shit out of the tranny or the gay boi and call it “Gay Panic” defense. You mean you were so freaked out by The Gay that you felt the only way out was to beat him to death?

Thankfully, the homophobia I’ve experienced has been non-violent, with words and poorly crafted sentences acting as the venom. What makes this kind of homophobia work is that the fat homophobic jack-off just knows that the gay dude is too sissy to say something back. It’s a one-sided kind of thing: I’m big and straight and macho (roar!) and I can pick on the little gay faggot sissy queer because he’s too fragile to do anything about it. And sadly, it’s kind of true: if you react to the words, you might find yourself in the hot seat in the back of an ambulance.

So wouldn’t it be fun if all gay dudes had a secret super power? I don’t mean like being really good at BJs or anything, because we already are.  I mean, what if the queeniest gay boy was rolling down the street and some homophobe came up to him and started calling him names. Fag! Queer! The usual.

And then the gay smiled, pressing a secret button hidden inside his Givenchy purse (Fall 2010 collection), and all of a sudden he grew 25 feet tall and roared a special mixture of fire and sequins.

The Gay Givenchy Monster turns around and walks toward the fat homophobe now.

“What did you call me?” roars the gay. Then he picks the fat homophobe up by the waist—he’s light as a pencil—and forces him to lick his gay ball sack.

“Suck on those sequined nuts you heterosexual dickwad!”

The fat homophobe sufficiently frightened, the gay throws him to the ground, shrinks back to normal size, picks up his Givenchy, puts on his sunglasses, wags his ass in the air like he has a tail, sashays away.

Wouldn’t that be fun? I know it’s fantastical and everything, but I seriously think that one day soon, some homophobe needs to get his ass kicked by a gay dude. I’m getting sick of sissies being the victims of homophobia, without any kind of retaliation.

Instead of “Gay Panic” defense, which is totally lopsided and unfair, we need a “Straight Panic” defense—free license to beat straight dudes’ asses. That would teach breeders not to fuck with fags, wouldn’t it? That’s Pride.