Today's young women have the tough task of balancing their sexuality and their empowerment, and the line between the two has never been thinner. 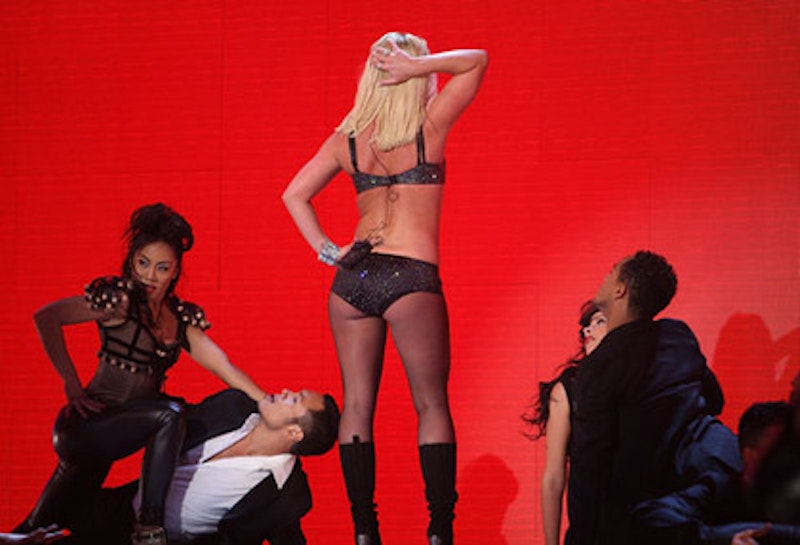 The mixed drinks and beer were almost all gone, and the party was getting crowded and loud. In a room full of boys and their female guests, several girls hopped onto the long table in the middle of the room and began to dance to the thumping bass blaring from the speakers in the corner. The boys all watched and cheered, sipping their drinks as the girls swiveled their hips, ran their hands over themselves and ground their hips against each other. "I feel so empowered!" one of them yelled as she danced on the table with her friends, clad in a miniskirt and sequined bikini top.

It was four days after a column I had written on feminism for men had appeared in the college newspaper, and the girl in question was poking fun at me. But it occurred to me as I watched her dip, roll and writhe, that she might have actually thought that empowerment for women was as simple as dancing on a table in front of a bunch of boys who were understandably enthralled by her gorgeous body and mobile hips.

She wasn't alone-there were four other girls dancing with her. Several of them were my friends and all of them took their academic work in molecular biology, religion, or aerospace engineering very seriously; these were not stupid girls. I understand that when we think about our bodies, there's a fine line between, on the one hand valuing and enjoying our bodies and sexualities as important parts of who we are, and on the other, basing our entire self-worth on our bodies and how other people desire and enjoy them. Unfortunately, when it comes to behavior, "fine" doesn't begin to describe that line. I have no way of knowing what was going through that girl's mind when she jumped on that table and started dancing, and I wouldn't pretend to know such a thing. What I suspect, though, is that her cry of "I feel so empowered!" was that girl's way of telling me that as a feminist, I had no right to object to her behavior, since after all, she was just making the "personal choice" to "express her sexuality."

But I do object to her behavior, because I don't believe it was really a personal choice. In that moment, no one coerced her to get on the table, and no one forced her to dance, so it would be easy to argue that what she did was of her own free will. But walk out of that party and turn on the TV or open a magazine, and you'll recognize the similarities between women there and the women you just left dancing on the table. When almost every female role model we're presented with is sexual but silent, can you really blame that girl for thinking that her decision to dance on that table was not only a personal choice, but also a positive, feminist act?

A quick glance at today's various media outlets sends a frightening message about our culture, which is that women in this society are valued for their bodies far more than they are for their minds. There are, of course, individual men out there who defy the media's emphasis on the physical, but the fact is that every day, millions of young men and women are getting the message that how a woman looks is more important than how she thinks. Paris Hilton is not famous for her mind (in fact, she's famous as much for her failure to use it as she is for her good looks). Britney Spears didn't become a full-fledged superstar until she shed her virginal image and sexed-up her choreography. For years, we've been told that what makes a woman valuable is her body because it is her body, not her mind, to which men are attracted.

Sometimes that message is subtle and sometimes it's not. More often than not it's ambiguous and open to interpretation: is Sex and the City's Samantha a sexually liberated woman, or is she conforming to the old sexist idea that only sexual and sexually available women are valuable? Is it new feminism, or just old ideas dressed up as feminism? This is a fine line that all of us walk and a question that we all struggle with. What is unambiguous, though, is that the media provides us with so few female role models whose value comes from their intelligence, their wit and their talent, it's no wonder that many women sometimes fail to value our own minds before our bodies.

But it doesn't have to be this way. Just as there are individual men who see past the media bullshit of boobs and love women for their brains, there are steps that individual women can take to make sure that feminism's promise of brains over beauty comes true. What we need is to find ourselves more female role models, and we can find them in thinkers, authors, writers, politicians, scientists, comedians, doctors and teachers-in short, people whose value to society comes from their thoughts, words and actions, and not from their flat stomachs.

Ladies, I'm not condemning the act of dancing half naked on a table in a room full of avidly watching men. I am condemning using the feminist ideal of "personal choice" to justify it. Dance on that table if you must, but I urge you to think hard about why you're doing it. And it's not just table dancing I'm talking about. Next time you call something a feminist act because you did it by "personal choice," I encourage you to ask yourself: when the idea that women are valuable only if they are sexually attractive is so strongly enforced by our culture, is it possible that what you're calling a personal choice isn't really your choice at all?