The Most Fun You Can Have With Your Clothes Barely On

Bikram yoga pushes you beyond self-consciousness. 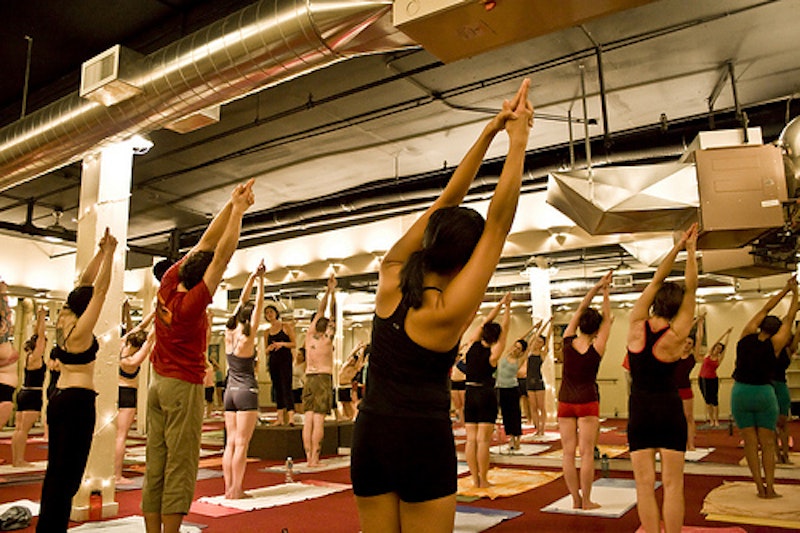 Bikram yoga, also known as “hot yoga,” is probably one of the stupidest things you can do during a New York City summer. It’s 95 degrees outside, the kind of sticky, oppressive heat that makes you want to go see Disney’s new rodent-themed animated action movie simply because the theater is air-conditioned. Yesterday, I voluntarily spent 15 minutes in an American Apparel store, surrounded by gold lamé leotards and fluorescent pink tube dresses, because the cool air drifting out of the front of the store as I walked past felt too good to resist.

So why, during a New York City summer, would I voluntarily step into a room that’s heated to 105 degrees, and then proceed to exercise? Because it’s the quite possibly most liberating workout I’ve ever had.

To my first-ever bikram class, I wore the usual: yoga pants. Big mistake. It soon became clear, as I began sweating from places I didn’t even know could sweat (kneecaps!), that the trick to this class was to wear as little clothing as possible. Like other kinds of yoga, bikram would require me to bend and stretch and contort the body. But unlike other kinds of yoga, bikram left me no choice but to strip down to shorts and a sports bra.

Easier said than done. Like most women born and raised in this culture, I’d rather not stand half-naked in front of a mirror and room full of strangers. As a survivor of gymnastics, dance and all-girls’ high school, I’ve struggled with body image. But my first bikram class left me feeling something that I so rarely get to experience: I was in awe of my body. For one thing, I never knew it could sweat that much, or withstand the heat of the bikram studio. For another, I never imagined, even after 15 years of dancing, that it could ever be cajoled into some of the positions that bikram demands.

I was also in awe of the bodies around me. The instructor and the more experienced bikram practitioners were so strong, so flexible and had such balance that I would look around, amazed at the expertise and elegance with which they maneuvered their limbs. I also noticed that the best practitioners, the ones who looked the most at home twisted into sweaty pretzels, and somewhat incomprehensibly, seemed to be enjoying themselves, weren’t necessarily the thinnest, or the most muscular people in the room. There were men with sizeable guts who were outstretching the slender men next to them. There were middle-aged women with wide thighs and full hips, women who didn’t look at all like athletes, who could do simply incredible things with their bodies.

We spend a lot of time looking at ourselves in the mirror and criticizing what we see.
In a world where bodies, and especially women’s bodies, are mostly decorative, we’re rarely encouraged to value our bodies for what they can do, and focus instead on how they look. In the mirrored wall of the bikram studio, I saw a range of bodies, very few of which looked like the idealized forms we’re accustomed to admiring. Some of them were lean, some of them were overweight. And all of them were working. All of them were sweating. It was liberating to spend time in a place where shape and size were irrelevant. Besides, it’s hard to feel ugly in a room where everyone is pink-faced and drenched in their own sweat.

So if you can’t beat the heat this summer, why not join a yoga studio? There’s no gold lamé, no animated guinea pigs and no air conditioning. But there is a space, and a stretch of time, that are devoted just to you and the things your body can do.