On Jerry Lewis, recently kicked to the curb. 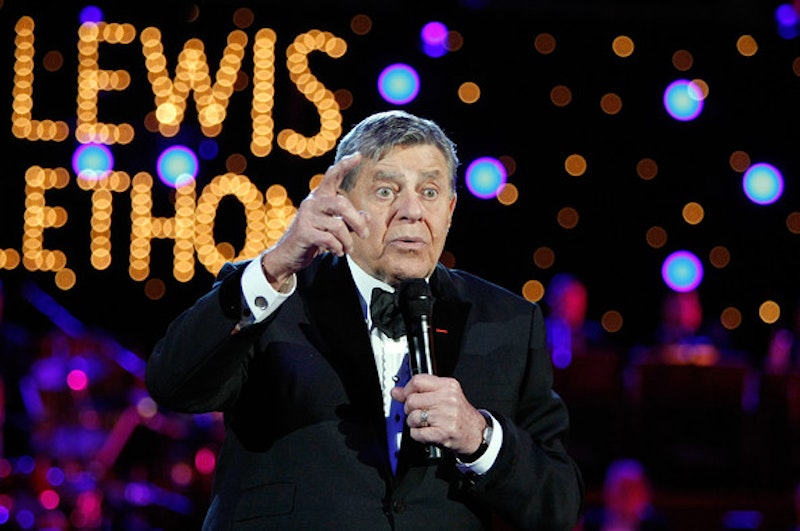 Most people don’t stick around until they’re 85 to be shown the door. Then again, most people aren’t Jerry Lewis. (And, besides, he’s already seen the door [rimshot].)

On Monday, the Muscular Dystrophy Association announced that Lewis would be “retiring” from the annual telethon he’s hosted since 1966. “I’ll continue to serve MDA as its National Chairman—as I've done since the early 1950’s,” Lewis declared in the official MDA release. “I’ll never desert MDA and my kids.”

There’s a very real sense here that Lewis is hardly going quietly. After all, the group announced last October that it was reconfiguring the telethon, cutting it from 21.5 hours to six and no longer broadcasting it live in much of the country. As Chicago Tribune columnist Phil Rosenthal pointed out:

[T]he MDA's news release of more than 750 words didn't mention Lewis until after almost 450 words in a reference to his surprise 1976 telethon reunion with former performing partner Dean Martin arranged by Frank Sinatra. The news story posted on the MDA's Web site didn't mention Lewis at all.
“I will be here as long as I breathe,” Lewis declared during last year’s event. “Think again,” you can imagine the MDA pooh-bahs saying to each other.

Lewis being Lewis, it hasn’t all been smooth sailing. Borscht Belt lines about homosexuals and women don’t fly any more, and suggesting (as did on the air last year) that Lindsay Lohan needs to be smacked, while probably true, doesn’t play in the current culture either.

Truth be told, the Lewis telethons have grown less interesting since the early 1970s, when Jerry gave up the Percodan and (understandably) stopped leaping around the stage. Instead, anyone who’s tried sitting through more than a half-hour of the show knows the drill: Jerry sits there, looking about as bored as you feel, while a ceaseless parade of corporation leaders and professional organizations troop out to robotically read cue cards and hand him checks worth millions of dollars. Then he introduces some ventriloquist or saloon singer, we cut to the local coverage, rinse, and repeat.

Humanitarian that he is—and keep in mind that Lewis has been donating time and money to this cause since the Martin & Lewis days, without ever saying exactly why—there’s still that sheen of ego, that “Lookit me!” that permeates everything he does. The MD-afflicted are not society’s kids—they’re Jerry’s kids, dammit, even if some of them object to that conceit.

So begins Lewis’ last, slow fade from public consciousness. It’s somehow fitting that he’s getting forced out, as it’s hard to imagine Lewis, who’s rebounded from drug abuse, back problems, steroids, and untold reams of critical opprobrium, willingly hanging it up, retiring from active duty like a Johnny Carson.

I use Carson advisedly; he was, after all, Martin Scorsese’s first choice to play Jerry Langdon in The King of Comedy. But it’s impossible to imagine the buttoned-up Carson in the role. Scorsese was the first filmmaker to tap into the vein of self-loathing that runs through Lewis’ own personality since—well, since Lewis himself. For all the King’s excellence—DeNiro and a never-better Sandra Bernhard—it’s Lewis who rightly towers over the entire film.

There have been plenty of jokes about how them Frenchies are so wacky ‘cause they love their Jerry Lewis, but the Gauls actually have it (at least partly) right. Lewis’ reverence for Charlie Chaplin shines through in his still sidesplitting silent/miming bits (never more so than in his directorial debut, 1960’s The Bellboy). Unfortunately, he’s also guilty of Chaplin’s frequent swerves into mawkishness, as anyone who’s sat through the likes of The Family Jewels or The Geisha Boy can attest.

Even during the Martin & Lewis heyday—during which time Lewis freely referred to his role as “the monkey” to Martin’s smoothie—the young comic was peppering directors like Norman Taurog and Frank Tashlin with questions, learning how to become a filmmaker in his own right. Once he started making his own flicks—and garnering the attention of Frenchies like Jean-Luc Godard for his sense of surrealism and the still jaw-dropping set design in The Ladies’ Man—Lewis felt compelled to pen, with characteristic humility, The Total Film-Maker. Along the way he also popularized the “video assist,” the system whereby a director can review a take seconds after it’s filmed, rather than wait for the evening’s rushes.

As he aged, Lewis become less than a “total” filmmaker; while King gave him a new lease on professional life, leading to memorable roles in everything from TV’s Wiseguy to Emir Kusturica’s Arizona Dream, it also gave us the barely watchable likes of Slapstick (Of Another Kind) and his own Cracking Up.

But it’s the 60s films that will stand the test of time, especially his generally acknowledged masterwork, 1963’s The Nutty Professor. Still held by some to be a bitter swipe at Martin, the film’s creepily egocentric would-be smoothie, Buddy Love, is all too clearly a self-portrait of Lewis at his smarmiest. For that reason alone it’s still a potent picture; throw in Lewis’ shenanigans as the klutzy Julius Kelp and you’ve got a near-perfect comedy (notwithstanding the truly awful final sequence, which nearly negates the goodwill the film engenders).

While the MDA telethon may go on without Lewis, perhaps with a new, what’ll-he-do-next host, it can’t help but always be synonymous with The Monkey’s name. As Lewis has put it: “I was about as discreet as a bull taking a piss in your living room.”