Does America’s sweetheart ever get a day off from being perfect? 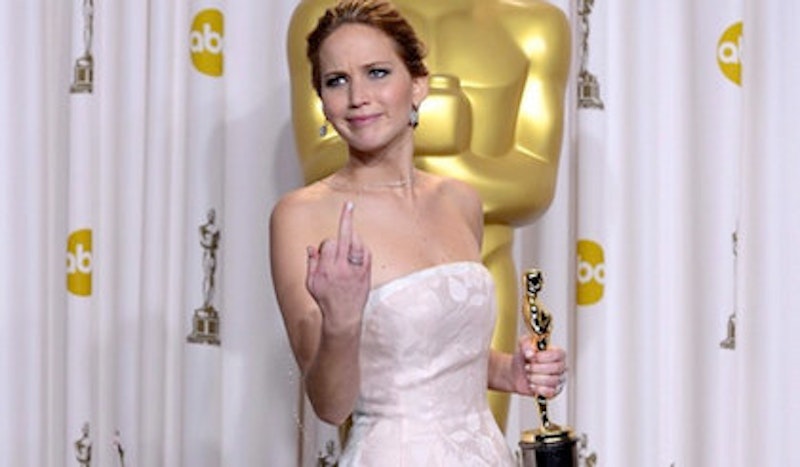 You don’t have to follow Hollywood to know that Lawrence, Academy Award winning best actress from Silver Linings Playbook and the infamous Katniss Everdeen of The Hunger Games is America’s current favorite sweetheart and undisputed national media darling. As our country is wont to do (see: J-Lo, TSwift, JT, Bey, 1D, etc), we’ve even bequeathed her with a nickname, “J-Law,” making it more difficult for her to escape expectations of pop cultural icon perfection.

I recently read an article about her in Instyle magazine and couldn’t find anything not to like other than maybe her complaint about someone at a nearby table trying to take her picture. (Really? If you want privacy while giving an interview, don’t order Eggs Benedict at a hotel restaurant). I loved her interview with Jon Stewart, but then again I love anyone who’s interviewed by Stewart. I love that she flipped the bird while holding the Best Actress Oscar.

The Internet went wild last month over news that the actress, born in 1990, had been photoshopped for a magazine cover. She’s become a champion of body image, often talking about “eating like a caveman,” chowing McDonald’s or random items from her pocket, asking for food on the red carpet, etc. There is some criticism of this “I love French fries!” routine. In her piece “Jennifer Lawrence Body-Shames You More Than You Might Realize,” Huffington Post writer Jenny Trout makes the valid point that it's easy for a perfect-looking actress to complain about being "Hollywood obese" (what is she, a size two versus a zero?) making it somewhat unrealistic for girls to obtain the physique of their idol.

The charming Lawrence says all the right things, though. Her famous collection of body image quotes including “We have to stop calling each other fat” and “If anyone even tries to whisper the word ‘diet,’ I’m like ‘you can go fuck yourself’”, are just the kids of words young girls need to hear from their heroine, even one who appears physically perfect.

She’s not just an icon; she’s got actual wit, intelligence and talent. Her acting chops are undeniable. She was fantastic in Winter’s Bone, and she’s fabulous as a 70s New Jersey con man’s wife in American Hustle; hell, she even makes out with Amy Adams.

SHE IS KATNISS, for Capitol’s sake, which means millions of girls the world over will grow up with Jennifer Lawrence as their first-ever favorite actress.

So now what? Well, so far she has managed to avoid the train-wreck life choices of the likes of Britney Spears, Lindsay Lohan and Miley Cyrus, though none of those girls have a tenth of her talent. Could it be that like Sandra Bullock, Jodi Foster, Meryl Streep, Emma Watson and other talented actresses were at the beginnings of their careers, Lawrence is simply is at the early stage of a long, prosperous acting career and we as a nation will be lucky enough to enjoy her work for many years to come? Though it’s a tough road to be her, I hope J-Law doesn’t let us down.