Like so many identity-defining isms, feminism can be a blessing and a curse. 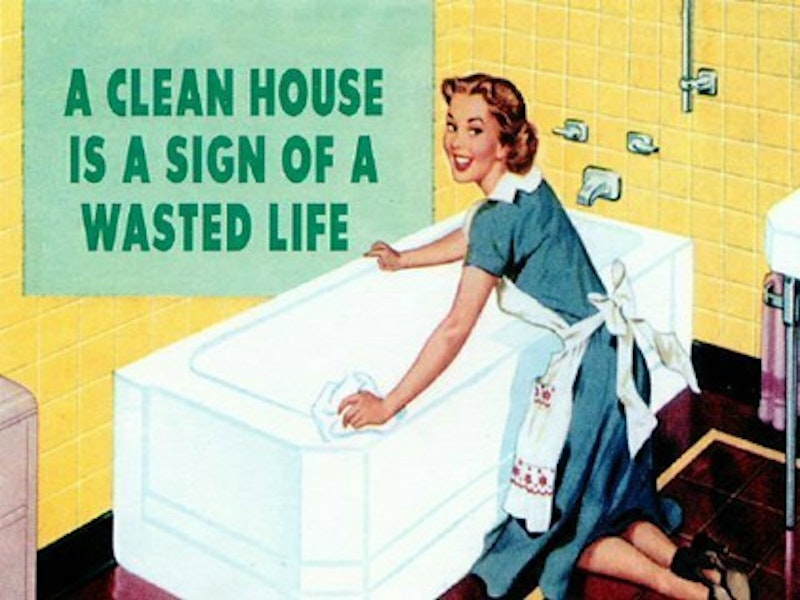 Isms can be so oppressive. There are the obvious ones, like racism and sexism that marginalize entire groups of people through direct and indirect discrimination. Even those that one adopts with a positive purpose, though—to promote equality, push for political reform, or protect the environment—can end up feeling like an enormous cross to bear.

I am proud to call myself a feminist. While not immune to ideological extremes (i.e. the near-mythologized “feminazi”), feminism, at its base, recognizes the gender inequality inherent in our society, culture and politics and aims to correct this imbalance by advocating for women’s rights throughout the world and rejecting systems and products that perpetuate women’s subservience. It is an admirable endeavor and one that I’m happy to be a part of, but at times it’s a burden.

It’s not easy to always act in accordance with your ideologies. Take a simple activity, like reading Cosmo. The most notable archetype of the “ladies’ magazine,” Cosmopolitan is abhorrent in its sexualization and objectification of women. It promotes and aggrandizes an unrealistic and unhealthy body image. It masks female degradation in the language of self-improvement and equates success with vapid accomplishments like perfectly applied makeup and a closet full of dresses that cost more than my annual salary. I fully recognize how Cosmo contributes to the inequality that I wish to exorcise, but its tasteless articles with the little sex graphics are like mini-porn that is acceptable to read in a crowded airport! It’s fun filth. I would never even think of subscribing, but I’m willing to throw down $4 every now and then to learn how I can blast my fat in 10 minutes flat. And on those rare occasions when a girlfriend comes to visit me and leaves her copy at my apartment? Jackpot! It’s intriguing even if it is all bullshit. Ideally, I wouldn’t give any money to these kinds of publications and an utter lack of readership should be my personal protest against the sexist nonsense they espouse. But Cosmo is like a literary chick flick: sometimes it feels good to zone out and just ignore the gender stereotyping.

Relationships can be equally problematic. It’s not that feminism purports coupledom as the antithesis of women’s independence, but there’s something particularly admirable about a woman who eschews conventional relationships, provides for herself and unapologetically lives according to her own desires. Despite the cooperative nature of relationships, reliance on a man and any disposition toward traditional gender roles can feel like a disservice to all those who worked so hard to prove that a woman’s worth extends beyond the roles of wife and mother. There’s been somewhat of a backlash lately—Ivy League-educated women forgoing careers in favor of motherhood, a resurgence of newlyweds taking their husband’s names—insisting that because we are independent we can choose to be more traditional, but that assertion feels more defensive than pragmatic.

There’s some logic behind the belief that enacting traditional gender roles slowly reverses the gains past feminists made. While I don’t believe we’re at any risk of slipping back to 50s-style gender relations, it is legitimate to ask how we can promote greater independence for women in other nations if we aren’t fully demonstrating that independence here. Plus, when your actions don’t support your words, it’s a disincentive for others to take your call for gender equality seriously.

I got married at 23. I can say time and again that I did so because I fell in love with a man I met in high school, not because I needed someone to take care of me, but to those who oppose your ideologies, actions speak so much louder than words and my behavior is practically deafening. I see myself as my husband’s equal and we share most household responsibilities, but I like knowing that he’s there to protect me and don’t feel confident that I could fend for myself without him. I love being pampered from time to time. I don’t mind cooking and cleaning and to be totally honest, if we could afford to live on one income, I’d happily give up my job and sit around all day reading books while he’s off being the sole breadwinner.

The truth is, it’s just hard to be a good feminist all the time and I’m not even sure that doing so is really a positive thing. I often feel that feminism has shifted too much from its ideological base of gender equality to one of promoting women at all costs. When pundits wondered about Gov. Palin’s ability to be both mother and VP, I found the outcry of sexism from both conservatives and feminists a bit alarming. “That question is sexist! No one has asked Obama that!” they said, and they were right. But I have to ask, sexist towards whom? Palin has made it perfectly clear that her role as wife and mother is central to her identity both personally (every speech so far has started with an introduction of her family) and politically (“families of special needs children...will have a friend and advocate in the White House”). It seems reasonable then to wonder how she will balance caring for her family (a responsibility that is important to her) with potentially caring for an entire nation.

Sen. Obama, like Palin, has young children who have joined him on stage, who he has referenced in speeches and who he clearly loves and cares for very much. Yet no one has asked him how he’ll balance his family life with the responsibilities of being President. The assumption is not that he can handle it because he is a man, whereas Palin cannot because she’s a woman, but that Obama will not have to handle it, because he’s just a father. To ask a woman how she will fuse career and parenthood is to recognize that they are of equal importance in her life. Women are increasingly encouraged to define themselves as both caregivers and careerists. Not posing this question to male candidates with similar familial situations is to limit their identity to their careers and ignore their importance as caregivers.

It’s not enough to only advocate for women’s equality. Too often as feminists, we’re inclined to view every experience and every question in terms of how it is potentially sexist towards women and ignoring how it affects men. If we want gender equality we need to advocate for men and women equally. There’s no point in promoting maternity leave if we’re not pushing for paternity leave as well. We can’t ask for better support of single mothers if we don’t also ask for more support for single dads. I’m willing to accept that feminism oppresses me by forcing me to be more progressive than I’m sometimes capable of, but let’s make that the only kind of oppression. I’d hate to fall into that marginalization territory. Feminism is better than that. It’s about balance.