The Importance of Harbor East

Baltimore's now a pre-fab city, which shouldn't surprise anyone. 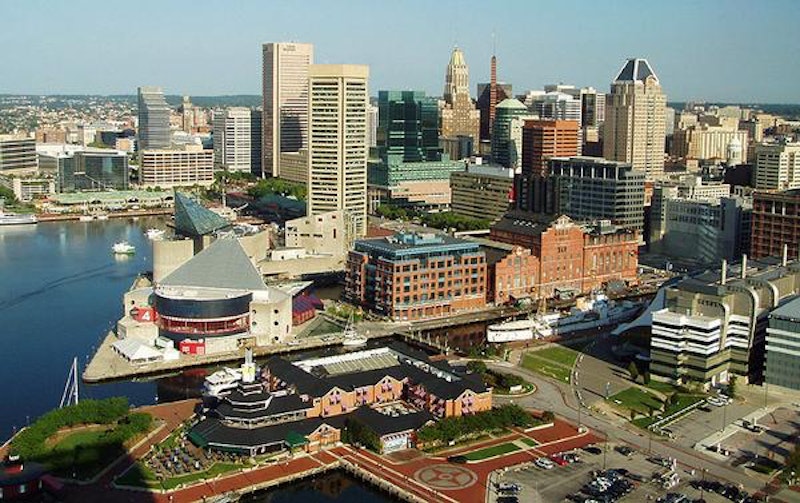 It was mid-afternoon last Saturday in downtown Baltimore and I was casually eavesdropping on a quartet of old Italian geezers at an adjacent table while waiting for my son’s food order to be processed. It wasn’t the banter that captivated me—rather mundane opinions about estate planning, nursing homes and medical procedures, as the men sipped plain black coffee—but rather the setting. A generation or so ago, these guys, who had mafia written all over them, would be taking their break at a clubhouse or restaurant in the city’s once-vibrant Little Italy, drinking espresso, perhaps, uninterrupted by the flow of strangers wearing t-shirts and flip-flops. But we were all, for better or worse, temporarily marooned in a sprightly decorated place called Elevation Burger, one of the latest anywhere-in-America chains that have opened in Harbor East, Baltimore’s current hub of tourist and residential activity.

The several blocks that comprise Harbor East, which has supplanted Baltimore’s Harborplace—the once-glitzy inner city outdoor/indoor mall developed by the late James Rouse which opened in 1980 to enormous civic fanfare, but has since fallen on hard times, its rotating roster of high-end retailers and restaurants giving way to tacky gift shops and vacant storefronts—has, at least for those city dwellers who take notice of shifting urban trends, caused a minor stir in the local media (such as it is) and good-government associations. Earlier this month, a front-page story in the tissue-thin Baltimore Sun, “Redrawing downtown: Shift adds vibrancy along harbor, vacancy in city core,” included two quotes from Carolyn Boitnott, coordinator of the Waterfront Coalition (gung-ho, pro-expansion representatives were afforded more ink), one of which read, “I think downtown is getting worse. My husband and I went to the Hippodrome [a onetime staple of downtown nightlife] the other night and tried to find a place to have dinner; and it was a dead zone. A lot of things that should have stayed downtown have moved out.”

Easy for Boitnott to say, but it’s a plain fact that most of the “things” she believes “should have stayed downtown” were forced to move or close for simple economic and demographic reasons. I don’t like Harbor East one bit (although the multi-screen Landmark Theater is very handy), with its mish-mash of establishments that don’t exude one shred of Baltimore authenticity—Whole Foods, CVS, Elevation Burger, a not-yet completed Four Seasons hotel, Starbucks, and so on—and the architecture is remarkably anonymous and ugly. Standing in the center of Harbor East, a person would be hard-pressed to identify the city he or she is in—Baltimore, Cleveland, Philly, Los Angeles, even New York, it really could be anywhere—and it’s rather wistful to look into the distance and see the city’s landmark Belvedere Hotel, a grand building at Chase and Charles Sts. that opened in 1903, back when Baltimore was hardly considered a second- or third-tier city. At least the Belvedere is still operating—albeit as a down-at-the-heels condo/shopping combination—unlike any number of destination restaurants such as the Chesapeake, Pimlico Hotel, Danny’s or the fabulous Leon’s Pig Pen, which were rich in Baltimore tradition.

Nevertheless, as Johnny Cash sang, “You ask me if I’ll get along/I guess I will, someway/I don’t like it but I guess things happen that way.” I’m sure that for younger Baltimoreans it’s hard to believe that when Rouse’s plans for Harborplace became public in the late 1970s, there was a pitched battle between business groups and The Citizens for the Preservation of the Inner Harbor (CPIH), the latter leading the charge that the Inner Harbor’s “open space” would be forever violated if the rampaging Rouse had his way. In fact, the question of Harborplace was put on the ballot on Election Day in 1978 and, though opponents were vocal, it passed handily.

The hue and cry baffled me: as a young co-publisher of the City Paper, I couldn’t imagine why anyone would be against replacing the rotting piers downtown with viable retailers and restaurants that would attract those who fled to the suburbs in the 1960s, as well as tourists. When City Paper endorsed Harborplace that year, the paper was inundated with phone calls and letters that branded the weekly as a “sell-out,” and some readers expressed anger that an “alternative” paper could be a pawn of corporate interests. In truth, although I was indifferent to the aesthetics of Rouse’s project (his Faneuil Hall in Boston was the model, and it was devoid of character, cannily anticipating the rise of “yuppie” culture several years later), downtown Baltimore was moribund and needed some attraction more permanent than the annual City Fair.

When I arrived in Baltimore to attend college in the fall of 1973, just five years after the riots in the aftermath of Martin Luther King Jr.’s assassination decimated the inner city—there are still boarded-up houses from that era in East and West Baltimore, which is a condemnation of Baltimore’s succession of mayors since that time—there was almost nothing to do in the city, which was mostly shuttered after eight p.m. Music venues, which once thrived, were confined to a few bars in Fells Point for local bands and the Civic Center for the occasional larger act like the O’Jays; book and record stores were few and far between and a once-thriving Chinatown was reduced to a block or two.

Sure, the regional eccentricities—the crab and coddie culture, Almond Smash soda, men who peddled fruit from horse-drawn carts (known as “a-rabs”)—were mysterious, puzzling and just incredibly cool, but it wasn’t a youthful city. To a large extent, Harborplace gave suburbanites a reason to return downtown, and as a consequence, new construction took place, forgotten neighborhoods like Federal Hill were renovated, and at least one part of Baltimore prospered. (Of course, then, as now, Baltimore, like Washington, D.C., is an example of de facto segregation, with the majority black population shut out of the “renaissance” championed by longtime mayor—and future governor—William Donald Schaefer, but that’s another, and far more depressing story.)

So, I’m in agreement with a lot of detractors that Harbor East is (for now) a pristine eyesore, but it’s not as if Baltimore is unique in filling its core downtown area with hotels, restaurants and retailers that are ubiquitous across the country. Calvin Coolidge famously said in 1925, “The business of America is business,” and if Harbor East—and its inevitable successors—prevents Baltimore from becoming another Detroit, I’m not going to complain too loudly.