The Girl in the Bottle

A 60s TV star reveals what a drag it can be to drive men wild. 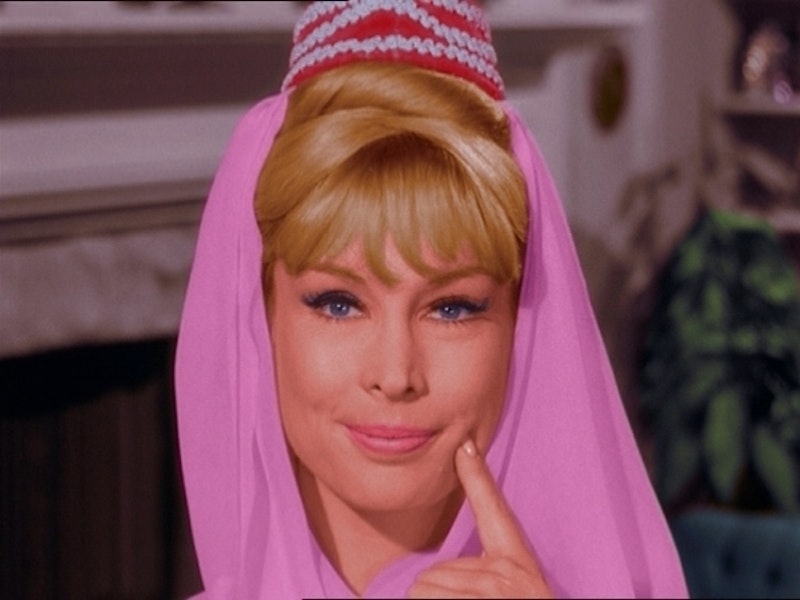 Barbara Eden had her first brush with Hollywood casting in the mid-1950s, when she was 20. It was a meeting with the “head talent scout at the Warner Brothers studios,” a meeting that did not go well: “to my everlasting shock, he pulled out a picture of his daughter, Lonnie, and said, ‘See, honey, that’s what you need. Big tits!’” Soon she was crying in her uncle’s car as he drove her home. But events reversed themselves. A few months later she was on the lot to see an acting teacher. A “male voice behind me” hailed her in peremptory terms. She stopped and there was the same man, now with no memory of her but with a firm impression of how she looked from the rear. This time he said she had to take a screen test—maybe she was a star after all.

You’ll notice that the talent scout didn’t try to make time with her, and that Eden accepted the fuss over what a male pal in the business “kiddingly termed my ‘bubble butt.’” There was a certain innocence on both sides. She didn’t like hearing “tits,” since she was properly raised, but she and the man weren’t dealing in sex per se, just merchandise, the goods, what it takes to get male eyes focused on a screen. On Eden’s part this innocence was in addition to the usual kind. When she danced at Ciro’s, the other girls called her “the Little Virgin.” After she got married, she shot a movie on location with Elvis Presley; her chief memory of him, a tender one, is his good manners.

Eden’s big break came when she was 30 and cast in I Dream of Jeannie. The sitcom was about a girl who lives in a bottle and has an owner, a young airline pilot whom she calls “Master.” Given that the girl is a genie, Eden thought it would be cast with someone dark, “Miss Greece or Miss Israel.” No, the producers wanted her, a kittenish little blonde. We can guess why. In Jeannie Out of the Bottle, the book in which Eden and a helpful writer tell her story, she quotes an old TV Guide article that calls the program “the only show… in which an attractive unmarried girl has the free run of a bachelor’s apartment.” The year was 1964, and for a breakthrough like that a blonde was required.

Post- Jeannie, Eden enjoyed a long run of TV movies and Vegas casino appearances. But the show was her career capstone, the perfect vehicle for a sweet-natured woman who liked good manners (Frank Sinatra was “lovely to me,” Cary Grant was “unfailingly kind”) and had a body that turned men into flies near meat. There’s something about being a small, cheerful blonde with a shape. Warren Beatty, then a kid in a TV series, would lurk near her dressing room and chant, “Barbara Eden! Barbara Eden! I’m gonna come and get you right now!” Burl Ives, a portly old party with a Van Dyke, actually tried to follow through. “‘Come here, little girl. Come here,’” he would say. “Then he’d lunge straight at me.”

That’s when Eden was still south of 30. The effect kept on for decades more. Tony Curtis, visiting with his kid and stoned out of his head, took Eden aside to say something she won’t repeat to us, something that caused her teenage son to threaten to beat him up. Buzz Aldrin, second man on the moon, wasn’t satisfied when she kissed his cheek during a publicity shot: “He grabbed me, declared ‘I can do better than that,’ and kissed me right on the mouth.” She didn’t like it. In fact Out of the Bottle provides a useful study in what a drag it can be to drive men wild.

O.J. Simpson makes an appearance, of course. At an award presentation, Eden says, Simpson was “all over me like a bad case of measles.” He whispered various propositions in her ear until she managed to get out of range. Later he apologized in a way she found disingenuous. She retaliated in typical fashion: “I merely shook my head and moved away from him.” Her mother raised her on the motto “Rise above it,” and that’s the only gear Eden has. Confrontation isn’t her thing, so she gets by as best she can. On O.J.’s remarks: “I’m not unaccustomed to men speaking to me that way, but when they do I somehow manage to tune it out.”

Along with the whispers and grabbing, there has been a good deal of ill will from the people who watched her being grabbed and whispered to. Being small, a cutie, Eden has been given frosty once-overs by taller and older female stars such as Ann Sothern, Lauren Bacall, and Katharine Hepburn. Marilyn Monroe was different. Meeting her was a thrill, even if she didn’t say much beyond “Oh, oh, Barbara, it’s so nice to meet you”—good manners again.

The worst fallout from Eden’s sex kitten status has been the effect on the men in her life. She says that Larry Hagman, her co-star on Jeannie¸ became impossible when he realized he was just the guy standing next to the hot girl. By her account, he would get stoned and drunk during shoots and once swung an ax at a group of visiting nuns. When he didn’t like a script, “his answer was to throw up all over the set.” Even better, she says he let a string of drool out of his mouth when Sammy Davis Jr. was on camera for a guest shot.

Eden’s first marriage, to a TV actor named Michael Ansara, folded up when his career ended and hers kept going. Her second marriage, to a newspaper advertising executive, suffered when restaurant maître d’s made a fuss over her and not him. A warning sign: They met when he grabbed her during a publicity appearance she was making. “Hey, somebody take a shot of me with my fantasy dream girl!” she recalls him saying.

That marriage ended too, and her son by Ansara—the boy who threatened to beat up Tony Curtis—would die of heroin and steroids at age 35. Eden also suffered a miscarriage, and it was back in the days when some doctors thought it was safer for the mother to go about with the dead child inside her until the delivery date had arrived. What does it take to get Barbara Eden to call something “barbaric”? Well, that. But she didn’t let the public know what had happened, nor did she go into hiding. Fans asked what the baby would be called, and she “fixed a rictus of a smile to my face.” She was a trouper, and as always she believed in good manners.