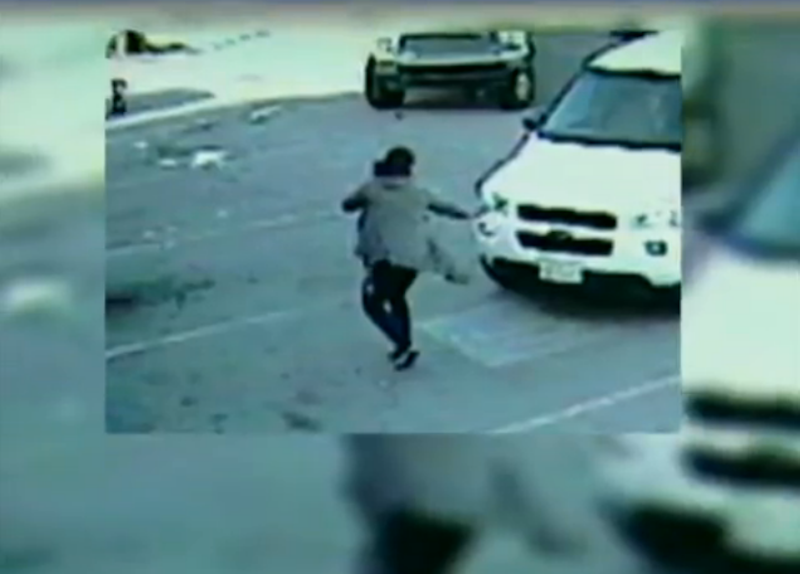 Grocery store violence usually happens long before we arrive to shop: unkempt paparazzi stalking the fruits of their labor, migrant farmworkers clocking 16-hour shifts, hefty dudes wearing fanny packs full of speed while hauling rigs back and forth across the nation, slaughterhouse floors drenched in bovine blood and viscera. Sure, shit goes down in grocery stores from time to time, like a fed-up mom who’s had enough of a mouthy kid hauling off and punching the brat in the mouth, or some klutz dropping an economy-sized jar of spaghetti sauce. But stuff like what you’re about to see never, ever happens in grocery stores, unless you happen to live in a significantly more exciting locale than me:

There’s not much to say about that, is there, aside from “wow.” It’s ours to wonder what precipitated what we just saw, whether the bone of contention was a parking spot or a plum cart of the last can of Spam. Climbing into someone else’s minivan window to throw left hooks and run your mouth—and then basically daring the driver of that minivan to run you down? This is not sound adult decision-making. Then on the other side, as the driver, you couldn’t have rolled your window up and driven away before the situation escalated into some World’s Dumbest bullshit? Part of the problem, I think, is that people are afraid to be wrong, even in public situations where there’s some communal utility to apologizing sincerely even if something wasn’t your fault. There’s also something to be said for letting a stranger have the last box of Cocoa Krispies, in the same sense you’d lean on your brake to allow someone coming off an exit ramp to merge into your lane.

Most troubling about this video is the blithe indifference of surrounding strangers to what’s happening right there; the pedestrians wandering by without a care in the world, the nearby autos pulling out and rumbling away. It’s as if everyone took refuge in the sort of tunnel vision that smart phones enable, and two women brawling in a very real, very physical way in a very public sphere was just another distraction nobody much noticed.