The East Coast Down Under

Returning to Australia after a year away shows the subtle cultural changes that the country is experiencing. 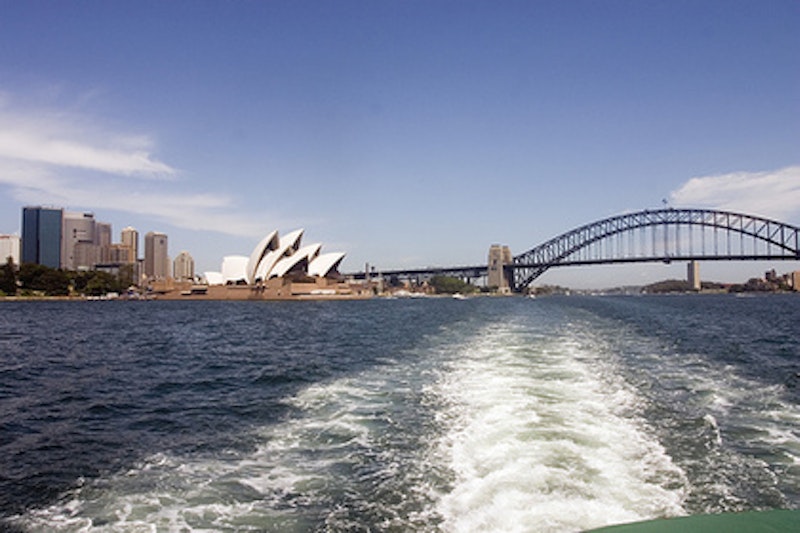 Twenty-four hours after taking off from JFK International in Queens, Qantas Flight 108 landed in Sydney. As the wheels touched the tarmac and 300 passengers applauded a successful landing, I felt an enormous rush of relief. It was partly because I had been cooped up in a confined space for almost an entire day, aware with every breath I took that the air filling my lungs had probably been circulated through the cabin three or four times already, but also because, in the words of Qantas' own (very cheesy) theme song, I still call Australia home.

At the end of a long flight, and at the end of a much longer year away, the seemingly endless Pacific Ocean suddenly gave way to Sydney Harbor, causing my stomach to jump and a grin to spread over my exhausted face. The moment was well worth the exhausting flight and 12 months of waiting that had preceded it. The knowledge that my parents were at the arrivals gate with a thermos of tea and some Vegemite on toast, ready to drive me home through the cold winter morning—because in Australia, the toilet and the seasons go backwards—only added to my sense of anticipation as the landing wheels descended and my ears started to pop.

I am home, if only for a few weeks. My first days back were full of readjustments—driving on the left, saying "mobile" instead of "cell" and the dreaded 14-hour time difference. The people around me have had to adjust a little too. To my Australian friends and relatives, I sound unforgivably American when I speak. It's not just my accent that has changed; when I open my mouth, it's usually to talk about American politics, American culture, and my new life on the other side of world.

As I prepared to fly here, I intended to write be about my home country, and what a wonderful country it is. But the Australia I'm visiting this August doesn't feel like the hometown I left three years ago. This place feels more like New York than ever, and not in a good way.

Growing up with an American mother and an Aussie father, I often heard my parents compare the two countries, especially when it came to education and culture. It's still unclear to me which country has a better education system or a healthier national culture—there are strong arguments in favor of each. But what has become clear to me is that in my years away, many of the best parts of our Australian culture, the ones we offer up as evidence of our nation's superiority, have noticeably declined.

Australians will often proudly tell you how "laid-back" we are as a people. Whether it's the influence of the beach culture or the long tradition as a rural nation, we pride ourselves on the fact that life here moves at a slower pace. Australians, we tell ourselves, are relaxed, easygoing and friendly. Even on the streets of large cities like Sydney or Melbourne, we insist, you won't feel the frantic urgency and impatience so often experienced in New York or Boston.

Australians are not easily fussed, and not easily provoked into displays of strong emotions, unless sport of some kind is involved. Perhaps it's the Olympic Games and our rousing performance in the pool that are throwing off my observations but the Australia, and specifically Sydney, that I'm visiting this August is not the easygoing place I remember it being. In fact, it feels decidedly like the East Coast.

In New York, every morning on my way to work I was confronted by the enormous and melodramatic headlines of the National Enquirer in the subway. Heading home, I had hoped that the front pages in Sydney wouldn't be totally overrun by mindless and salacious gossip. But the Games have brought with them the irresistible temptation to tell, and more often to fabricate inspirational and heartbreaking tales, demonstrating, sadly, that tabloid journalism is alive and well in Australia. The Olympics have brought out the very worst of Australian journalism with sexist headlines and Chariots of Fire-esque tales concocted from even the most insignificant of results.

Although the Olympics have brought out the worst in the Australian media, they have, as always, brought out the best in the Australian people. Australians are defying their reputations for slow-paced, easygoing friendliness because sports are one of the very few things Australians get really riled up about. When sport is involved, our usual state of national relaxation is replaced by our own odd brand of national pride—a sense that we're very good at a few things, and we'll do our best to wipe the floor (or in this case the pool) in those events. As for everything else, it's business as usual: we'll give it a shot, do our best and not take ourselves too seriously.

To quote Qantas yet again, that is the spirit of Australia.