The Church of Lady Gaga 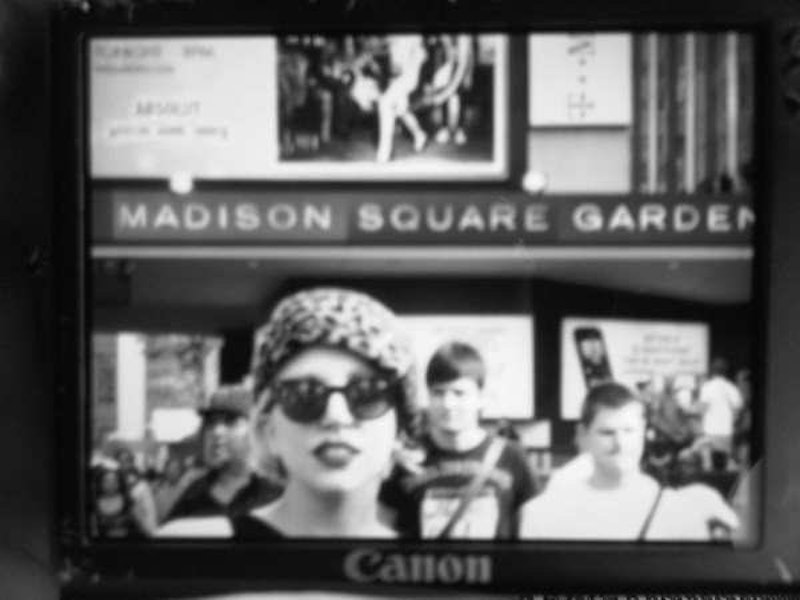 I was at Lady Gaga’s sold-out Madison Square Garden concert on July 7. My friends and I were so busy perfecting our outfits, though, that we rolled into Garden a song too late. But we looked fabulous when we got there, and that’s what really counts.

As soon as we get past security, chanting “ra ra rah ah ahhh” in excitement on the climb up to our seats, everybody starts taking our picture, and we start popping photos back. Everybody is in sunglasses, headpieces on, blond wigs, leggings, panties, bras, chains and cigarette sunglasses, it’s all so Gagagagagagagagagaga.

I’d originally planned to go in a fabulous v-neck shirt covered entirely in mirrors, but by the time I came up with the idea it was already too late. I scoured Manhattan, but the only mirrors I could find were the wrong size, and by the time I finished the shirt it looked like a hot ass mess. Way too costume-like, and I don’t love it when people wear outfits that are too “costumey.” A costumey outfit is not believable. And that’s what makes Gaga’s style work in the first place. No matter how ridiculous it is, we believe it.

Fashion is probably the most exciting thing about going to a Lady Gaga concert, or a concert of another such diva. Planning your outfit, seeing everybody else’s outfits play out, is part of the show. Fans come dressed up as kooky and wild as they can. You engage your own creativity to become your ideal self, the self you would be if there were a Lady Gaga concert every day.

By any account, the Gaga’s Monster Ball was spectacular. Cone bras jizzing out fire, a piano hidden in a green Volkswagen, a random person from the audience plucked from a Nobody Seat and deposited in the front row, LG playing the piano backwards, LG playing the piano with the ass, LG in couture blood—you know, a typical Wednesday night for Lady GayGay.

But for me, the most amazing part of the whole extravaganza was completely unrelated to music or big theatrics. I really felt those tender moments when Gaga told the sprawling crowd that we can be “whoever the Fuck” we want to be. It’s that part of the show where Gaga morphs from pop icon to spiritual ringleader.   A photo that popped up on her Twitter the afternoon of her Tuesday night concert was a black and white image of Gaga in disguise, standing right out in front of the Garden like a normal tourist, taking a picture of herself with her own billboard at the background.   If I had to fill in the thought bubble, it’d say: “I’m just a little girl from New York City who’s about to light Madison Square Garden on fire.” It freaks me out to think about having something that millions of people want to see—to think that tonight, 20,000 people are going to come watch you perform in this big arena. What’s it like to walk out on stage at a concert, where you are the main course, especially when it’s your hometown stadium? What’s the emotion of walking out in front of a packed house of 20,000 people? And how great does it all feel when you’ve wanted nothing more than to be that famous and to have finally achieved it?

At one point in the concert, Gaga panders to the audience: “I remember when I used to come to concerts here and stand right where you are right now, looking at some bitch on a stage, wishing I could be her.”

And look—now she is her.

Most reviews of Lady Gaga’s tour foam on about the music and the outfits, all of which are fabulous. But to me, that line was immediately touching, if only because it felt so incredibly sincere—sincere enough that at the last song, “Bad Romance,” Gaga stands still, crying, obtrusive outfit and all, and the look on her face is one of absolute appreciation.

Despite the money, the number of singles or albums sold, the number of hit songs in a row, the YouTube hits, the magazine covers, the outfits, here was a face of awe, an “I can’t believe this has happened to me” type of thing. As I watched her, it almost made me cry with her. Meet Human Gaga, the one beneath the glitz and outfits. Here she is, The World’s Most Famous Person, playing her hometown arena, where she has seen dozens of other bitches perform. And now, she’s right there playing three sold-out shows.

If you stop and think about that for a second, it’s simply beautiful and inspirational.