The Allure of Satanic Conspiracy

In dire times, it's not hard to see why people are prone to panic. 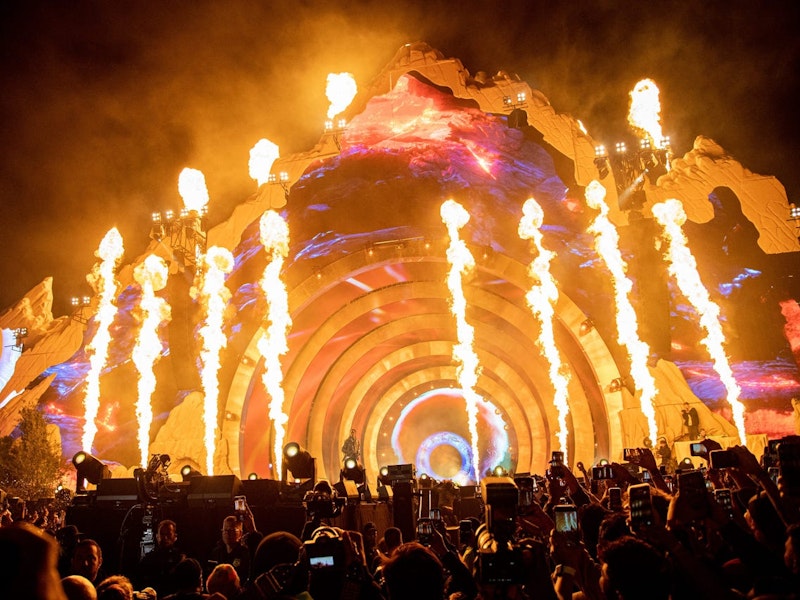 The deaths of nine young people at the Astroworld festival have sparked justified outrage over the management of the event, but also a new wave of online conspiracy.

TikTok, the social media home of Gen Z, is awash with chatter that the tragic festivals deaths were the result of an insidious Satanic ritual, where young lives were sacrificed for a villainous elite.

TikTok videos attached to the phrases “astroworld illuminati” and “astroworld satanic” have grown following the event, with young people speculating about imagery used at the festival and accusing Travis Scott and festival organizers as being part of a demonic cult. This Gen Z version of satanic conspiracy has much in common with its more Boomer-equivalent, QAnon, in that a sinful elite are orchestrating tragedy to advance their own wealth and power.

Satanic panic, particularly in the United States, is nothing new. The1980s saw a wave of conspiracy theories related to so-called satanic ritual abuse, with “recovered memories” of human sacrifices and occult rituals for a satanic elite. Most academic commentary on satanic conspiracies treat the phenomena like any other form of “misinformation” readily spread through mass media, simply the natural result of unregulated social media networks and “Internet bubbles.”

However, there’s a deeper existential longing underpinning the allure of satanic conspiracy that’s worthy of exploration. One connected to our current age of, as sociologist Max Weber put it, disenchantment. We live in highly rationalized times, where spirituality has lost its cogency and a mutually dependent ethos of utilitarianism and productivity cage our inner experience.

As philosopher Byung-Chul Han has noted, we’re living in the time of the “achievement-subject”—a kind of neurotic self-maximizing agent whose never-ending goal is to construct the perfect self-image. This state of mind isn’t voluntary, it’s an inevitable result of a glut of productivist propaganda telling us to be healthy, morally righteous and influential.

The early-20th century social theorist (and pornographer) Georges Bataille is probably the most suitable intellectual for understanding the appeal of dark fantasy in our age of over-thinking. For Bataille, civilization is the result of a tension between two social contradictory impulses: the homogenous and the heterogenous. The homogenous describes social impulses that provide structure: production, rationality, specialization, organization, conservation, predictability and preservation. These are the utilitarian collective goals of society in action, of which each citizen is one part of the whole.

The heterogenous refers to all that can’t be rationalized and assimilated into the homogenous: violence, criminality, insanity, perversion, disorder, rowdiness, intoxication—all of which provide potential avenues for experiences of the sacred.

Our current age is one of over-homogeneity, leading to a longing for anti-social symbolism to meet our desires for the heterogenous and the sacred.

Underlying the apparent self-seriousness of both TikTok and QAnon conspiracy theorists is the intense enjoyment of occupying a world of the grotesque, macabre and inhuman.

You can see this in the oddly specific imagery used.

Even in the days of satanic ritual abuse hysteria, the imagery put forward about the satanic elite—impregnating children only to have the child mothers eat their newborns soon after to birth—reflected a very creative kind of dark fantasy.

It seems evident that the motivations of satanic conspiracy theorists aren’t truth-telling or political activism, but a kind of perverse enjoyment in wicked spectacle. Their behavior is similar to fans of the True Crime genre who, no matter how many times they protest their earnest intellectual interest in “criminal psychology,” are motivated by a perverse enjoyment in grisly details.

In this way the motivations of conspiracy theorists are perfectly sane: conspiracy allows some pleasurable relief from an excess of rationalism and self-marketing. However, there are better ways to engage in our darker impulses.

Bataille described various methods for engaging in heterogenous pleasures while avoiding the destruction of others or oneself. In particular he praised:

This provides some hope that the young people taken in by satanic conspiracies can channel this creative energy away from the exploitation of real-life tragedy into a fulfilling engagement with transgressive art and fantasy.