Swallowed by the Mainstream

The line between pop and underground tastes can be erased quicker than ever nowadays. 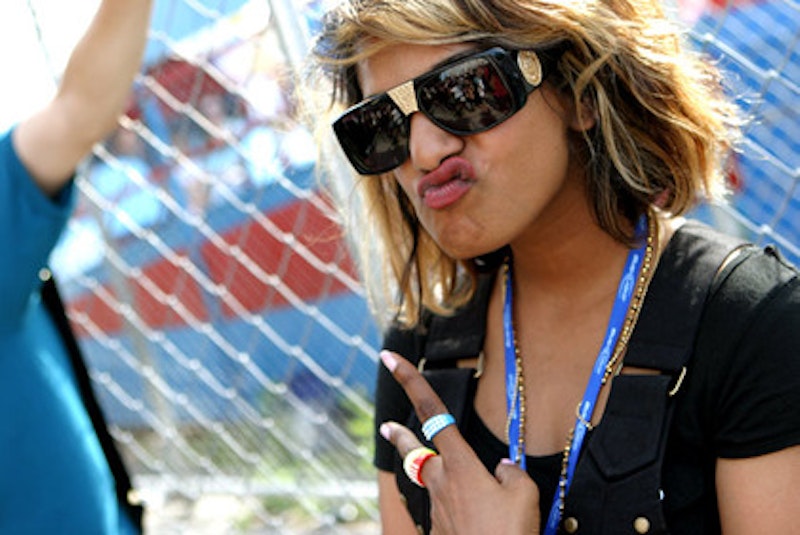 I’m at this gay club in the East Village with my best friend Casey. Obnoxiously, the name of the club is Boyzroom because it’s only for boys. LOLz. Get it? Boyzroom. It’s this hedonistic den of sweat, ass, pornography, drag queens and NYU students who morph into go-go boys by night. The highlight of the night for Casey is “Go Go Idol,” where scores of unqualified men from the audience volunteer to take their cocks out for public appraisal. Typically, I would never be caught dead here. Gay clubs are all the same, mainstream and boring, and this one is no different.  The thing I hate most about gay clubs, though, is the awful music. It’s just pop song after pop song after pop song.

All the sudden and much to my surprise, the DJ whips out an M.I.A. track. At first I was completely stoked to hear some indie music. But then I got a hold of myself and thought: Wait...M.I.A. in a mainstream gay club. Is she becoming too popular? Do they even know who she is?

I used to be that boy who thrived off of going to gay clubs to hear remixes of every song on the Top 40. Then one night Casey and I happened upon this hipster dance party in New York, and we went there religiously for a whole year. I’ll tell you, what brought me there every week, aside from the possibility of wearing gold leggings and even besides the fact that the bouncer always let me in for free, was the music. The music—and at first I knew none of it—was amazing. None of this Boyzroom pop shit. The music was energetic, and that excitement reverberated throughout the entire place. I don’t think I’ve ever danced so hard or felt so good about dancing to music in my life.

What pisses me off right now is that the mainstream music industry totally tries to capitalize on hipster dance music and the fashions that make the “underground” scene so interesting. Every time I think about that inflatable Katy Perry bitch a small part of me dies. She’s the ultimate incarnation of borrowing from and then popularizing an underground scene. Or what about the countless Indie bands who have had songs on the soundtracks for popular TV shows like Gossip Girl? And what about Rihanna—who I actually like—and her mixture of punk and goth style with the boringness of pop song constraint and predictability? If RiRi abandoned her pop-queen sensibility, she’d probably be totally hot as the lead singer of a “The” band.

Indie acts get swallowed, packaged and regurgitated by the mainstream all the time. That’s how mainstream pop culture works. All aspects of it need to be uniform and predictable, not deviant and interesting. Any and all edge must be completely obliterated. Pop music relies on the same chorus lines; the same two chord progressions; the same three subjects.

Non-mainstream art, on the other hand, thrives on expression. It’s raw, unprocessed, weird, risky, and doesn’t give a fuck if it fits into the mainstream or not. Just think of bands like The Gossip, whose lead singer is a fat dykon who sings about chasing vajayjays and being fat. Tell me where you will find that in the Top 40.

Now, of course there’s the other side of the coin, too, when Indie rock bands decide to “sell out” or become “too poppy” for aural pleasure. Everybody knows a hipster who gets his irony in a bunch when a favorite garage band becomes “too popular.” Kings of Leon, for instance, recently released a new album, Only By the Night, and it debuted at number 4 on the Billboard chart. Guess what? It totally sucks. It’s ballad-y, slow, inorganic horse dong. Their last album, Because of the Times, feels so much more urgent than the current popular load of crap. Despite being hugely successful in Europe, especially in the UK, they’re obviously trying to boringify themselves for an American audience. I get it.

I don’t really mind that KOL “sold out.” Because you know what? Everybody sells out at some point—hey, you gotta make that skrilla. What I mind is when your music becomes boring because you completely bleach out what made you interesting, just so that you can fit in with Mainstream pop standards of “good music.”

When that New York hipster dance party I frequented ended awhile back, Casey and I were thrown into nightlife purgatory. We found another Brooklyn-based place called Sugarland. It was Brooklyn, so we thought it’d be hipstered out. NO! Pop song after pop song.