Maryland remains unclassifiable, even as the rest of the country gets split into easy divisions. 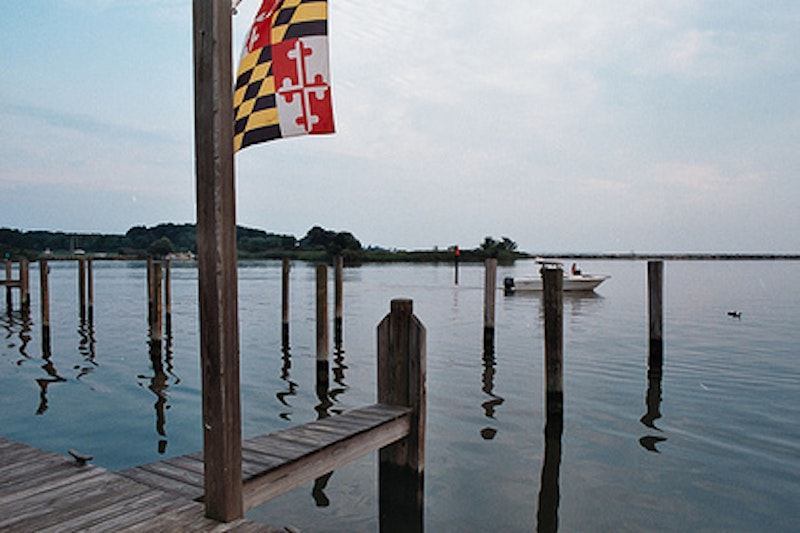 Photo by Here in Van Nuys.

She is not dead, nor deaf, nor dumb-
Huzza! She spurns the Northern scum!
She breathes! She burns! She'll come! She'll come!
Maryland! My Maryland!

Those are the last four lines of “Maryland, My Maryland.” For 364 days each year, no one really cares about the state’s official song. But during the Preakness, the second leg of horse racing’s Triple Crown and nadir of human society, the song makes its grand entrance, played before 100,000 inebriates too drunk or stoned to hear.

It’s a wonderful tradition, a nice addition to the topless women, pools of human excrement, men urinating on other human beings, underage drinking (like, really underage… I’m talking about 14-year-olds), brawls between Philadelphia Eagles and New York Giants fans, and 30-minute-long betting lines that make the Preakness the glorious event it really is.

Bored at work a couple of summers ago, I was daydreaming about the horrible depths of the human condition, which led me to reminisce about my experiences at Preakness, and the state song wandered into my head. As a proud Marylander, I decided that I really ought to know all the words to our state’s anthem. So I looked up the lyrics. And, uh, first of all, there are way too many words to memorize (nine stanzas). Second of all, why on earth is the Maryland state song a rabble-rouser to oust Union troops from Baltimore?

Being from the glorious Old Line State allows me the privilege of meeting people from other parts of the country, telling them I’m from Maryland and seeing their reaction. I’ve been called a Yankee and a Confederate. People laugh at me for saying “y’all” and accuse me of talking like a Northerner. A girl once asked if I was from New Jersey and when I said I was from Maryland, she responded, “Oh. Same thing.” I’m still angry about it.

People just don’t know what to make of Maryland. Anywhere north and you are definitely in the North. Anywhere south and you are definitely in the South. Just a little west and you find yourself in the Midwest. From my town—smack dab in the middle of the state—you are closer to Cleveland than Boston (by two hours!), almost equidistant from Pittsburgh and New York, a little over two hours from Philadelphia and Richmond, 15 minutes from Baltimore and 40 from Washington. I live south of the Mason-Dixon Line.

According to the U.S. government, I am a Southerner. Every new study that comes out talking about how fat Southerners are includes Marylanders. Yet, culturally, I don’t know if I’d call us the South. It doesn’t pass the Facebook Test: I would never join a group like “University of Michigan Southerners” or anything like that. We think Southerners are self-righteous, self-aggrandizing, provincial yokels, despite the fact that we think we share their inherent outspokenness and willingness to chat with you. But we also like to distance ourselves from the North. I hate being called a Yankee. We typically think Northerners are unfriendly, snobby, and out of touch. We don’t want to be associated with them, either.

When I was a little kid in the Cub Scouts, we spent countless hours camping at Civil War battlegrounds and checking out Civil War memorials. I was raised to root for the Union in these stories, fully aware of Maryland’s status as both a slave state and a Union one. I was taught to embrace Maryland’s status as a northern state, a champion of freedom and equality, and I remember my heart racing during stories of Northern triumph over Rebel forces. I’d never heard of “The War of Northern Aggression” until I went further south.

Yet Baltimore has more Confederate memorials than Union. Seeing the old Confederate Stars and Bars flag flying in front of some old house isn’t so uncommon. On class field trips to places like Gettysburg, kids would always half-jokingly buy “THE SOUTH WILL RISE AGAIN” shirts, flags, and other paraphernalia. We have plantation mansions and tobacco fields littering the landscape. The sign for the new McMansion development up the street advertises “Fine Southern Living.”

By the time you read this, I’ll be gone, moved away, a Marylander in spirit only. Within a few weeks, I’ll probably have a new driver’s license and new license plates for the state of Michigan. Everyone has an idea of what it means to be from Michigan. You are Midwestern. You drive American cars. American Pie took place there. Michigan football is—uh, usually—some of the best. It’s a good old fashioned, All-America, small town-living, Jesus-loving, 80s music is still a little too popular, hockey-playing, down-to-earth state. That and it’s fucking cold in the winter.

As I prepared to leave, I realized that Maryland is just an unknown quantity to most. Despite the fact that more people have probably been to Maryland than Montana, everyone has an idea of what Montana is. It stands for something. It’s a surefire part of a region. Even if the judgments are wrong, people can still tell basic things about it. It’s sparsely populated. There are lots of mountains and cattle. It snows a lot there. You don’t need Wikipedia for that.

But people can’t even tell if it snows in Maryland (it does). Here, go through a list of states in the U.S. I guarantee you that each one will have stigmas for you. Nevada = gambling problem. California = liberal tree-hugging homosexual socialists. West Virginia = marrying your cousin. New Jersey = trash. You can at least guess what the weather is like.

I live on the edge of suburbia. I am a half-mile from rural farmland. I am two miles from a housing project. Thirty miles takes me to: the ocean, mountains, a city with a top-20 population larger than Boston and D.C., forests, marshes, exurbs, inner-ring suburbs, and our nation’s capital. One Maryland nickname is “America in Miniature,” and it’s actually pretty accurate.

As pleasant as all that sounds, sometimes I long for an identity. Americans love classifications, and I’m no different. But Marylanders have no base stereotypes to make light of or embrace. When people make a snap judgment about where I’m from, I never know what that judgment will be. When Sarah Palin rages against East Coast Elitists, I know she isn’t talking about South Carolina or Virginia, but is she talking about me?