Steaming Up the Office

The story of Debrahlee Lorenzana. 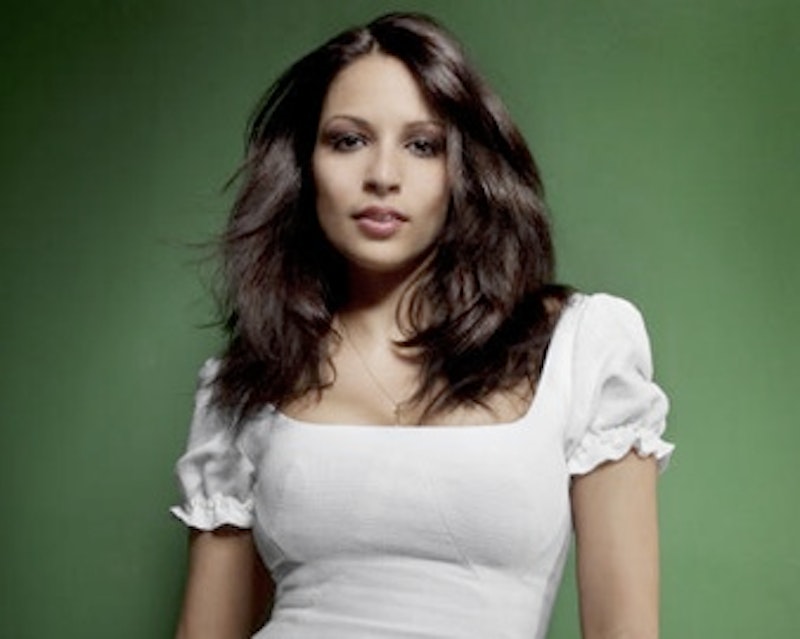 Can you be too sexy for the office? Debrahlee Lorenzana—the Hottest Chick in America right now—just got fired from Citibank in Midtown Manhattan for being too sexy. So, yes! The suits at Citi apparently told the 33-year-old Sofia Vergara lookalike from Queens that she was dressed inappropriately for the workplace. She claims that they ordered her “to lay off turtlenecks, pencil skirts and fitted suits because clingy clothes were drawing too much attention in the workplace.”

And now she’s suing their asses for sexual harassment. "I'm not going to go eat and gain 50 or 100 pounds because my job wants me to be the same size as everyone else," she told New York’s Daily News. Work, girlfriend! Ms. Thing might be hot, but she is nobody’s fool.

Okay, so let’s just get this out the way. Have you seen pictures of her? I’m a gay dude and everything but Holy Dior! Even I can admit that this girl is smoking hot. Say whatever you want, but it’s just the truth. The only reason this story has made any news is because she really is on fire and has, um, “assets.”  Do you think anybody would care about this if she was fat and frumped out?

All the photographs of Ms. Thing I’ve seen emphasize how sexy she is, and in more than one shot her face is turned away from the camera and we see the outline of her junk. The media is eating her up, and it’s only a matter of time before she has a blog, media appearances, an album, a Barbie doll and a book deal. Turtleneck or not, Ms. Thing could be rolling around in a leopard print Snuggie with a matching sequined cowboy hat and still put the “sssss” in “sizzle.” Most of us would kill to be that sexy. And now, she’s about to take Citibank to the cleaners.

Oh you want me to lay off turtlenecks, huh? We’ll see about that.

I’m-Too-Sexy Gate raises important issues about women, fashion and the workplace, and in general there are two camps: the “I dress fabulous no matter where I go” camp and the “I only wear beige because it makes me completely uninteresting and for the better” camp. The first camp is about personality and being yourself, while the second is about suppressing yourself For The Greater Good of the Company. But why do folks think that our fashion choices have any impact on the quality of the work we do?

I once led a discussion about fashion and academia, and everybody knows that academia and the “f” word (fashion) don’t get along. One professor emphasized that everybody should be boring, avoiding fancy clothes because they are not only distracting, but they give the impression that you’re not doing real work because you’re too wrapped up in your appearance. How could you bother with that Very Important File when there are more serious things to worry about, like whether or not your weave is in good.

The other professor on the panel said that she dresses to express herself, and that as long as she’s producing top quality scholarship, what difference does it make if she’s got on the hottest Balenciaga when she gives a talk at the national conference. Right!

Thank God the boundaries are a bit looser if you work fashion, like I do, and can wear a gold sequin bolero to work, like I did on Wednesday, and still be taken seriously. I was so afraid to wear that bolero, but it was more important for me to be me than to pretend to be somebody else. It turns out that one of the people I work with said that she was glad to see me brighten up the office with my bolero. So, yay.

But I’ve been very careful not to wear tank tops to work, because I know that’s too sexy. So what does it mean to look “too” sexy at work? That’s the thing that cracks me up about Ms. Thing’s Citibank lawsuit, which is so drenched in sexual harassment that Citi should just straight up give her a $20 million settlement today and end the bad press. These jokers thought that they could get away with covering up their hard-ons by saying that Ms. Thing was too fashionable, too revealing, too frivolous, not serious, not getting any work done. Leave it to a man to try to intimidate a powerful, strong woman whom he’s also sexually interested in. It’s not like she was coming to work Jenna Jameson style, vadge all out, boobs rolling around, briefcase in hand.

“Sorry, Boss, I couldn’t finish that deposition. My turtleneck was just too tight.”

Not only was it sexual harassment and blatant sexism on Citibank’s part, but it was also totally dumb. Looks are deceiving, and I bet Citi didn’t suspect the poor little mommy would sue them and get national attention overnight. Ms. Thing is a smart cookie—she knows she’s hot, she knew they were wrong, and bam!

If anything, Citibank was stupid to let Ms. Thing go, since research shows that everybody responds positively to better looking people—even babies! I am already fully prepared to go over to her desk and open up however many credit cards she tells me I need.