Scout's Honor: I Carry a Pocketknife

A two-hanky lament for the lost accessories, and manners, of another era. 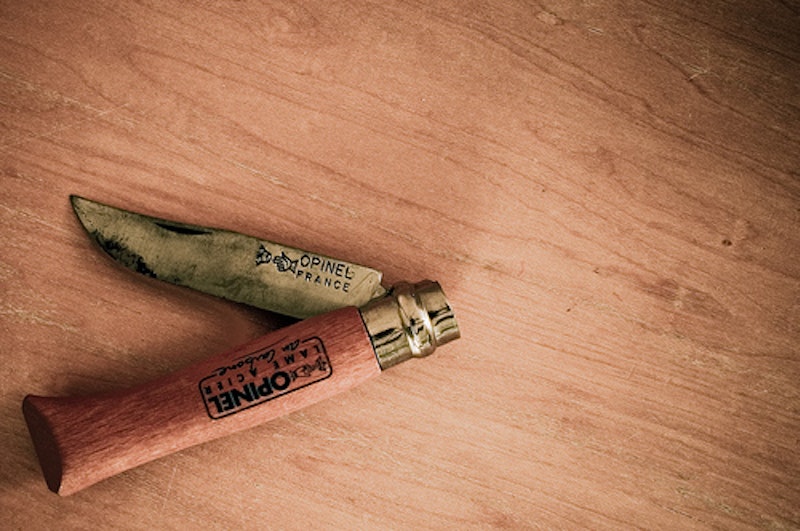 A couple of weeks ago, an older brother rang the house to offer best wishes upon the occasion of my 54th birthday. We jawed about UK politics—he lives in London most of the year—Neil Young, the fine new memoir by Walter Kirn, Lost in the Meritocracy, and, unsurprisingly for two men in their 50s, our respective health updates. Everything ship-shape on the latter, he asked what gifts my wife and sons had presented that morning—it’ ;s not as if I need anything, but that’s not the point—and I told him I was tickled by a Dirty Projectors CD, two polo shirts, a replacement for my sweat-stained Red Sox cap, and above all, a new pocketknife.

Gary chuckled and asked what in the world I’d do with a small knife, maybe kill time by whittling on the back porch, sort of like Opie and Andy down in North Carolina a lifetime ago? In truth, I’ve carried around a pocketknife since first acquiring one as a Cub Scout, and would no sooner leave the house without it than my watch or set of keys. Not long ago, at Reagan National in Washington, D.C., I’d stupidly forgotten to pack my knife in the checked baggage and it was confiscated during the security check, accompanied by a mild dressing down by the fellow in charge. (By the way, I’ve passed by the guards a number of times, knife undetected, ample enough evidence that the vigilance at airports is, charitably, spotty at best.)

The apparently unfashionable—still breaking news to me—pocketknife has any number of important functions, and clipping your toenails with the mini-scissors is just one. I use it to open packages, slitting the tape, or to pop a blister. Not so long ago, it was the perfect tool to cut newspaper articles, which I’d then fold and put in a back pocket—and still do on the increasingly rare instances when I’m the print version of a daily newspaper in, say, a dentist’s office, on a train or in a cab. Sometimes, when trying to negotiate the impossibly tight plastic on a bottle of mustard, ketchup or Tylenol, it’s a lot easier (and safer) to cut the wrapper with a small blade than a kitchen knife. And yes, at times I do like to whittle (a habit my younger son has picked up, much to the astonishment of his brother), stripping the bark off a stray branch and coming up with a splendid, and wholly organic, thanks, spear.

Anyway, if the humble pocketknife was indeed an accessory that’s gone the way of the hat and tie clip, I replied, why was he still toting around a handkerchief every day, another item that’s rarely seen in public anymore. He disabused me of that notion, saying he’d switched over to Kleenexes oh, about 40 years ago, and in fact, it was one of our other brothers who hadn’t kicked the hanky habit. “Really,” Gary said, “handkerchiefs, if not just for show, get so filthy they ought to be cited as a public health violation.” Could be, and don’t be surprised if New York mayor Michael Bloomberg bans handkerchiefs—once he’s finished buying a third term this fall—as part of his continuing campaign to intrude upon the private lives of his constituents.

I queried my hanky-toting brother, who indeed, like my father and uncles before him, unapologetically shrugged it off as a simple ingrained habit. He said, “Yes, I still carry a handkerchief, even in my gym shorts when I’m having a work-out. It serves two functions: First, I have a chronic bad nose, allergic to everything plus a sinus condition. Today, there are pocket packets of tissues available, but that wasn’t the case when I was a kid and had to deal with nose issues. Second, the handkerchief, because of a little bulk, keeps one’s pocket change, bills, and keys from popping out. The idea of a soggy handkerchief being used over and over again might seem a little gross today, but hey, that’s what you did when I was growing up. Frankly, I sometimes took to carrying two or three during hay fever season.”

The defense rests, and I’m buying it.

Besides, there are far, far worse sartorial choices when you think about it. “Casual Fridays,” a 90s abomination, morphed into “casual every days” at around the turn of the century, but really, it’s still disconcerting to me when dining in a decent restaurant (some may remember the era when a maitre d’ scowled if you entered his temple without a coat and tie, and then directing you to a stock room filled with hideous “formal wear”) and you’re surrounded by rubes outfitted in sweats, sneakers and, worst of all, caps emblazoned with loud logos advertising this company or that. Truth be told, when I was 28, and whooping it up in the Algonquin Bar one late evening, the manager gently took me aside (I was wearing a suit), and pointing to the Panama lid atop my head, said, “Sir, gentlemen don’t wear hats inside this establishment.” It left me a little peeved, but the admonishment stuck, and I’ve never committed that particular faux pas ever since.

Likewise, how weird is it when you’re at a ballgame and see grown men decked out in replica jerseys of a favorite player? I’m obviously in the minority in this issue—recently I was at a Red Sox/Orioles game in Baltimore and the throng of geezers (actual or honorary) wearing shirts bearing the names of Pedroia, Ortiz, Lester, Markakis and Roberts numbered in the thousands. Oh, and people still wear their caps backwards, which is the sartorial equivalent of writing or speaking the words “back in the day,” “perfect storm,” “it is what it is” or “you do the math.” Putting on my Bloomberg face here, anyone over the age of 30 wearing a cap backwards ought to be arrested for a misdemeanor; over 50 and it’s a felony; and over 60, it’s 10-20 years in the pen.

There, I’m feeling quite content after getting this out of my system, and don’t even feel the need to express extreme displeasure when on the (fairly rare) occasions I’m in a church and no one else is wearing a coat and tie.