Robin Williams Is Dead and You Feel Sad

So do I, kind of. But it isn't a requirement. 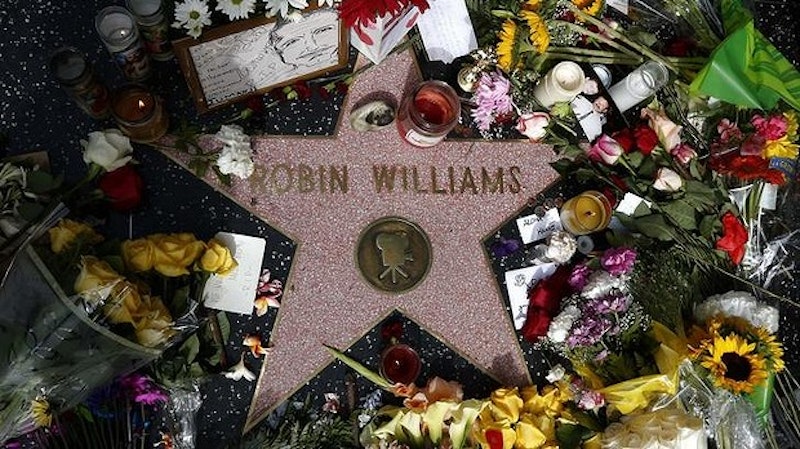 When I saw the headline, I had to stop to make sure I read it right: “Actor Robin Williams Is Dead at 63 of Suspected Suicide.” The world slowed down for a few seconds. I walked heavily to the TV set to see what the news was saying. After a couple of minutes confirming that Williams was dead and the world was sad, I switched to DVR and watched an episode of Veep.

During my interlude of being heavyhearted, this thought floated into my mind: I'm sad about a celebrity. When Marvin Gaye was killed, I didn't really care, and he was someone whose music I loved. When Diana had her car crash, I was surprised by how people wept and mourned. Offhand, I can't recall any other celebrity deaths except Ronald Reagan's, and okay, I did feel that one, but more because it marked the passage of time and my youth.

I'm still not sure why the Williams death twinged me the way it did. I liked his standup shows from the Bush years—I think I saw two movies showcasing them—and I stand in awe of the fascinating Patch Adams, a movie that took a big budget and top-shelf technical crew and produced one of the most bizarre cinematic experiences since Plan 9 from Outer Space. The Williams movie is grotesque just because Hollywood laid itself out so the big man could tell us what was in his heart; those contents turned out to be a firm belief that everyone ought to behave like Robin Williams. Yet the guy doing standup seemed down to earth. He was full of beans, basically, and possessed of the rare ability to be funny while tearing through the fits of extroversion that strike so many men who think they are being funny.

The man who twinkled through his cinematic tears had the kind of big Hollywood heart that goes with a big Hollywood head—talented as he was at his sad-happy shtick, it was insufferable to watch. The motormouth comedian, on the other hand, was a human being using his remarkable gifts just as they deserved. He had come through the usual celebrity crap of drugs, alcohol and auto-messianism, and there he was, a robust middle-aged man leaping about the stage because it was fun for him to do it and fun for us to watch. Life was good; the life force was good.

Now he's dead. Yes, that's sad, and I did feel it for a few minutes. But I've had my brushes with the lives and work of other dead celebrities, and their passing was just an item on the news. Feeling a whole lot about someone you don't know can be a random thing. So let me share and endorse this sentiment voiced by a stranger on Facebook: “I know this sounds cold but I just want to put it out there that it is also ok not to have any feelings when something bad happens to a celebrity.” Feeling sad about Robin Williams doesn't prove that you have a heart, and it doesn't do anything to battle mental illness. Not feeling sad proves nothing either. You didn't know him.