Return of the Parody Bands 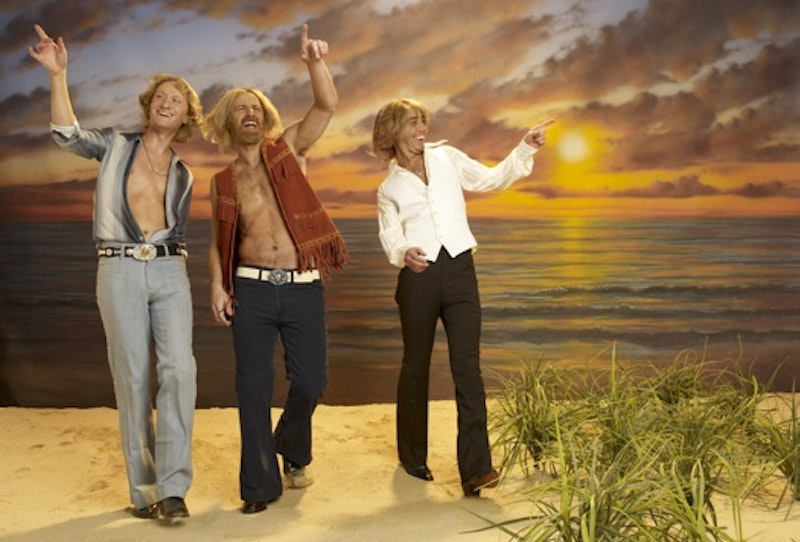 You may have missed the big news that Andy Samberg, Saturday Night Live’s current sub-Adam Sandler (or is he the latest iteration of Jimmy Fallon? Or is there a difference?), last month released Turtleneck & Chain, the second album by his satirical band The Lonely Island. In fact, you may have missed the fact that Samberg’s group, which includes Jorma Taccone and Akiva Schaffer, had ever released a first album, 2009’s Incredibad.

To be fair (if I must), the Island’s mastery of musical mimicry can be effective. The old-school rap salute to The Chronicles of Narnia and Magnolia Bakery, “Lazy Sunday,” still gets over on some of the goofiest lines this side of the Beasties (“You can call us Aaron Burr/From the way we’re droppin’ Hamiltons”); the slow-jam “Dick in a Box,” however, is a million times more effective with the visuals.

Quite how amusing you find something like Turtleneck depends on your stomach for Samberg and company’s overgrown fratboy humor. (If you’ve sat through the unspeakable horrors of Hot Rod or Will Ferrell’s Land of the Lost, you’ll know what I’m talking about.) There’s a lot of mileage gotten from the fact that they’re, you know, thirtysomething white dudes who can like, rap ‘n stuff, fo-shizzle. (The track “No Homo,” ostensibly a rip at homophobic rap lyrics, spirals into lines like “I wanna dress up like Dorothy/And butt fuck a dude while he sixty-nines Morrissey.” Fourteen-year-olds may find it a scream.) And, beyond that, there’s a consistent, gleefully self-aware stupidity that can have its charms when handed out in small and occasional doses (that is, within a three-minute video, not a 40-minute album).

Now comes word that Mike Myers, still reeling from the Love Guru fiasco from three years ago, is getting into the act. Along with current SNL cast member Fred Armisen, Myers has formed The Modern Weepers, a parody of—get this—80s synth bands like Flock of Seagulls and Vince Clarke-era Depeche Mode. According to a story on SplitSider, someone who attended the group’s “secret” show last Friday at a New York club reported that “Myers and Fred Armisen donned accurate Mancunian and Cockney accents respectively, never once breaking character. Their elaborate hits of the synth percussion were accompanied by emphatic and intense stares and lighting blasts to create the dramatic effect so typical of early 80’s new wave.”

Spike Jonze evidently filmed the whole thing for purposes unknown; songs included “There’s A Cream For That,” “Pasta and Red Sauce,” and the admittedly promising title “Don’t Ask Me Personal Questions on the Dancefloor.” Where Myers plans to take this is also a bit mysterious, as he’s supposedly busy playing Keith Moon in a long-gestating biopic, continuing his seemingly eternal quest to try on every British accent ever heard.

Assuming the Weepers eventually wind up on disc, the question still remains: Who exactly buys these things? If stand-up comedy albums have always been a notoriously hard sell (well, unless you’re Steve Martin, George Carlin or Richard Pryor—and it’s the 1970s), musical parody albums go beyond cult status and into the micro-attractive slot. While The Rutles album (and, to a lesser degree, the soundtrack to This Is Spinal Tap) hold up as musical endeavors all their own—in the former’s case, going well beyond just being a souvenir/exploitation of its source—they’re very much the exception to the rule…as anyone who’s endured the bands’ respective follow-ups, Archaeology and Break Like the Wind, can readily attest.

Perhaps it’s best to give the last word to Samberg, who noted in an L.A. Times profile of Lonely Island, “The music industry is in a weird place.”